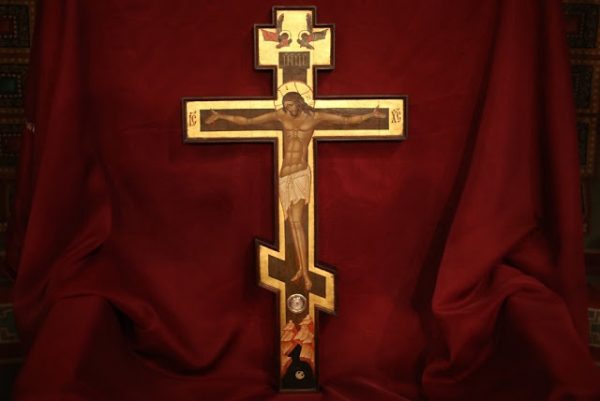 Question: How would you answer a Protestant who considered our veneration of the Cross (bowing down before it and kissing it) to be idolatry?

First we should consider whether or not bowing down before something or kissing it entails the worship of adoration that is due to God alone. If we look at the Scriptures and to Jewish custom, the answer is clearly “No.”

Abraham bowed himself before the people of Hebron (Genesis 23:7, 12); Joseph’s brothers bowed before him (Genesis 42:6; 43:26, 28); and many other examples could be cited that show that bowing was an expression of respect, and bowing to idols is only objectionable because the object in question is in fact an idol, an image of a false deity. In the second commandment we are told that we cannot make an idol, nor may we bow down to them, nor may we worship them (Exodus 20:4-5). The Scriptures also make numerous references to people kissing those that they love. And in Jewish tradition, kissing holy things is a common act that pious Jews engage in several times every day. In his book, “To Pray as a Jew,” Rabbi Hayim Halevy Donin states:

“Kissing is a universal sign of affection.  It is an act of love, an expression of endearment, not only between man and woman, parents and children, but is also the expression of one’s feelings for the ritual objects and the religious duties associated with them.

There are no religious laws that require us to kiss a ritual or holy object.  There is only the force of custom as it develops through the ages. In varying degrees kissing has become an optional commonplace among the Jews as an expression of religious devotion at the following times:

* The tallit [prayer shawl] is kissed just before putting it on.

* The tefillin [phylacteries] are kissed when taken them out of their bag and before replacing them in the bag.

* The mezuzah on the doorpost is sometimes kissed upon entering or leaving a house.  It is done by touching the mezuzah with one’s hand and kissing the fingers that made contact with the mezuzah.

* The Torah is also kissed before one recites the blessings over it. Here it is done by taking the edge of one’s tallit or the sash that is used to tie the scroll together, touching the outside of the scroll with it, and then kissing the tallit or the sash.  Many people place the tallit or sash to the very words where the reading is about to begin.  The sages advised against doing this as it may hasten a wearing away or erasure of the letters.  At best, they recommend touching only the margin area near the line where the reading is about to begin.  In all instances, one should not touch the Torah parchment with one’s bare hand.  The custom of not doing so derives from a special edict issued by the sages prohibiting such contact (Shabbat 14a: OH 147:1).

* The curtain on the Ark (paokhet) is kissed before one opens it, or after closing it when the Torah is put away.

* A siddur [prayer book] and [C]Humash [Jewish Bible] are kissed before putting them away.  These holy books are also kissed if they are accidentally dropped on the floor” (From To Pray as a Jew: A Guide to the Prayer book and the Synagogue Service, (New York: Basic Books [Harper Collins], 1980), p.43f).

And if we look at how the Israelites treated the Ark of the Covenant, it is clear that acts of reverence towards holy things like those we show to the Cross are not at all at odds with their understanding of the Old Testament Law.

The Ark is referred to as “the Footstool” of God’s feet:

“Then David the king stood up upon his feet, and said, Hear me, my brethren, and my people: As for me, I had in mine heart to build an house of rest for the ark of the covenant of the Lord, and for the footstool of our God, and had made ready for the building” (1 Chronicles 28:2).

And the Psalms specifically command us to worship (literally, bow before) the Ark:

And we see that the Israelites in fact did bow before the Ark:

“And Joshua rent his clothes, and fell to the earth upon his face before the Ark of the LORD until the eventide, he and the elders of Israel, and put dust upon their heads” (Joshua 7:6).

Church tradition directly connects the Cross and the Ark of the Covenant, because the Ark is the place of Atonement, and while the Ark is referred to as “the place where His feet have stood” (Psalm 131:7 lxx) and the Cross is the place were Christ’s feet stood, when he made atonement for our sins.

And so there is nothing in our practice that in any way contradicts the Scriptures.

You can listen to a sermon on Psalm 98[99] that addresses this subject by clicking here.