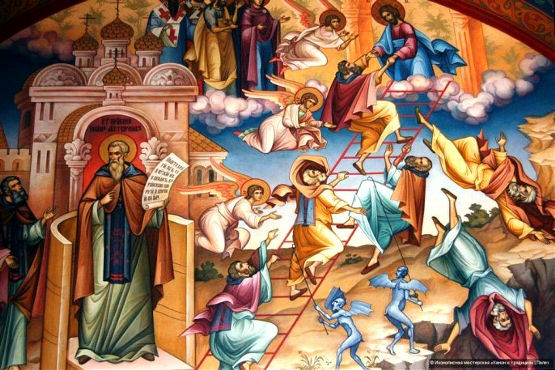 Today, on the Fourth Sunday of Great and Holy Lent, we remember our father among the saints, John Climacus, also known as St. John of the Ladder. According to the synaxarion (life of the saint),

“The celebration of his feast on this day arose from the custom prevalent in the honorable monasteries of starting Great Lent with the reading of his lessons. John describes the method of elevating the soul to God as ascending a ladder. He teaches those who seek salvation how to lay a firm foundation for struggles, how to detect and fight every passion, how to avoid demonic snares, and how to rise from the rudimental virtues to the heights of Godlike love and humility. John of the Ladder came to Mount Sinai at age 16 and remained there, first as a novice under obedience, then as a recluse, and finally as abbot until his eightieth year. One time, his disciple, Moses, fell asleep under the shade of a large stone. John, in prayer in his cell, saw that his disciple was in danger and prayed to God for him. Later, when Moses returned, he fell on his knees and gave thanks to his spiritual father for saving him from certain death. He related how, in a dream, he heard John calling him and he jumped up and, at that moment, the stone tumbled. Had he not jumped, the stone would have crushed him. John Climacus died on March 30, 606.”

We are amazed to hear that he entered into the monastic life, that he fled the world and went into the wilderness of the desert at the age of 16. Most teens at that age are thinking about driving and they are looking towards their future. They want to be happy, to have fun, to daydream, to fall in love, to go to college, to get jobs. They want to build their lives, and yet this young man was looking more intently at his future. He was not looking at the short term goals but at the whole goal of this life…and he figured it out. He found the short-cut to a rich and rewarding life, but it came through great struggle. It came through many trials and tribulations. It came through suffering and even tears. In fact, he figured out one of the immutable laws of the Christian life. In order to save your life, you have to be willing to sacrifice it all, to lose it all, to show your love for God. We can see this for instance in the example of Abraham, who was asked to sacrifice the thing that he loved most. He was asked to sacrifice his son Isaac, to God. Of course we know that God did not make him go through with this, but God tested Abraham’s faith. He wanted to see what was really in his heart.

John Climacus went through great sacrifices and struggles. He sacrificed a “normal” life in order to lose it all for Christ. He went into the wilderness to become a nobody in the eyes of the world, and he came to have a firm grasp on the realities of life because he gained life through his efforts to know God intimately. He gained himself. Instead of being a nobody, he became someone that the Church remembers often. His work is still read all over the world during each and every lent, for roughly the last 13 centuries!

We see a man who was obedient to the life taught by Christ, and reflected in the life of the Church. A man who is obedient through struggles in fasting and prayer. And isn’t this the message of the gospel reading today? The disciples wonder when they are powerless to heal the young man who is possessed by a demon. Yet, the Lord tells them, “this kind, cannot be driven out by anything but prayer and fasting.” It means that prayer and fasting are the keys to a thriving and serious spiritual life. The disciples could not heal in this difficult situation because they lacked the faith and power that become energized through fasting and intensity of prayer. Another way to understand this is that increasing our efforts to fast and pray is a sign of our great faith in God, and this faith is rewarded greatly.

Whatever our situation may be, whether it is demon possession, or sickness or great temptations, or bad habits, or addictions or this worldwide quarantine that we are under. All of these trials can be overcome if we redouble, or “re-triple” our efforts to dedicate them to God through prayer and fasting. Prayer is the door and fasting is the pick that unlocks the door of the heart, our passage to God.

One of the Hymns that we sing today, in honor of this great saint John of the ladder, says “The barren wilderness thou didst make fertile with the streams of thy tears; and by thy deep sighing thou hast given fruit through thy struggles a hundredfold. Accordingly, thou hast become a star for the universe, sparkling with miracles. Therefore, O righteous Father John Climacus, intercede with Christ God to save our souls.”

May we be like St. John Climacus and allow the wilderness of our hearts to become fertile soil for the grace of God to work, through our struggle and even through tears. Have faith that through the efforts of fasting and prayer we can know Christ more intimately and that He will multiply the fruit of our struggles, a hundredfold. He will make us the light of the world and allow us to shine brightly, even during times of darkness. This is possible if you believe because “All things are possible to him who believes.” And glory be to God forever AMEN.

Woven Into The Fabric of Life

In today’s epistle we hear the words of the Apostle Paul to the church in Galatia. This is…

Today we celebrate the Feast of the Entrance of the Mother of God into the Temple in Jerusalem.…

Most viewed articles
A Great Time to Join the Orthodox Church274
First Church in the Antiochian Archdiocese Named for St. Xenia of St. Petersburg Prepares for Feast Day107
The Way of Christ Is The Way of Love82
My World’s Different74
Metropolitan Hilarion: the Church and traditional confessions have done everything possible to improve the situation in Kazakhstan73
Brooklyn Street Co-Named for Antiochian Pastor Who Served a Half Century There72
Patriarch Porfirije of the Serbia: Our Position on the Church Issue in Ukraine Has Not Changed45
4-400×6001
1
Most popular authors
Frederica Matthewes-Green274
Pravmir.com team225
Fr. Theodore Stylianopoulos82
Protopresbyter Themistoklis Mourtzanos74
Peter Samore72