Patriarch of Georgia Ilia II delivered his Christmas service with St. Synod members and priests at the St. Trinity Temple on Christmas Eve, January 6th. In his traditional epistle, the patriarch spoke about the challenges that lie before Christianity, traditions and morality. 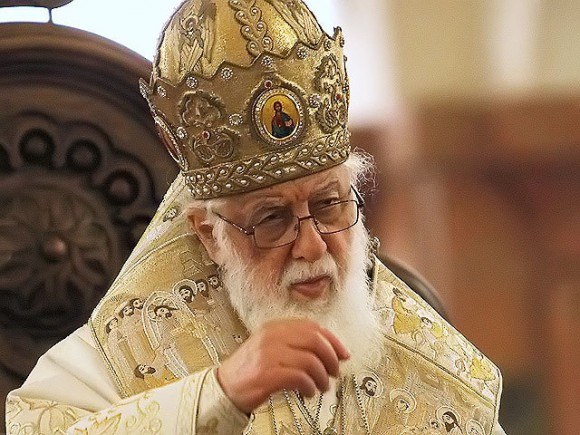 The patriarch said the modern post-modernist era is exceptional in terms of creating new challenges for Christianity. He expressed his great regret regarding the fact that many of those who do not share the ideas of Christianity and have negative attitude to the faith, are commonly identified by representatives of humanism.

“Freedom of choice in pseudo-liberalism considers everything can be equally good. Christianity (religious though in general) teaches us what is good and what is not, and what is unacceptable. What is a sin and what God’s mercy is upon the individual to make a choice. Christian principles are: I respect your right of choice, but not any choice. Everything is allowed, but not everything can be proper. It is obvious that freedom of choice is valuable when you make a choice between the various values. If everything is the same, then there is no sense in making a choice,” the epistle reads.

The patriarch told the perish that the line between lies and truth should not disappear.

Speaking about the minority groups and their right to freedom and choice, Ilia II said that everyone has their own truth. He added that individuals and the church should not be discredited if they are against granting extra privileges to some minority groups.

“The peak of the crisis is to equal relations of sexual minorities with the marriage between a woman and a man and danger to give rights to the same sex couples to adopt a child. Such law perverts the whole idea of marriage and turns a child into a thing that can be owned by anyone,” epistle states.

Patriarch said that the part of the secularism that considers humans to be separated from God and exist in solitude is wrong.

The patriarch also spoke about family values and the challenges in the modern family life. Ilia II said that unbelievable ethnic problems have occurred due to the enormous scientific-technological developments of the modern world. He said that abortions, surrogate motherhood, giving birth to a child through in-vitro fertilization, and gene modification bring unhappiness in the families. This part of the epistles became highly discussed in the society. Many criticized the patriarch for saying that a child born through surrogate motherhood or in vitro fertilization most likely will not be happy.

Many citizens said that children bring happiness to the families, regardless of the way they were born. Some experts working on in vitro fertilization said that the patriarch has many advisers in healthcare, and probably they simply failed to provide Ilia II with the correct information.

The patriarch’s epistle was very interesting and profound, Prime Minister of Georgia, Irakli Gharibahsvili said after the solemn service.

Georgian ministers also spoke about the patriarch’s address and said the epistle sent a number of important messages to the Georgian people.

The Minister of Health, Labour and Social Affairs of Georgia, David Sergeenko, commented on the part of the epistle where Patriarch condemns increased number of abortions in Georgia. Sergeenko agrees with Ilia II saying that the problem definitely exists in Georgia and the ministry is now working on a project, which should help to decrease the number of abortions, [especially selective abortions] without completely banning it.