Source: Aid to the Church in Need
Orthodox priest Igor Pokrovskij has been involved in prisoners' pastoral care for 16 years. In this time he has baptised almost 400 prisoners.
Eva Maria Kolmann | 12 May 2014 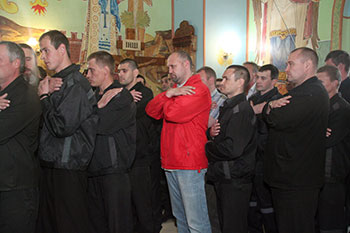 700,000 prisoners are being held in the 755 prisons and labour camps throughout the vast territory of the Russian Federation. When Father Werenfried van Straaten, the founder of the Catholic charity Aid to the Church in Need (ACN), travelled to Siberia in 1994 at the age of 81 he visited such a prison. He promised the prisoners from the bottom of his heart that he would pray for them every day, and he gave them the flowers he himself had received. He thus wanted to show that they were not alone and that there was also love and joy for them. Father Werenfried believed for the whole of his life that people “are better than we think”. It was a special joy for him to see how God’s kingdom spread to the prisons by way of a religious book or radio programme and that souls who appeared to be lost were saved and enlightened. ACN supports the prison pastoral work in Russia by helping to build chapels and by supplying religious literature. Peter Humeniuk, the Head of the charity’s Russian Section, explained: “The Orthodox Church is one of the few institutions in Russia performing good work for the prisoners. Not only the chapels, but also the religious books are received with much gratitude and provide great comfort in this harsh environment. It is wonderful that people find their way to God by this means.” One of the priests doing prison pastoral work is Father Igor Pokrovskij. He reported on the beginnings of this apostolate in Nizhny Novgorod: “When we started our pastoral work in the prison in 1998 we only had a small room in the washhouse to pray in. We bought some paint and coated the walls. Prisoners who were artistically talented then painted icons on the walls. In a separate chamber I heard confession. I soon noticed many changes in the souls. Six months later a group of them already met separately for morning and evening prayers. When I came on Sunday to celebrate the Holy Liturgy they had prepared themselves for confession and Holy Communion during the week by fasting and praying.” Prisoners are also responsible for sexton duties and good order in the chapel. This is a task that demands a high degree of responsibility.

The most important challenge in prison pastoral work is in his experience to get the prisoners to confess their guilt in order to change their lives effectively. Many are afraid to admit their crime even to the priest. “Then I say to them: I am God’s witness, not a public prosecutor. I have the authority to absolve you of your sins in His name. But to enable me to do this you must confess your guilt before God. This is essential if your soul is to be healed from sin.” The prison where Father Igor works now has a proper chapel. In the course of time the priest has baptised almost 400 prisoners. He doesn’t know exactly how many. Many of the former prison inmates Father Igor cared for over the years have now been released. He is still in contact with many of them. He has married them and baptised their children, and many come to church Sunday after Sunday. “We had someone here from a local authority who was serving time for corruption. He had previously been hostile to the Church. If someone wanted to build a place of worship in his district, he would refuse permission. Since his release he has been seen regularly at divine service.” Some people who have successfully built up a new career also support the Church financially and have become genuine benefactors. Others show their affection in the form of small gestures: “We had someone in the prison – his name was Aleksandr – who was serving time for manslaughter. He was also a talented artist. Aleksandr was converted in prison and was released early for good conduct. He married, moved to a village, now has three children and every year at Christmas he brings me two geese.” But there are also prisoners who only come to the chapel to obtain a certificate of good conduct or other advantages. But they can’t pull the wool over this experienced priest’s eyes: “I recognise such people straight away. You can see that they are deceitful.” Father Igor even had a case where an inmate threatened to kill him. But basically his experience has been positive: “In fact many people who have offended are well disposed towards the Church. In my experience, in their sin they think a lot about the meaning of life. People whose lives run smoothly often think they don’t need God.” Although it may appear surprising at first glance, it’s what Jesus said in the Gospel: “It is not the healthy who need a doctor, but the sick.” Father Igor regrets that some people, who in fact have many talents and gifts which they could employ for the good of society, go off the rails and make wrongful use of their intelligence and abilities. He attributes this to the spiritual vacuum which reigns in many people. The time in prison with pastoral care is an opportunity for many to find their way back to the right path.

Most viewed articles
A Great Time to Join the Orthodox Church345
First Church in the Antiochian Archdiocese Named for St. Xenia of St. Petersburg Prepares for Feast Day277
Patriarch Kirill: Not Only People, But Churches Too, Can Depart from God146
My World’s Different104
Brooklyn Street Co-Named for Antiochian Pastor Who Served a Half Century There93
Metropolitan Hilarion: the Church and traditional confessions have done everything possible to improve the situation in Kazakhstan86
Patriarch Porfirije of the Serbia: Our Position on the Church Issue in Ukraine Has Not Changed82
Thoughts on Theophany and Revelation71
A Christianity of the Catacombs11
1
Most popular authors
Pravmir.com team591
Frederica Matthewes-Green345
Protopresbyter Themistoklis Mourtzanos104
Peter Samore93
Elissa Bjeletich71
Archpriest Lawrence Farley11