Images of the Good Shepherd : Icons or not?

In recent years in the Orthodox Church, what has been termed by some as a “new” icon has emerged, and become very popular with many people. It is an icon of Christ the Good Shepherd. All one has to do to find proof of this is do a Google image search on the internet for “Good Shepherd icon,” and so many variations and copies of these icons will appear on the screen.
| 04 May 2009

In recent years in the Orthodox Church, what has been termed by some as a “new” icon has emerged, and become very popular with many people. It is an icon of Christ the Good Shepherd. All one has to do to find proof of this is do a Google image search on the internet for “Good Shepherd icon,” and so many variations and copies of these icons will appear on the screen. I have painted this subject many times, with a considerable amount of questioning the subject matter, and my choice is to paint this image, and consider it an icon. The question that has been asked many times is: Is this a canonical icon? Is it blessable? Is this only an image or an allegorical representation of an aspect of Christ, or truly is it an Orthodox icon? To answer these questions, one must look first at the icons in question, and at the canons that describe what is a canonical icon. 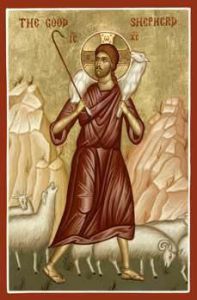 There are several versions of this subject. This first icon (figure 1) is found in the Holy Transfiguration Monastery Store. This icon is a very literal interpretation of the idea of the “Good Shepherd,” showing our Saviour in the midst of a flock of sheep, a crook in his hand, with a lamb on his shoulders. It also shows Him only in His chiton, His red inner garment, which represents His divine nature.  Interestingly, the iconographer did not include the clavi, the shoulder bands, which are typically on the chiton. Christ is shown with all the necessary attributes for the icon to be blessed: the cross in his halo, the “I am” written in Greek, and IC XC.

A second version of this subject, less literal and more philosophical, if you will, is a relatively recent icon painted by Ioannis-Xarilaous Vranos[1],  an iconographer from Greece (figure 2). It came to me through a friend who attended a lecture given by Fr.Thomas Hopko, and he distributed the icon to all those in attendance. Figure 3 is my version of the icon. In the original, Jesus is represented in white. This colour is typically only used to show Jesus’ divinity in particular icons : in the Transfiguration, the Resurrection, and the Ascension, as well as occasional icons of Christ enthroned in Glory. After much prayer for discernment, I decided to represent Our Saviour in his more typical red chiton and blue chimation (the blue outer garment).

What is most unusual about this icon is that Vranos decided to represent the “lamb” in the most figurative sense : he chose to paint a man on Jesus’ shoulders. Whether or not the Gospel was speaking literally or figuratively, the iconographer chose to make this “sheep” one of the Church’s flock. As well, the model shows the man in modern clothing, which is an interesting anachronism in this case, making the metaphor of the Good Shepherd relevant for today’s society. Both this example and the previous example show an iconographic landscape with mountains in the background; rather than a pastoral scene, in my version in particular, Jesus is shown (perhaps) traversing a stream or crossing over the sea. In the Middle Eastern mind-set, the sea represented the most dangerous elements of life. When we pray our Divine Liturgy, we originally prayed for those who travelled by sea and land; now we pray for those who travel by land, sea, air, and in some places, space. That aside, the sea is iconographically represented here. In the upper right-hand corner, there is an iconographic/allegorical representation of the sun. While I did paint this icon as a comission, I did it with some hesitation, as I did not consider the model “canonical.” My opinion of its canonicity has changed, but looking at all the elements of the icon, I believe my hesitation was justified.[2] 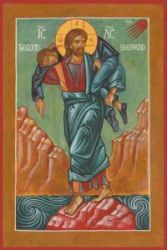 This third version of the subject I believe is the most popular version by far[3]  (figure 4). It is a half bust of Christ the Good Shepherd, here dressed in both His red chiton and blue chimation, with a lamb on His shoulders and a shepherd’s crook in the crook of His arm. He is represented with a cross and Greek “I am” in His halo, the abbreviation of “Jesus Christ” in Greek—the IC XC— and the designation of The Good Shepherd. Most importantly, and uniquely, the icon symbolically shows the cross on which Jesus was crucified, painted naturalistically. For many, this icon touches their hearts, because Jesus’ sacrifice for his “lambs” is shown so clearly in this icon. 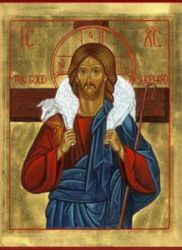 Is this a new icon? The image of the Good Shepherd is hardly new : it was a pagan image. Known as criophoros, a man carrying a sheep on his shoulders, was the pagan symbol for the virtue of  philanthropy. It was connected with Hermes, the Messenger God of the ancient Greek pantheon. Through the process of adoption, adaptation, and taking “whatever is true, whatever is honourable, whatever is just, whatever is pure, whatever is lovely, whatever is gracious, if there is anything of excellence, if there is anything worthy of praise, think about these things”(Philippians 4:8), the image was baptized by the church and “became an obvious symbol for Christ the Good Shepherd. This figure may even have been used for direct representation of Christ, as in the mid-fifth century Mausoleum of Galla Placidia, where a criophoros is shown with halo and cross, surrounded by sheep”[4] (figure 5). Even earlier examples are seen in the catacomb paintings from the third century. Today, especially in Greece, Christ is frequently represented as the Good Shepherd.

The modern difficulty we have is with the idea of symbolism. Fr Steven Bigham deals with a particular

Is this image, however, acceptable according to the Church’s canons? The canon that deals most specifically with this iconographic question is Canon 82 from the Council of Trullo.

In some picutres of the venerable icons, a lamb is painted to which the Precursor points his finger, which is received as a type of grace, indicating beforehand through the Law, our true Lamb, Christ our God. Embracing therefore the ancient types and shadows as symbols of the truth, and patterns given to the Church, we prefer ‘grace and truth,’ receiving it as the fulfillment of the Law. In order therefore that ‘that which is perfect’ may be delineated to the eyes of all, at least in coloured expression, we decree that the figure in human form of the Lamb who taketh away the sin of the world, Christ our God, be henceforth exhibited in images, instead of the ancient lamb, so that all may understand by means of it the depths of the humiliation of the Word of God, and that we may recall to our memory his conversation in the flesh, his passion and salutary death, and his redemption which was wrought for the whole world.[6] 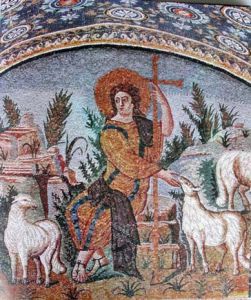 If we look at the image in light of what Canon 82 declares, we see clearly that present in the image of the Good Shepherd, especially the third example, grace and truth. Christ is not shown as a lamb, but as Himself, in the embodiment of the His divine philanthropy. He is present before the cross, the vehicle through which the Lamb of God, Jesus Christ, took away the sin of the world. This icon fully shows us the depths of His humiliation. Each example of this image recalls to our memories His conversation in the flesh, and most of all the third example reminds us of His passion, His salutary death, and the redemption that He wrought for the whole world.

A question remains : is this an Orthodox icon? After much discussion with Bishop Arseni of Joensuu, Finland, one of my instructors in iconography, through my own research on the subject, and through much prayer, in my humble opinion, I would have to say yes, this is truly an Orthodox icon. It fulfils every criterion put forward by Canon 82 of the Council of Trullo. It fulfills every criterion as to being a blessable icon of Christ : the abbreviation of the name, the cross and writing in the halo, the clothing being appropriate. It also proclaims the truth put forward by Christ Himself : “I am the Good Shepherd” (John 10:11). This ancient image resonates to us today, drawing us to Christ Himself in prayer. Let us not quench the Spirit, but embrace the truth this icon proclaims.

[2] In this case, now having found the actual source for the icon, and the iconographer’s explanation or justification for the image, perhaps I will eventually have a better understanding of his decision making. Unfortunately for me, the publication is in Greek.

[3] I do not know the iconographer who painted this image; however, it was featured on the cover of Metropolitan Philip Saliba’s book, And He Leads Them (Concilliar Press, 2001).

[4] Fr Steven Bigham, The Image of God the Father in Orthodox Theology and Iconography, and Other Studies (Torrance CA: Oakwood Publications, 1995), p. 191.