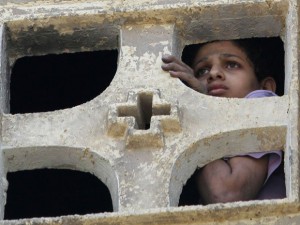 Orthodox Christians celebrated Easter on May 5, and crowds thronged the streets near the Coptic Orthodox Cathedral in Cairo’s Abbassiya district. Traditionally, Easter is a time of celebration and joy here, as Coptic Christians mark the resurrection of Christ, and end their forty day fast. But the mood this year was somber, marred by the memory of a brutal attack on the Cathedral by security forces a month ago.

Although the country has witnessed a spate of attacks on Christian places of worship since the January 2011 mass uprising, last month’s targeting of St. Mark’s Cathedral in Abbassiya served reminded the country’s Coptic Christian community (they comprise 12 percent of Egypt’s population) of their vulnerability as Islamists continue to consolidate power, post revolution.

The assault on the Cathedral in April came as Christian mourners were leaving the building after a funeral mass for five Christians killed in sectarian clashes that took place days earlier in the village of El-Khosous, Qalyubia governorate, which lies to the north of Cairo.

Two Christians were killed in the Abbassiya clashes when security forces outside the Cathedral fired tear gas and birdshot at the mourners who had been chanting slogans against President Morsi and his Muslim Brotherhood supporters.

This latest violence came in the wake of simmering tensions between Muslims and Copts after sporadic incidents of sectarian violence that have forced 100,000 Copts to flee the country since the Muslim Brotherhood came to power.

In a televised address following the Abbassiya clashes, President Morsi described the assault on the Cathedral as “a scathing attack” against him personally. Christians however, dismissed this comment as “mere lip service,” complaining that the President had done little to protect them since coming to power.

In an interview with Reuters a week after the violence, head of the Coptic Orthodox Church Pope Tawadros II of Alexandria and Patriarch of the See of St. Mark said that Egypt’s Christians felt marginalized and rejected in their own country, and that many were fleeing in the wake of this unrest.

Egypt’s Copts took part in protests against the Mubarak regime during the 18-day uprising in January 2011.

Scenes of Coptic Christians forming a ring around Muslim protesters to protect them as they knelt to pray mesmerized viewers watching the mass protests on their TV screens, bringing the hope that Christians would enjoy equal rights as majority Muslims in the ‘new’ Egypt.

There had been sporadic outbreaks of sectarian violence under Mubarak, and some has suggested that it was the attack on a church in Alexandria on New Year’s Eve in 2011 that sparked protests demanding regime change less than two weeks later.

It was not long however, before Egypt’s Coptic Christians came to realize that there would be little change in their situation. Weeks after Mubarak was toppled, the torching of a church in Atfeeh south of Cairo brought home the hard-hitting truth that there was no love lost between Egypt’s Muslims and Christians.

The Atfeeh incident was the first in a wave of attacks on churches and homes of Christians across the country resulting in the deaths of scores of Christians and the forced evacuation of dozens of Coptic families from their homes in Dahshur, Amreya and Rafah during the months that followed.

In an interview broadcast on State TV in September 2012, Morsi failed to acknowledge that there was a sectarian problem that needed the authorities’ attention.

Analysts note that Egypt’s sectarian challenge cannot be addressed while those in power continue to bury their heads in the sand.

Suleiman Shafiq, a writer and researcher specializing in Christians’ rights, recently told a conference on religious freedom in Egypt, post-revolution that “Egypt’s persisting culture of legal impunity for violence and discrimination against Coptic Christians was the root cause behind the sectarian divide.”

Ultra-conservative Salafi preachers, notoriously intolerant of non-Muslims, have been fanning the flames of anti-Christian sentiment via Islamist satellite channels. In April, influential Salafi cleric Yasser Borhami provoked an outcry from moderate Muslims in Egypt when he said that he hates Christians and is repulsed by them.

Blogger/activist Mahmoud Salem filed a civil lawsuit against Borhami, accusing him of inciting violence against the Coptic Christian community, and drawing long-overdue attention to the dangerous rhetoric of radical Sheikhs and to the genuine threat they pose to Egypt’s Coptic minority.

A few months earlier, Abu Shadi, another Salafi cleric, sparked controversy when he said that Christians must pay jizya (a poll tax levied by early Islamist rulers on non-Muslim citizens in their community) or convert to Islam.

A week ago, Muslim Brotherhood leader Abdel Rahman Bahrr issued a fatwa (religious edict) stating that “Muslims can only wish their Christian countrymen Happy Easter provided the greeting does not come at the expense of our Islamic religion.” His words sparked a heated debate over whether or not it was Islamic to wish Christians Happy Easter.

Such divisive statements and other instances of hate speech by Salafis, emboldened by their victory in the recent parliamentary elections, has raised particular concern among Egypt’s Christians over their rights and religious freedom in this predominantly Muslim country, after the revolution.

A provision in the country’s new constitution granting Christians the right to worship freely and build churches (unlike during the Mubarak era when a presidential decree was needed to build churches) has done little to allay those concerns and ease tensions between Muslims and Christians. Morsi, meanwhile, failed to put in an appearance at the Cathedral on Sunday to greet the Pope in person, instead sending a government envoy to represent him.

The envoy was given a cool reception by his Coptic Christian hosts, quite unlike the military envoy and the moderate Grand Sheikh of Al Azhar Ahmed El Tayeb who were both warmly welcomed with cheers and applause from the crowd.

Egypt’s Christians, the majority of whom voted for Ahmed Shafik (a former regime man) in the country’s first presidential election post revolution, largely because of their mistrust of the ruling Islamists, have in recent months participated in anti-government protests demanding that Morsi step down, and calling for a return of the military to power.

“We are tired of being treated as second class citizens and no longer want to feel threatened, submissive or insecure,” said Farid Mitry, a Christian Engineer who works for an oil company.

“The Christians who have stayed in the country will fight the tide of conservatism sweeping Egypt because this is our country too,” he added.