In Egyptian village, Christian shops marked ahead of church attack 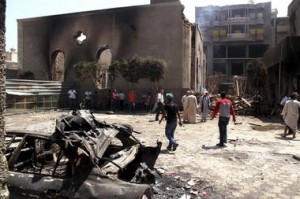 Egyptian gather in the ruins of the Evangelical Church of Malawi after it was ransacked, looted and burned on Thursday by an angry mob, in Malawi, south of Minya, Egypt, Saturday. In the province of Minya south of Cairo, protesters attacked two Christian churches, security officials said.
Roger Anis/El Shorouk Newspaper/AP

Before the violence that shook this small village last week, there were warning signs.

On June 30, when millions of Egyptians took to the streets to protest against now ousted President Mohamed Morsi, residents of Al Nazla marked Christian homes and shops with red graffiti, vowing to protect Morsi’s electoral legitimacy with “blood.”

Relations between Christians and Muslims in the village, which had worsened since Morsi’s election in 2012, grew even more tense as Islamists spread rumors that it was Christians who were behind the protests against Morsi and his ouster by the military on July 3.

Finally, on the morning of Aug. 14, the tension erupted. In Cairo, the police attacked two protest camps full of Morsi supporters, using live ammunition and killing hundreds. When the news reached Al Nazla, a local mosque broadcast through its loudspeakers that Christians were attacking the protesters, say residents. Hundreds of villagers marched on the Saint Virgin MaryChurch. They broke down the gate and flooded the compound, shouting “Allahu akbar” and “Islam is the solution,” according to Christian neighbors.

“First they stole the valuable things, and then they torched the place,” says Sami Awad, a church member who lives across the narrow dirt alley from the church. “Whatever they couldn’t carry, they burned.”

The Coptic Orthodox church had just opened in April after 13 years of construction, in a country where the government strictly curtails building permits for churches. Now, its elaborate dome stands above a ruined, charred interior. The walls are blackened and rubble litters the floor. A picture of Jesus is half burned, the charred edges curling where they were licked by flames.

“The religion of God is Islam,” reads graffiti sprayed in yellow on a wall of the church. Three burned out cars, one of them upside down, rest in the courtyard. Next to the gate, sprayed in black, is another phrase: “Victory or martyrdom.”

The Saint Virgin Mary church in Al Nazla is one of 47 churches and monasteries that have been burned, robbed, or attacked since Aug. 14 in a wave of violence against Christians since the brutal police crackdown on the former president’s supporters, according to Ishak Ibrahim of the Egyptian Initiative for Personal Rights. He adds that dozens of Christian schools, other religious buildings, homes and shops have also been attacked and burned, and seven Christians killed. Police have done little to stop the attacks.

The victims say the attackers are Morsi supporters angered by the deaths in Cairo, and spurred on by Islamist rhetoric blaming Christians for Morsi’s ouster. The attacks are a realization of the long-held fears of many Christians and have prompted deep worry about widening religious violence in Egypt.

Al Nazla – about 60 miles southwest of Cairo near the oasis of Fayoum – is a small village that looks like many other rural Egyptian towns. Narrow and pitted dirt roads winding between brick buildings are clogged by three-wheeled tok-toks, animals, and villagers on foot. The red graffiti marking Christian homes and shops is still visible. “Yes to legitimacy, no to Sisi” reads the message scrawled on one shop, referring to Army chief Gen. Abdel Fattah El Sisi, who ousted Morsi.

The Saint Virgin Mary church’s dome is visible from outside the village, but difficult to see once inside the tangle of alleyways. Inside the church compound, Mr. Awad and other church members described the shock of seeing their neighbors and acquaintances among the angry mob sacking the church.

Relations between Christians and Muslims in the village used to be good, says Awad, who makes his living selling poultry. “We were neighbors and friends, we did business together and talked together. However, when they had to choose between religion and us, they chose religion.” He declined to identify those who attacked the church.

Ezzat Labib, who manages the church’s administration, says things started changing after Morsi was elected last year. “Relationships started becoming more cautious,” he says. “By June 30, it started getting much more tense, because of the accusations that June 30 was controlled and ignited by Copts, even though on the 30th , all people were protesting, Muslims and Christians.”

Islamist figures and websites had accused anti-Morsi protests of being mostly Christian as far back as December. When the mass protests that appeared on June 30 presented an emphatic rejection of Morsi’s year-long presidency, some accused Christians of organizing the protests and making up the bulk of the demonstrators. Such statements only increased when Pope Tawadros II, the patriarch of the Coptic Orthodox Church, stood next to General Sisi, with other religious and political leaders, when the army general announced Morsi’s ouster.

At the camp of Morsi supporters near Cairo’s Rabaa El Adawiya square, organized by the Muslim Brotherhood, some speakers on the protests’s stage railed against Christians and their “betrayal” of Egypt. Attacks against Christians spread throughout Egypt, particularly in southern Egypt where the Christian population is large and sectarian violence common. On August 7, 16 Egyptian rights organizations condemned the Muslim Brotherhood and its allies for using rhetoric that included “clear incitement to violence and religious hatred in order to achieve political gains.” The groups also condemned the government and security forces for failing to protect against sectarian attacks or hold accountable those responsible.

On the morning of the attack in Al Nazla, says Awad, a local mosque broadcast a message around 9 am. “Your brothers in Rabaa El Adawiya are being killed by Jews and Christians,” the loudspeakers boomed, according to Awad and other Christian residents. The crowds attacked the police station before attacking the church, say residents, possibly part of the reason the police did nothing to stop the attack that lasted from around 9:30 am until 7 pm. The attackers even brought trucks to carry away their loot. The police guards that had been posted outside the church walked away when the angry crowds approached, say neighbors. One fire truck that tried to approach the church was repelled by the crowd, and the police never came.

Some Muslim neighbors tried to help put out the fire raging in the church, including Magdy Shaaban. They also successfully protected against attempts to break into or set fire to Christian homes and shops, but near the church, “there were so many attackers, we couldn’t stand against them,” he says.

As the Muslim call to prayer rang out near a monastery that was also looted and torched, Mr. Shaaban says villagers were angered by the Coptic pope’s support for the military and Morsi’s ouster. The attacks occurred when villagers attempting to join the Morsi supporters in Cairo found the roads closed, and turned back to attack the police station and the churches instead, he says. “They went to take revenge on the Christians.”

Shaaban voted for Morsi, and went to Rabaa el Adawiya several times to join the protest against his ouster. He said the attackers were not Muslim Brotherhood members, but “angry people.” He condemned the violence, and helped his neighbors, even allowing two Christian families to sleep at his house after the attacks, because “it’s my duty to protect my neighbors.”

Similar attacks occurred across the country. In Sohag, a large church was burned and a guard outside a church shot. Attackers stopped a Christian couple, asked for their national identity cards, which list citizens’ religion, and then shot the two, says Mr. Ibrahim. The husband was killed, and the wife injured. In Minya and Assiut, multiple churches and dozens of Christian properties were attacked and burned. In many places, police stations were also attacked. A spokesman for the foreign ministry last week cited attacks on police stations as the reason that police failed to respond and protect churches and Christian institutions from attacks.

Ibrahim said there were indications that the violence was somewhat organized. With the exception of Al Nazla and other Fayoum villages, it took place mostly in cities, he says, and in most cases, police stations were attacked before churches. In the Minya province, after an incident of religious violence earlier this month, a local Gamaa Islamiya leader delivered a “threat cloaked in a warning” to Ibrahim about the reaction of Islamists if Rabaa was dispersed.

The government has implicitly accused the Muslim Brotherhood of organizing the violence, which the Brotherhood strongly denies. A spokesman for the Brotherhood’s Freedom and Justice Party said in a statement last week that the party “stands firmly against any attack – even verbal – against churches.” Brotherhood members and a spokesman have accused the security apparatus of carrying out the church attacks in an attempt to smear Islamists.

The Brotherhood said Facebook pages inciting religious violence under the party’s name were fake. One page that appears to be the authentic Facebook page for the FJP in Helwan, south of Cairo, listed accusations against the church, before concluding: “After all this people ask why they burn churches.” The page noted that “burning houses of worship is a crime,” but added: “For every action, there is a reaction.”

Back in Al Nazla, church members said they held a service today despite the state of the sanctuary, and will continue to do so until they can rebuild the church. “We have to pray no matter what happens,” says Mr. Labib. “Even if they burn it to the ground, we will pray here.”