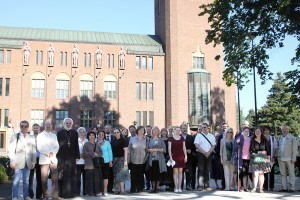 “This year’s conference built on the four previous, and also expanded our range, in linking the discussion of church music with iconography,” said the Rev. Ivan Moody, board chairman of ISOCM, “Not only were musicians discussing their work and its relationship to icons, but we also had a number of joint sessions in which musicologists and iconologists presented their work together.”

The week-long gathering affirms the mission of ISOCM as a place in which like-minded people can come together and share their vision, and learn from others. Conference participants included musicologists, singers, directors, graduate students, composers, researchers, iconographers, iconologists, and those who have an appreciation of the liturgical arts. “One of the highlights of conferences hosted by ISOCM is the gathering of participants from around the world,” said Deacon Petri Nykänen, vice-chair of the ISOCM board. He added, “The presentations were of the highest caliber, and coupled with the divine services provided each of us with the opportunity to worship, learn, and sing together.”

Vespers and the Divine Liturgy were celebrated at the Church of St John the Theologian on the campus of the Finnish Orthodox Seminary and at the local parish of St. Nicholas in Joensuu. Participants joined local faithful in serving, chanting, and leading the singing of responses during the services. The city of Joensuu hosted a reception during the conference, and participants also made a pilgrimage to the New Valamo and Lintula monasteries in Eastern Finland.

“Such a rich and full schedule fills me with pleasure, and with hope for the future of both the ISOCM and these conferences,” said Father Ivan, adding, “Displaying as it does the remarkable richness of Orthodox Christianity and the deep joy we all experience in sharing our traditions and experiences.”

The record number of participants is encouraging during times of uncertainty and contraction, and the variety of topics on all aspects of church music suggest a growing interest and desire to explore the beauty and depth of Orthodox Christianity. Presentation topics ranged from the practical and aesthetic aspects of chant from Serbia, Bulgaria, Albania, and elsewhere, to presentations on early hymnography, newly-composed music, and the correspondences between iconography and hymnography.

On the first day of the conference, the proceedings from the 2011 conference were made available to participants. Copies may also be purchased in advance on the ISOCM website:  http://www.isocm.com/resources/publications/index.html

Founded in 2005, the ISOCM seeks to provide an open platform for musicians, musicologists, singers, and composers that encourages dialogue, the exchange of information and ideas, and inspires cooperation. The Society sees the promotion of communication between East and West as one of its priorities.

For more information about this year’s conference, please visit: http://www.isocm.com/conferences/2013/index.html