The inspiration came out of the blue as I was driving from Vienna to Budapest on August 19, 2006, the feast of the Holy Transfiguration, according to the Julian calendar.I suddenly thought that I should write a musical composition on the Passion story and that this music should be based on the Orthodox liturgical texts from Holy Week.
http://southern-orthodoxy.blogspot.com/2007/03/interview-bishop-hilarion-composer.html | 14 April 2007 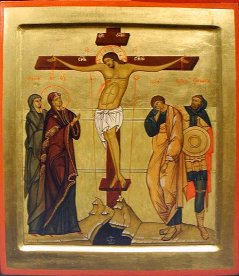 An Interview With A Russian Orthodox Composer: Bishop Hilarion Alfeyev on Music as Prayer

ROME, MARCH 5, 2007 – Music in church should be an avenue to deeper prayer, not a distraction, says a Russian Orthodox bishop and composer.

His Grace Hilarion Alfeyev, Bishop of Vienna and Austria, is the representative of the Russian Orthodox Church to the European Community.

His latest composition, “The Passion According to Matthew,” will be premiered in Moscow on March 27 and then performed in Rome on March 29.

In an interview with ZENIT news agency, Bishop Hilarion discusses his latest composition, the central role of music in the Orthodox liturgy, Christian unity, and some thoughts on Pope Benedict XVI.

Q: When did you receive the inspiration for this musical composition? Why the Passion according to St. Matthew?

Bishop Hilarion: The inspiration came out of the blue as I was driving from Vienna to Budapest on August 19, 2006, the feast of the Holy Transfiguration, according to the Julian calendar.

I suddenly thought that I should write a musical composition on the Passion story and that this music should be based on the Orthodox liturgical texts from Holy Week.

The title, “The Passion According to Matthew,” also came immediately and I had no doubt that I should use St. Matthew’s account of the Passion. By choosing this title I also wanted to declare my indebtedness to J.S. Bach, whose music has always been for me a source of deepest inspiration.

In Budapest, I celebrated the service dedicated to St. Stephen of Hungary on August 20, and on August 21, I drove back to Vienna. As I was driving, the first melodies began to come, and I began to record them in my memory. As soon as I arrived, I started to put them on paper. I then worked very hard for about three weeks.

I canceled one or two international trips, I almost did not respond to phone calls and e-mails, and I could not sleep during nights, because melodies continued to come to my mind even at three o’clock in the morning.

On September 10, the main bulk of work was finished. I left music aside for a couple of months, and then returned to it again in order to make sufficient revisions and to compose new movements instead of some of the original ones which I decided to remove.

In my composition, the Orthodox understanding of the Passion story is reflected. It differs from the understanding that is characteristic of Western religious art, where accent is often laid on Christ’s humanity rather than on his divinity.

Orthodox tradition avoids naturalism in depicting the Passions: On the Orthodox icon of crucifixion, Jesus is depicted dead, not in agony, and his death on the cross is contemplated not as a moment of horror, but as a moment of glory.

The same attitude is reflected in the Orthodox liturgical texts. Moreover, almost every time when these texts mention the Passion, they also mention the Resurrection.

Q: Why will the concert be presented in Rome after presenting it in Moscow?

Bishop Hilarion: This was not my idea: It came from the chief conductor of the Choir of the State Tretyakov Gallery, Alexei Puzakov. He was the first musician who heard my music as I was composing it — I played it to him from Vienna, and he listened through the telephone receiver.

He suggested that it should be performed not only in Moscow, but also in Rome, since Holy Week and Easter coincide this year for Roman Catholics and Orthodox.

In November I showed the score to Vladimir Fedoseyev, and he very kindly agreed to conduct the performance. The dates for both concerts were chosen by Fedoseyev: These were, in fact, the only dates available for the Grand Symphony Orchestra during this year.

Q: If you meet the Pope when you are in Rome for the concert, what will you say to him?

Bishop Hilarion: I would say to him that, in my view, the time has come for a much closer collaboration between the Catholic and the Orthodox Churches.

I do not believe that the restoration of full Eucharistic communion between East and West after almost a millennium of separation is something that is going to happen in the foreseeable future and I do not think that the theological problems that exist between us could be easily solved by the Joint Theological Commission.

But it seems to me that we should not wait until all the problems are solved and full harmony is achieved. It may never happen.

We must begin a much closer collaboration here and now, without any further delays. The challenges we are facing in Europe and elsewhere, such as relativism, militant secularism, radical Islam, are those we could and should address together.

I was deeply satisfied when I read Cardinal Ratzinger’s speech during the conclave in which he declared war on relativism. I also noted that in his Regensburg lecture he went beyond the limits of political correctness because he felt that the issue he was addressing was important. The reaction that followed only confirmed that he had touched the heart of the matter.

Traditional Christianity nowadays needs to be defended from both the external challenges I mentioned, and the internal challenge of growing liberalization of doctrine and morality within some Protestant communities. I feel, and I often say openly that ecumenical relations with the Protestant world become ever more problematic and ever less hopeful.

The gap between traditional and liberal versions of Christianity is widening, and it is mostly Catholics and Orthodox who stay on the traditional side, while many Protestant communities adopt liberal standards.

Q: What role does music have in your personal prayer life?

Bishop Hilarion: Music plays a very important role in the Orthodox liturgy. As a bishop I celebrate liturgy every Sunday and on all feast days. The quality of the choir and the repertoire that it chooses is something of importance for me.

Being formed as a musician from my very early years, I cannot completely dissociate myself from music when it is sung in the church, and even as I am reading liturgical prayers, I continue to hear the singing.

Last summer I composed “The Divine Liturgy” and “The All-Night Vigil” for the choir a cappella. My main aim was to write such music that would not distract from prayer either for me or my parishioners.

Singing in the church should be oriented towards prayer and should not be turned into a concert, as often happens.

The best examples of truly prayerful singing could be found in Russian Znamenny chant, an equivalent of the Western Gregorian chant. This unison chant is simple, but it is meaningful and moving.