(Vatican Radio) The Russian Orthodox Patriarch Kirill is enthusiastic about the pontificate of Pope Francis.  So the Patriarch of Moscow told Cardinal Kurt Koch, president of the Pontifical Council for Promoting Christian Unity, last week in the capital of the Russian Federation.  The Swiss cardinal and Curia official met for the second time with the Russian Orthodox Primate on Wednesday and Thursday, December 18 and 19, 2013.  In a German-language interview with Mario Galgano, Cardinal Koch considers the topics that he discussed with Patriarch Kirill.  [Translated for CWR by Michael J. Miller] 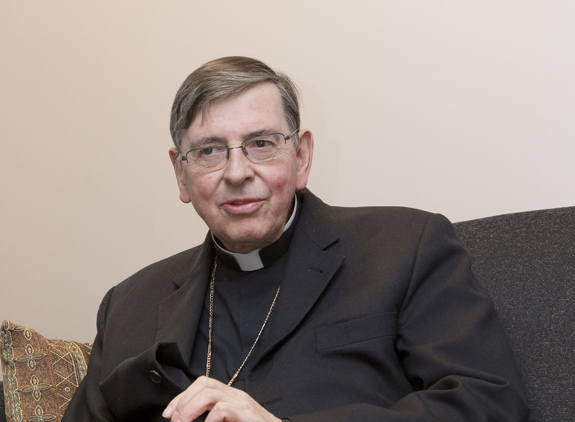 Cardinal Kurt Koch:  Of course it was mainly about the general relationship between the Russian Orthodox Church and the Roman Catholic Church.  But we also conferred about the theological discussions and how it [i.e. the ecumenical dialogue] can continue.  Another topic was the challenge of today’s society for Christians.  The patriarch and I also spoke about the political situation worldwide, however.  In this connection we were very concerned about the situation in Syria and generally in the Near East.

Mario Galgano:  Many people expect that in an official conversation between a representative of the Catholic Church and the Patriarch of the Russian Orthodox Church there will be discussion of a possible meeting with the Pope.  Were there concrete plans for it this time?

Koch:  Again and again there is talk about that.  The one in charge of ecumenical relations for the Russian Orthodox Church, Metropolitan Hilarion, has repeatedly emphasized that there is something more important than the date of the meeting, namely the preparation for it.  And I support that attitude.  It takes time for that, too.

Galgano:  What did Patriarch Kiril say specifically about Pope Francis?

Koch:  He is very pleased with this pontificate and even said so in his first speech.  He especially admires how Pope Francis is leading the Church and his way of dealing with people.  Kirill also mentioned the special emphasis that Pope Francis places on the encounter with the poor.  Another area of discussion is the Pope’s stance toward the family.

Galgano:  In Eastern Europe at the moment the situation is very tense, especially in Ukraine.  There both the Catholic Church and also the Russian Orthodox Church have made statements about the political conflicts.  Was that another topic that you discussed with the patriarch?

Koch:  Ukraine is a topic that is again and again a cause of concern for the Russian Orthodox Church.  Above all they are worried about the Greek-Catholic Church* in Ukraine, which is united with Rome.  This was addressed repeatedly.  But political developments in Ukraine were another topic, because the country is leaning precariously toward a division.  That is a very urgent challenge.

*Note:  At a press conference in Moscow, Cardinal Koch said that both Orthodox and Catholic believers in Ukraine have suffered because of the conflict there between the two faiths.  “Only by recognizing [the grievances on both sides] can we move together into the future.”  Cardinal Koch recalled that the Ukrainian Catholic Church was forcibly dissolved by the Communists and its church buildings were given to Orthodox congregations.   He also noted that present-day grass-roots ecumenism is complicated for Greek Catholics in Ukraine by the fact that there are three competing Orthodox groups there.  “If Orthodoxy in Ukraine were united in one Church, that would be a major step toward solving the problem.”