Iraq without its Christians

Iraqi Christians have long prided themselves on being the indigenous people of Mesopotamia, but now they are fleeing the country, writes Salah Nasrawi 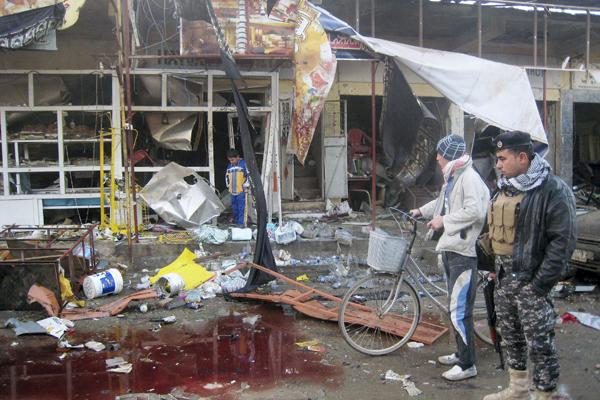 Iraqis inspect the aftermath of a double suicide bomb attack at a market in Tuz Khormato, north of Baghdad (photo: AP)

Ravaged by sectarian violence and persecution, Iraq’s Christians continue to flee into exile, prompting fears that this community, one of the oldest continuous Christian communities in the world, could be facing extinction in its ancient homeland.

Religious and political leaders are blaming Western countries for encouraging the Iraqi Christians to emigrate, triggering old accusations that Western nations are plotting to displace the Christians from their Middle Eastern homelands.

The number of Christians in Iraq has declined by nearly half since the US-led invasion of the country in 2003, according to various estimates, because of political upheaval, attacks, the forced expulsion of the Christians from their home areas and a lack of jobs and economic opportunities.

According to Christian officials, some 61 churches have been attacked in the decade since the US-led invasion of Iraq, with more than 1,000 Christians killed in the violence though not all of them in explicitly targeted attacks.

Nearly half a million Iraqis have died from war-related causes in Iraq since the US-led invasion, according to a study by the British-based group Iraq Body Count that was published last month.

The flow of Iraqi Christians out of the country spiked in 2010 after the Al-Qaeda terror group attacked a church in Baghdad in October of that year. This was the single worst attack on Iraq’s Christians since the US occupation, and it was one that left 50 worshippers and two priests dead.

While many Christians have fled to neighbouring Jordan, Syria and Turkey, others have sought refuge in countries as far as away as Australia, New Zealand, Europe and the United States. Some have moved to Christian safe havens in the Kurdish-controlled areas and cities of Iraq.

Life for Iraq’s remaining Christian population remains extremely difficult. Those who stay in areas under the Baghdad government’s control live in fear of violence, and they are subject to routine intimidation. Unemployment is high among Christians, and some of their businesses, including liquor stores, are often bombed by vigilantes belonging to Islamist fundamentalist groups.

Even those who have fled to Iraq’s Kurdish-controlled north are not better off. Though relatively safe from the bloodshed caused by the nearly daily bombings and sectarian tension in the rest of the country, they face different kinds of threat, such as the seizure of their land and ethnic discrimination.

Most Christians in Kurdistan live in community enclaves in order to feel more secure, and this week political and human-rights activists met in Erbil, the Kurdistan Regional capital, to probe means of combating what they called demographic changes in areas inhabited by Christians in northern Iraq, including those under Kurdish control.

While the consequences of the Christians’ flight may be readily understood, the underlying causes remain unaddressed. Many Iraqis claim that the Christians are not being singled out by mainstream Muslims, but that they have been victims of the nation’s ethno-sectarian divide and violence by extremist groups, such as Al-Qaeda.

They argue that the Christians will be better off if Iraq’s feuding Muslim communities resolve their disputes and forge an all-inclusive political system that also includes minorities such as Christians.

Even many Iraqi Christian activists believe that the flow will stop if the government is able to guarantee security to protect the Christians, stop the land seizures, and moderate demographic changes in Christian-dominated areas and provide Christians with jobs.

Some Iraqi Christians have called for a separate Christian “federal entity” in the north of the country that they hope could guarantee them more autonomy and a better political status.

Iraqi political and Muslim leaders have been outspoken against the violence targeting Christians, while the majority of Iraqis are critical of the abuses. This week, the Shia imam of Friday prayers in the city of Najaf, Sadreddin Al-Qubanchi, pleaded with the country’s Christians not to leave Iraq.

“Iraq is a country for all its sons, and it should not see them emigrate,” he said.

The fear of a total exodus, however, has prompted Church leaders and Christian politicians to appeal for greater efforts to be made to tackle factors that could fuel this flight, including facilities to ease the Iraqi Christians’ migration.

Last week, Pope Francis, the leader of the Roman Catholic Church, summoned several leaders of Middle Eastern churches to Rome in order to discuss the plight of Christians in Iraq and other Middle Eastern countries and to urge them to stay.

The gathering followed a private meeting with 10 heads of Middle Eastern churches on the situation of Christians in Iraq and other parts of the region.

Pope Francis said that the Roman Catholic Church “would not accept” a Middle East without Christians, “who often find themselves forced to flee areas of conflict and unrest in the region”.

Before the meeting some top Catholic bishops had urged action to be taken on what they termed as “the phenomena” of the current migration and the tendencies of some foreign embassies to facilitate the granting of asylum visas for Iraqi Christians.

Iraq’s Chaldean Catholic patriarch, Louis Raphaël I Sako, had requested that this issue be discussed with the heads of the Christian churches and for “practical measures” to be taken to deal with an issue that “threatened the existence” of Iraq’s Christians.

He had earlier criticised Western embassies for offering visas to the rapidly shrinking minority in Iraq.

“It is unfortunate that some embassies are facilitating the migration of Christians, which impoverishes the country of their skills and weakens their brothers who want to stay,” he told a UN-sponsored conference in Baghdad recently.

Gregory Laham, the Syrian patriarch of the Melkite Greek Catholic Church, has also urged European countries not to “encourage Syrian Christians to emigrate” from his country.

After the bishops’ meeting in Rome a statement said Pope Francis was concerned by “the situation of Christians, who suffer in a particularly severe way the consequences of tensions and conflicts in many parts of the Middle East”.

“We will not resign ourselves to imagining a Middle East without Christians,” he said.

Pope Francis has himself been criticised for encouraging emigration, however, after he called in July for “greater compassion” for migrants who make the hazardous crossing across the Mediterranean to southern Europe.

The majority of the Iraqi Christians belong to the ancient Eastern churches whose followers are almost all ethnic Assyrians and Chaldeans. Other denominations include Syriac Orthodox, Armenians and Protestants.

The emigration of Christians from Iraq began in the aftermath of World War I, and it has greatly picked up over the last decade. There were about 1.5 million Christians in Iraq before the 2003 US-led invasion, but now there are about 500,000, according to various assessments.

The roots of the Christian emigration problem in Iraq’s modern history date back to British colonial rule after World War I. On Iraqi independence, the Assyrians, many of them employed in the military under British command, rebelled against the new government, refused to accept its citizenship, and demanded to be given autonomy within Iraq.

The bloody crash of the insurgency led by the Iraqi army in 1933 led many Christians to leave Iraq. Wars, political disturbances and hardships since then have continued to drive Christians either to migrate or to become displaced inside Iraq.

While it remains imperative for the world to be concerned about the status of the Iraqi Christians, their plight should be understood within the context of the political instability the country has been going through since the US-led invasion a decade ago.

Like the rest of the Iraqis, the country’s Christians have fallen victim to the systematic destruction of the Iraqi state and society, which has unleashed an ethno-sectarian struggle over power and wealth and rekindled historical and religious rivalries.

In his elaborate speech to the Baghdad conference, Sako was right when he underlined the deteriorating security situation in the country and “the spread of a culture of majority and minority” as being key causes behind the Christians’ migration.

“Effective forces on the ground have surfaced to use this reality to promote divisions on a sectarian basis, and it seems that the regional and international powers are pushing hard to keep the situation miserable in the region,” he said.

Glory to God, the greatest miracle on earth has taken place! We…

Most viewed articles
Why Do We Call It Pascha?114
The Postmodern Truth of Resurrection77
Serbians in Kosovo Are Prevented from Celebrating Orthodox Feasts76
Archbishop of Australia: Christ Teaches Us to Go Ahead, to Dare, to Dream, to Have Courage, to Hope63
Serbian Patriarch Shares Paschal Meal with the Homeless43
What Is Paschal Joy?36
How to Preserve the Fruits of Fasting after Pascha?23
Most popular authors
Pravmir.com team119
Fr. James Guirguis114
Fr. Vasile Tudora77
Archbishop Makarios of Australia63
Priest Andrei Chizhenko36
Fr. Andrei Gavrilenko23