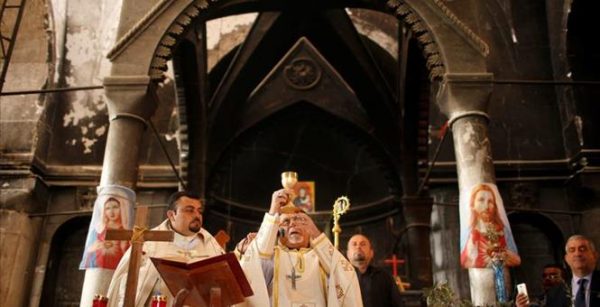 While the world looked on in horror as a pair of Coptic Christian churches were bombed by ISIS in Egypt, Christians elsewhere in the Middle East were experiencing a triumph over the terrorist organization. Iraqi Christians were able to celebrate their first Palm Sunday in three years. On Sunday, Christians were able to return to the Christian town of Qaraqosh and celebrate Mass and the start of Holy Week for the first time since ISIS took over the city in 2014. The area was liberated in October of 2016.

Reuters reports that “hundreds” of Christians returned to the town for Mass. The parishioners of Immaculate Conception Church were protected by armed soldiers and jeeps in order to safely worship. The church still has graffiti from when ISIS soldiers vandalized the building, and the inside was described as “burnt out.”

But on Sunday church bells rang again across the town.

Hundreds arrived in cars from Erbil, the main city in autonomous Iraqi Kurdistan where most Christian had fled when Islamic State gave them an ultimatum to pay special taxes, convert or die.

Islamic State has targeted minority communities in both Iraq and Syria, setting churches on fire.

Scribbled “Islamic State” slogans could be still seen on the church’s walls while torn-up prayer books littered the floor.

Escorted by soldiers carrying rifles, the congregation then walked through Qaraqosh for Palm Sunday, the start of Holy Week that culminates on Easter Sunday, holding up a banner saying “In times of war we bring peace.”