Source: Assyrian International News Agency
There were 30,000 Syriac Orthodox parishioners in Mosul in 2003, the patriarch said, of whom only 6,000 now remain.
Nohad Topalian | 24 June 2014
Beirut -- Baghdad native Ahmed Mahdi said he could not believe his ears when he heard that the "Islamic State in Iraq and the Levant" (ISIL) burned churches last week in Mosul. 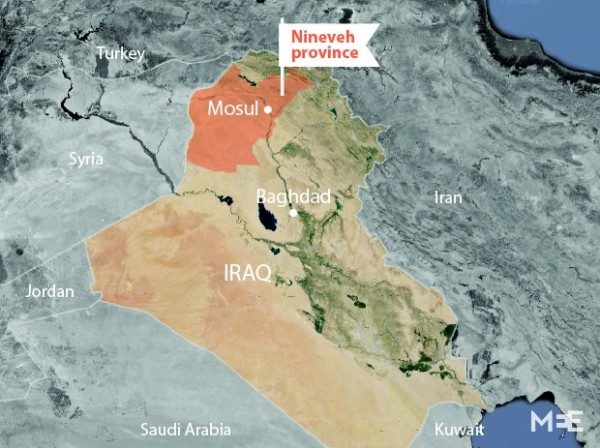 The city, whose history is a source of pride for him, represents religious co-existence to him, he told Al-Shorfa.

ISIL last week torched 11 Christian churches and monasteries and destroyed the historic grave of prophet Yunus (Jonah), the shrine of prophet Shayth (Seth) along with the statues of poets, writers and historical figures.

Mahdi, who has lived in Mazraat Yachouh in Lebanon for the past seven years, has been following the developments in Mosul.

“It is sinful what happened in Mosul and the suffering its people experienced,” he said.

“Mosul is an old Iraqi city that holds shrines for prophets and imams, churches and monasteries, and also is the hometown of military leaders and thinkers,” he said. “Today, it is under the rule of ISIL, an organisation that claims to be Islamic while it annihilates religion in the name of Islam.”

“They burned churches, destroyed shrines and obliterated a historic civilisation,” he added.

Muslim and Christians have long lived in Iraq as one family, Mahdi said.

“These terrorist gangs showed no respect for all religious shrines, wreaking havoc on Christian and Muslim sites alike and displacing our Christian brothers,” he added. “This is something we strongly oppose because Iraq can only rise with all its people of all sects.”

Iraqis of a variety of sects and religions residing in Lebanon found ISIL’s abuses against Christian and Muslim religious landmarks in Mosul to be unacceptable.

The burning of the churches and monasteries was a “disgraceful act by a terrorist organisation that does not know the meaning of religion and religious co-existence in a country of history and convergence of civilisations”, said Dalia Sabah, a Sunni from Iraq who has lived in Lebanon with her family for more than five years.

“I still cannot believe the heinous barbarism committed against our people and the shrines that we respect,” she told Al-Shorfa.

“Though we are ordinary citizens, we are concerned with everything that happens in Iraq,” she said. “We oppose these criminal abuses against Christians, as they are our brothers.”

“ISIL is a criminal organisation and must be stopped,” Sabah added.

“The situation is very sad,” said Ignatius Aphrem II, Patriarch of Antioch and All the East and Supreme Head of the Syriac Orthodox Church.

The patriarch visited Erbil and Dohuk last week to check on the condition of his parishioners who were displaced from the province and Mosul in particular.

“These people left everything behind and fled to safer places,” he said. “I met some who walked for more than 10 hours to be safe from what is going on.”

The patriarch condemned the actions of ISIL and “all who commit violence against any other human being”.

“We condemn all who attack and kill others, particularly those who target the innocent and peaceful members of any sect or faith and those who have nothing to do with what is taking place,” he said.

Syriac League in Lebanon head Habib Aphrem, who also serves as secretary general of the meeting of the Levantine Christian Front, condemned ISIL’s destruction of churches and Islamic and historic landmarks in Mosul and its “massacring of soldiers in cold blood”.

“We call for the broadest Arab, regional, Islamic and international alliance to combat the imminent danger of ISIL in all Middle Eastern countries, so that these countries do not turn into slaughterhouses for the weak and where nationalist, ethnic and religious minorities are abolished,” he told Al-Shorfa.

RENDING THE FABRIC OF IRAQI SOCIETY

What is taking place in Mosul, Ramadi and other areas does not merely target Iraqi Christians, but also the Iraqi state and political process as a whole, said Chaldo Ramzi, who is active in the Iraqi Assyrian Democratic Movement (ADM).

Describing the ISIL as a “terrorist group that poses a danger to Iraq as a whole”, Ramzi said the group seized ADM headquarters in Mosul and demolished monasteries and churches, including churches that were under construction.

“ISIL is abusing all defenceless innocents as part of the organisation’s systematic killing operations and is tightening the noose on Christians,” he said.

“All we want is for the spirit of citizenship and acceptance of others to prevail,” he said.

Most viewed articles
Hierarch from North Macedonia Gives Advice to the Ukrainian Orthodox Church90
Can God Break A Promise?82
Participating in God’s Vision73
Patriarch Kirill: Faith in the Lord Gives Us the Ability to Distinguish Between Good and Evil72
First Orthodox Prayer Book in Portuguese Published in Portugal71
Metropolitan Hilarion: Faith is the Foundation of the Religious Life43
Lessons from Saint Mary of Egypt32
Representative of Russian Patriarch Delivers Rehabilitation Facilities to Children in Syria28
Patriarch Kirill: We In No Way Question the Healing Power of the Holy Mysteries of Christ!27
Ethiopian Patriarch Thanks Patriarch Kirill For the Support During the Persecution17
Most popular authors
Pravmir.com team306
Fr. James Guirguis82
Priest Dustin Lyon74
Metropolitan Hilarion (Alfeyev)43
Justin Doty32