Is Not the Body Still Holy After Death?

I've heard some unenlightened reasons for opposing cremation, such as the idea that God won't be able to reassemble scattered ashes at the Resurrection. Such nonsense not only calls into question God's power, it offends the memories of those killed in accidental fires or the horrors of war.
| 09 November 2010 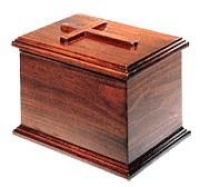 Anything goes in Amsterdam. A recent Economist article describes how Dutch mortuaries are pioneering a novel field in alternative energy, one that gives new meaning to the phrase “people power.” Since cremating corpses involves so much energy, crematory furnaces are being connected to municipal power grids lest any of this valuable resource go to waste. Some folks are literally dying to become cheap and renewable resources. There’s just one catch. Waste emissions from the process aren’t quite green enough for Dutch ecological sensibilities, so further research is needed to develop a truly “clean corpse” technology. This may seem an extreme scenario, but it’s not far from where we’ve come in accepting a practice once considered anathema.

I’ve heard some unenlightened reasons for opposing cremation, such as the idea that God won’t be able to reassemble scattered ashes at the Resurrection. Such nonsense not only calls into question God’s power, it offends the memories of those killed in accidental fires or the horrors of war.

Since the Catholic Church stopped forbidding cremation in 1963, the Orthodox Church (along with Orthodox Judaism) has increasingly had to explain its own opposition not only to the general public, but to its own faithful as well. The Orthodox insistence on burial is founded on respect for the human body as God’s handiwork. The biblical account of our creation in God’s image doesn’t apply only to our rational faculties, but also to our physical being. The goodness of the created world, and of the body, is proven when Christ becomes flesh to redeem it.

The notion of an incarnate deity was anathema to the pagan Greco-Romans (along with Gnostics and other “dualists” both ancient and modern), who believed all things material were inherently corrupt and illusory, and only the immaterial had any redeeming value. They practiced cremation as a means of liberating the good soul from the bad body. Cremation meant destroying the soul’s material prison, allowing it to escape.

Early Christians and Jews, on the other hand, venerated the bodies of the dead as still reflecting the sacredness of God. For those who celebrated the death, burial and resurrection of Christ, cremation became unthinkable. They treated their dead like Christ, anointing them with fragrant spices, wrapping them in burial shrouds and laying them in the earth. The places of the dead, catacombs became the gathering places for worship.

When they began suffering persecution, Christians carried away the bodies of their martyrs, kissing their bones and eventually making pilgrimages to their tombs. As church buildings appeared, martyrs’ shrines were incorporated into them by placing their bones in the altar tables, an Orthodox practice to this day.

Few things seem more macabre to the enlightened mind than kissing the bones of the dead. Conversely, few things would have seemed more anathema to early Christians than burning a body, crushing its bones and scattering the ashes or keeping them in a jar.

Cremation, outlawed as a pagan desecration by a fifth-century imperial edict, is becoming the preferred method of body “disposal” even among Christians. Although hardly deliberate, strands of the ancient dualism do permeate a modern death. I once had to inform a woman who already had her husband’s ashes in a box that I couldn’t bury him. She didn’t think a funeral was necessary anyway, since he was already partying in heaven. His soul was the “he,” while his body was now insignificant.

As a seminary instructor of mine once quipped, “We live like hedonists and die like Platonists.” We live as though our body is the essence of our being, but suddenly it becomes nothing when we die. It’s not my intent to offend those who’ve had loved ones cremated, but to provoke thoughtful consideration of how we want to be treated when we die. Every method implies a belief about the meaning of the body, either that it is a divine icon or simply an empty shell.

Metropolitan Mark of Ryazan and Mikhailovsk, Chairman of the board of the Foundation for Building Churches in Moscow,…