Is There a Difference Between Dating Someone From Church vs. Someone At School?

He Said by George Matook

Is there any difference between going out with an Orthodox girl and a non- Orthodox girl? Absolutely. There is a significant advantage to having a relationship with an Orthodox girl. For one thing, you believe in the same things as she does. Of course, this is a definite “in” with her family. “Oh, he’s that nice boy from St. George’s?” But seriously, beliefs, in both the spiritual and moral sense, should be the foundation of any relationship that is worth a piece of Syrian bread. In essence, especially with a union between two Orthodox teens, the relationship is built upon this common ground.

There is also a great danger in dating a non-Orthodox girl. What if she doesn’t have the same morals as you? What if she thinks sex before marriage is OK? Hopefully, you follow the teachings of the Church regarding these issues, but how strong is your moral fiber? Your belief in Orthodox values would most likely be put to the test in a relationship with a non-Orthodox girl. How long could you possibly resist the temptations present without support from the other side of the relationship? It would certainly be a challenge to say the least. And in order to discover how the girl feels about these kinds of things, a potentially awkward conversation would have to ensue. This discussion could be very embarrassing for both parties, especially the Orthodox boy. After all, it is always the boy (stereotypically of course) who wants “to get to know” the girl better, if you catch my drift. Now it is the boy who must say “no.” This could prove to be a great test of his faith and moral character, and a dangerous test at that.

All in all, there can be some major differences between dating a non-Orthodox girl versus an Orthodox girl. Most of these differences are based on disagreeing ideologies. However, if one were so lucky as to date a non-Orthodox girl who has the same morality, there would probably be little or no problem. Yes, we are teenage boys in America and subject to all the facts and myths that go with this situation, but we must be strong and most importantly of all, be Orthodox. 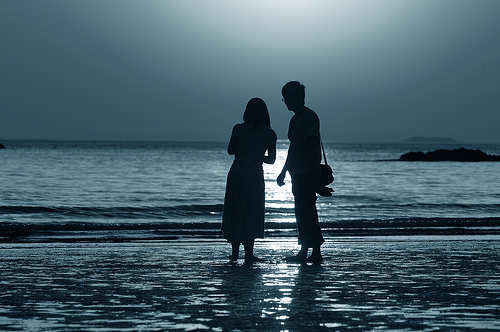 She Said by Mary Pier

There is definitely a difference between dating someone Orthodox and someone from school! First of all, when we distinguish between the two, we must assume that this Orthodox boy is someone that we would meet through our church, SOYO, or the Antiochian Village. We also must assume that this boy upholds Orthodox Christian values and morals. The other category would include people that we know from school, work, or from an extracurricular activity and who are not Orthodox. I’ve dated people from both sides and there is no question that these people are different from each other. But how different are they?

Orthodox and non-Orthodox guys, although different in some respects, are still very much the same. Both are able to make you smile and laugh. Unfortunately, they are both able to make you cry and to hurt you. You can be attracted to them, in love with them, not get along with them at all. We are all attracted to a certain type of person; we can’t help that. When we consider dating someone, personality and physical appearance make up the majority of our decision. Thus, we can be attracted and like both Orthodox and non-Orthodox boys.

On the surface there seems to be no difference at all. However, just as we can feel more connected and in tune with our Orthodox friends than our school friends, we can feel more connected to our Orthodox boyfriends. The spiritual bond of Orthodoxy is built through common experiences of sharing a faith and upholding the same religious values in the world. Also, when we compare and contrast both Orthodox and non-Orthodox boys, the quality of “Orthodoxy” can make a world of difference. As I said before, a guy who is Orthodox is someone with similar moral values as you. Because of this, they are more likely to be kind, respectful, and have the same expectations and values concerning relationships as you. As a consequence, these “Orthodox” guys seem to be more of the type of guy that we would want to date and bring home to our parents.

However, there are a few catches. It is very possible to find someone who is kind, respectful, and who shares similar moral values, but is not Orthodox. There are many non-Orthodox boys out there whom you would definitely want to date and bring home to mom and dad. In addition, there are healthy relationships and there are inappropriate ones, regardless of whether the boy you are dating is Orthodox or not. There is a time and place for everything. Sometimes, we can get too engrossed in a relationship and forget other important things like God, our families, and friends. Right now, it may be better to just build friendships instead of serious relationships. Cause girls, you know that when we fall, we fall hard. By the sixth month at least, we have the wedding planned, the kids named, and the Godparents picked out. Situations change, and so do people. In reality, none of us is prepared to make a long-term commitment at this stage of the game.

In closing, no relationship is perfect. Dating someone Orthodox doesn’t guarantee happiness or a diamond ring, just as planning a picnic doesn’t guarantee fair weather and no ants. The best advice that anyone could give concerning dating is to “Let go, and trust God.” God has a plan for us, and we need to listen to Him. We’ll find our Prince Charming who will sweep us off our feet up onto his white horse and off into the sunset. (And for the Arabs out there, you’ll find your Prince Aladdin and he’ll sweep you off your feet up onto his magic carpet and off into the sunset.)