Is War Ever Justified?

What we see in all this that Christ when He introduced in our world – a world where there is killing and death – a new reality: the new divine life which liberates us from fear, He did not order us out of the world, but send us into the world, so that we may transform it from inside. Being and living in the world implies involvement, not withdrawal; responsibility, not escape.
| 10 May 2009 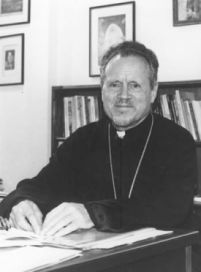 The Gospel tells us that we live in a world which is not the world as God wanted it. Our world is, at least partially, controlled by the “prince of this world’ (John 12:31), who was “a murderer from the beginning.” (John 8:44) Murder, killing, war, death are the intrinsic parts of the world’s very existence. Somehow, man was always able to understand the tragedy of killing, for he experienced fear for himself, for his loved ones, but he was never able to stop wars, murders, and other forms of killing. The Gospel explains why this is so: Behind the world’s tragedy, there is an evil Planner – the “murderer” from the beginning – Jesus Christ first unmasked him, called him by his true name – “the Murderer” – and then stripped him from his power by first submitting Himself to death freely, and then rising from the dead and giving us freedom from death.

The Christian’s responsibility consists, therefore, in acting with Christ and in Christ by giving life to other men, to the world itself. How can he then be involved in killing? Throughout the centuries, the Church—its Saints, its councils, its best members—has solved this problem in diverse ways, which excludes a single universal formula.

One the one hand, the Church has always unequivocally considered killing as an evil. St.Basil the Great (+379) prescribed a period of repentance, with several years’ abstention from Holy Communion, to all soldiers who participated in war. There are other cases, however, when divine blessing was given to other saints before wars and battles: to St. Constantine before his battle with the pagan Emperor Licinius; to St. Alexander Nevsky when he struggled with Western Crusaders, St. Sergius blessed Dimitry Donsko before his decisive confrontation with the Tartars and even sent two of his monks to participate in the fighting. These examples do not prove that killing is good. The Saints did not encourage killing, but sacrifice; they blessed men to give their lives, not to take the lives of others; for they also, all of them, rejoiced in peace not in war. His idea of blessed sacrifice is actually found in the words of Christ Himself. “Greater love has no man than this, that a man lay down his life for his friends.” (John 16:13)

What we see in all this that Christ when He introduced in our world – a world where there is killing and death – a new reality: the new divine life which liberates us from fear, He did not order us out of the world, but send us into the world, so that we may transform it from inside. Being and living in the world implies involvement, not withdrawal; responsibility, not escape.

Where there is war – especially modern war – who are the participants? The military alone? Surely not, but also all those involved in supplying the Armies and, therefore, every taxpayer.

A truly consistent “pacifist” attitude implies refusal to pay taxes and a total withdrawal from society. But is this the best way of making society better, and of “loving one’s brothers?” ltimately the real difference between a soldier on the front line and the taxpayer in the rear is that the first “lays down his life for his brothers,” while the second doesn’t. But both are, in act, involved in war.

The real problem it seems to me, is to stop wars rather than to practice individual “conscientious objection,” which is a quick deceptive way of keeping oneself “uninvolved in killing.” The Christian does indeed have the duty to struggle against war, as a means of solving conflicts, and especially against the madness of national power seeking.

But what about legitimate defense? Should Poland in 1939, have practiced non-violence when Hitler attacked it? Was it better for England, France, and America to let Hitler kill Poles, Jews, Rumanians, and Greeks, without interfering militarily?

Obviously, the problem of “wars of aggression” and “defensive wars” is not a problem of good and evil as such, but of greater or lesser evil. If Christianity has never condoned absolute pacifism, it is only because it knew that absolute good, absolute love and blessedness are not of this world. The Christian has a foretaste of them. He tries to introduce as much of them as he can in his own life, and in the life of society, but – as long as he lives in this world – he is forced to think in terms of “lesser evil,” not of “absolute good.” This is the foundation of a justified self-defense.

But never did the Church condemn responsible and selective “conscientious objection,” especially when it includes a meaningful service to society, and is not understood as selfrighteous escape; but as a witness for truth and justice. The state alone cannot be given the absolute and infallible right to judge which wars are just!

Killing in any form is evil, even if somehow coupled with personal risk and sacrifice. It may be lesser evil than self-righteous withdrawal from responsibility, for the latter can lead to even more killing – by others – of innocent brothers and sisters of ours.