ISIS Is Using Ancient Churches As Slaughterhouses And Torture Chambers 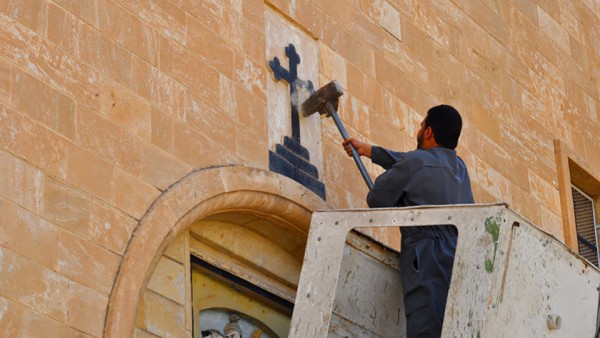 The Washington-based advocacy organization International Christian Concern is reporting that Islamic State militants used several historic churches in Mosul as stations for animal sacrifice during a recent Islamic festival. One of those churches was the famous St. Ephrem Syriac Orthodox Church, which ISIS took over in June and reopened as a “mosque of the mujahideen.”

Mosul was once Iraq’s center of Christian influence, but after the Islamic State took over in June, most Christians have either fled or been killed by terrorist forces. A priest formerly based out of Mosul has also reported that ISIS militants have used churches in Qaraqosh, another formerly majority-Christian city in Iraq, as torture chambers, while a monastery north of Mosul has become a women’s prison in ISIS hands.

“Most inside are Christians and they are being forced to convert to Islam,” Abu Aasi said. “ISIS have been breaking all the crosses and statues of Mary.”

ISIS has systematically destroyed Christian and Jewish relics in Iraq and Syria. Most recently, the terrorist organization blew up the ancient Arch of Triumph monument in Palmyra. ISIS forces have also destroyed Christian statues and paintings throughout the region.