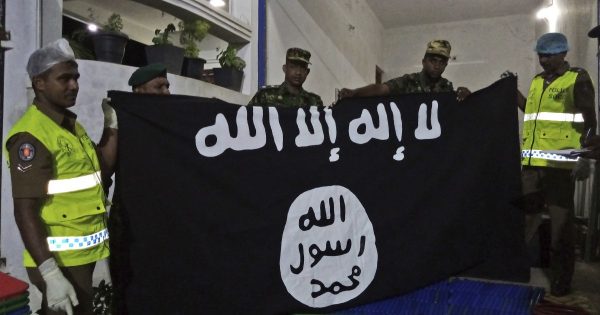 The Islamic State will target Christians as part of the terrorist group’s offensive during the upcoming Islamic holy month of Ramadan, a new report predicts.

ISIS operatives killed more than 250 people in a coordinated Easter Sunday attack on churches and hotels in Sri Lanka on April 21. A report published by the Institute for the Study of War says those suicide bombings were this year’s opening salvo in the jihadists’ annual Ramadan terror campaign.

At least two attacks that could be attributable to ISIS were thwarted in Russia in late April, according to the report.

“These attacks are consistent with ISIS’s longstanding campaign to inflict losses on civilian populations, instill fear, and otherwise destabilize countries outside the bounds of its Caliphate,” the researchers said. “ISIS intends to provoke backlash against vulnerable populations of Muslims to divide society, fuel radicalization, and enable recruitment.”

ISIS has targeted Westerners in its annual Ramadan campaigns since 2014.

Blaise Misztal, a fellow at the Hudson Institute, concurred that ISIS is likely to target Christians, given “their history of and desire for striking targets meant to send a message to the West.”

“But it is also unlikely that this is the sole or even primary focus of ISIS’s strategy,” said Misztal. “Instead, as its territorial control in Iraq and Syria has dwindled, ISIS is invested in a campaign of rebuilding both its brand and its reach.”

A recent increase in ISIS activity bolsters Misztal’s point. Besides the Sri Lanka bombings, the group conducted smaller strikes in Saudi Arabia and Bangladesh. ISIS also established a new wilayat, or province, in the Democratic Republic of the Congo on April 18 and followed it up with multiple attacks there.

Perhaps the most notable event, though, after the Sri Lanka massacre is the release of a video purporting to show ISIS leader Abu Bakr al-Baghdadi. It marks the first time the terrorist leader has been seen in public since he declared himself caliph in 2014 from the pulpit of the Great Mosque of al-Nuri in Mosul, Iraq.

The video’s release comes at a crucial turning point for ISIS, as the group continues its transition from a land caliphate in Iraq and Syria to an international terror network capable of striking targets across the globe.

“Our battle is a battle of attrition, and we will prolong it for the enemy, and they must know that the jihad will continue until Judgment Day,” Baghdadi said in the video.

The terrorist leader praised the attacks in Sri Lanka and Saudi Arabia and accepted pledges of loyalty from terrorists in Burkina Faso and Mali. The ISW researchers believe this is a clear sign ISIS is shifting its focus to Africa. The United States and its partner forces appear to have taken notice, conducting airstrikes against ISIS forces in Somalia on Saturday. It was the second airstrike against ISIS-Somalia last month.

ISIS has engaged in annual Ramadan offensives since 2012. The campaigns tend to be widespread, but in some cases the terrorists have targeted specific groups, including Shiites, Kurds, and Christians, with the intention of spurring division.

In 2012, Baghdadi announced the “Breaking the Walls” campaign in Iraq, meant to weaken the already fragile country. It eventually prompted the government to violently suppress a Sunni protest movement. The next year, the group began intimidating Sunnis itself in what it called “Soldier’s Harvest,” setting the stage for a takeover in Iraq. In 2014, Baghdadi declared the creation of the caliphate, and a shooting at the Jewish Museum of Belgium showed the group’s ability to strike abroad. Syrian Kurds were targeted in 2015 in an attempt to demoralize the U.S.-led coalition against ISIS.

The next year saw 49 people murdered by a gunman at the Pulse gay nightclub in Orlando, Fla., the deadliest terrorist attack in America since Sept. 11, 2001. In 2017, the group struck Iran in what ISW called punishment for anti-ISIS operations. The terrorists also staged two assaults in England that year. Almost two dozen people died in a suicide bombing of an Ariana Grande concert in Manchester, and eight people were murdered in an attack on London Bridge. ISIS targeted Christians in Indonesia in 2018 in an apparent attempt to drive anti-Muslim sentiment in the West and showcase the group’s reach beyond the Middle East.