Source: National Catholic Register
President Reuven Rivlin’s April 14 meeting there with Christian leaders, including Latin Patriarch Fouad Twal, marked the first time in more than 30 years that an Israeli president has visited the patriarchate.
Michele Chabin | 17 April 2015
JERUSALEM — Israeli President Reuven Rivlin made a rare visit to a Christian site Tuesday to meet with the heads of the Christian churches in the Holy Land at the Greek Orthodox Patriarchate of Jerusalem. The visit was in honor of the Christian celebration of Easter. 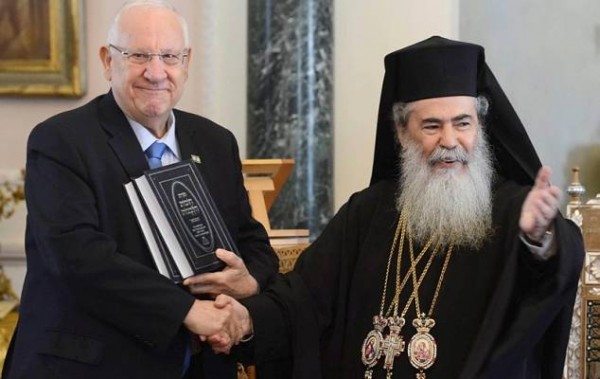 Jason Pearlman, Rivlin’s foreign media adviser, said the president’s decision to travel to the patriarchate, located in the Old City of Jerusalem in the eastern part of the city, reflects the president’s ”agenda to reach out and build dialogue” with Israel’s diverse religious and ethnic communities.

By all accounts, Rivlin, who is Jewish, has made outreach to Israel’s many minorities a priority. The first official visit he made upon taking office in July 2014 was to an Arab municipality. Arabs comprise about 20% of Israel’s population, and most of Israel’s Christians consider themselves part of the Arab community.

The same groups of vandals are believed to have carried out numerous attacks against Muslim-owned and Arab-owned property in revenge for the Israeli government’s unwillingness to build new Jewish settlements and limit building within existing settlements.

Both Christian and Muslim leaders have accused the Israeli government of not doing nearly enough to prevent the attacks or punish the perpetrators.

He said that “religious freedom is a value dear to the state of Israel as a Jewish and Democratic state. I am proud of our obligation, and I reaffirm that obligation to freedom of worship for all denominations and communities. We shall not allow hate crimes against people or buildings of faith.”

Israel’s law-enforcement officials “must deal with such crimes accordingly,” he said, clearly intimating that they are not doing enough to stem the attacks.

The president said the people of the region live in a “complex political and religious reality,” especially in Jerusalem, which he called “the microcosm” of the Middle East.

Rivlin said that communications between the churches and the Israeli government are vital, especially during these tense times in the region.

“It is our shared duty to have proper and respectful communication between us. For many years, our relations have been kept through the [religious] status quo,” he said, referring to an 18th-century Ottoman decree that codified which holy sites belong to which religious groups and denominations. It is largely based on agreements between the various faiths not to alter the sites or claims to the sites in order to keep the peace.

The president called the status quo decree “not only a formal obligation but an expression of understanding … of the delicate balance of living in a diverse community. I believe that, despite the differences and challenges, we can all establish trust, partnership and mutual respect as people of faith.”

Despite the Israeli government’s attempts to accommodate the needs of different faiths, Catholic leaders have long been at odds with the government over the issue of church property taxation and the government’s reluctance to issue visas to Christian clergy and seminarians, especially from Arab countries.

Following the president’s address, Archbishop Fouad Twal, the Latin patriarch of Jerusalem, said, “We pray that, during your term in office, peace will be implemented between peoples, based on justice, dignity and security.”

Patriarch Twal noted the “great threat” facing Christian communities in the Middle East and said there is “an embarrassed silence” about Christians “being crucified, beheaded, stoned and shot in country after country.

“We must lament the slaughter of Christians in the presence of the indifference of world leaders. We hope and pray that God will impart peace on our peoples in the Middle East and across the world,” the patriarch said.

Greek Orthodox Patriarch Theophilos III told Rivlin the leaders were “grateful for his visit during this season when the Christian community is celebrating the festival of Pascha (Easter). The close relationship between Passover (Pesach) and Easter (Pascha) is an important reminder to us all, of the deep bonds that unite the children of Abraham. Jews, Christians and Muslims have lived here side by side for centuries.”

“In the turbulent current situation in the Middle East,” Patriarch Theophilos said, “we know there is no better alternative than to live together in genuine harmony. We wish to acknowledge and commend you, Mr. President, for the strong stance you have taken against religious bigotry of any kind and for the actions you have taken against crimes targeting religious shrines, monuments and holy places.”

In an interview with the Register following the event, Auxiliary Bishop William Shomali of the Latin Patriarchate said the Israeli president’s visit had two dimensions: one political and the other religious.

“The religious one is to make the Christian leaders feel that Israel is aware of their importance and needs,” he said. “The other one is to assert Israeli authority over the Old City of Jerusalem,” located in East Jerusalem, which Israel annexed following the 1967 Middle East War.

The Palestinians, which are both Christian and Muslim, claim East Jerusalem as the capital of a future Palestinian state. The Israeli government has vowed to never relinquish the Old City, where the Western Wall, Temple Mount, Al Aqsa Mosque and Church of the Holy Sepulcher are located.

“As leaders, we looked only at the religious aspect and did not pay attention to the political one,” Bishop Shomali said. “We leave that to politicians.”

Most viewed articles
Into the Heart of the Capitol207
Admitting That We Hate111
Funeral for Metropolitan Philaret Held in Minsk80
Patriarch Kirill Speaks on the Role of the Deceased Metropolitan Philaret in the Revival of Church Life in Belarus62
Homily on the Circumcision of Our Lord Jesus Christ40
“Bus of Mercy” Helps Homeless in Magnitogorsk38
Number of Christians Murdered for Faith Rose 60 Percent in 2020: 50 Most Dangerous Countries to Be a Christian30
Building a Fire and Preparing for Theophany24
Churches to Reopen in Greece on January 189
God Is With Us… And Nothing Else Matters1
Most popular authors
Archpriest Stephen Freeman207
Pravmir.com team188
Archpriest Michael Gillis111
Protopresbyter George D. Konstantopoulos40
Charlene Aaron30
Fr Gregory Scratch24
Maria Trushanina1
Fr. Gabriel Bilas1