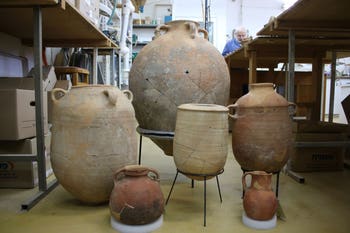 Archaeologists from the Israeli Antiquities Authority believe they have found remnants of an earthquake that hit Jerusalem, the ancient capital of the kingdom of Judah 2,800 years ago.

The earthquake is mentioned in the books of Zechariah and Amos.

Amos 1:1 says: “The words of Amos, who was among the herdmen of Tekoa, which he saw concerning Israel in the days of Uzziah king of Judah, and in the days of Jeroboam the son of Joash king of Israel, two years before the earthquake.”

In a social media post, the Israeli Antiquities Authority (IAA) said they had found the evidence during an excavation in the City of David National Park. The excavations revealed “a row of shattered vessels, bowls, lamps, cooking utensils, smashed storage, and storage jars,” from when a building’s wall had collapsed. They also said that no sign of fire or a deliberate collapse of the building was found.

Excavation directors Dr Joe Uziel and Ortal Kalaf also confirmed the earthquake had occurred in the middle of the 8th century BC and “was probably one of the strongest and most damaging earthquakes in ancient times. Evidence of its occurrence has been discovered in past excavations conducted at a variety of sites throughout Israel.”

The final findings of the excavations will be presented in September at an archaeological conference hosted by Megalim Institute.

Most viewed articles
Seven Lessons for the New Year from St. Seraphim of Sarov237
A Great Time to Join the Orthodox Church171
New Jersey Governor Signs Bill Legalizing Abortion Up To Moment of Birth105
The Way of Christ Is The Way of Love71
Metropolitan Hilarion Celebrates the 20th Anniversary of His Episcopal Consecration57
Brooklyn Street Co-Named for Antiochian Pastor Who Served a Half Century There43
Metropolitan Hilarion: the Church and traditional confessions have done everything possible to improve the situation in Kazakhstan39
4-400×6001
Sunday of the Samaritan Woman1
How We Worship: the Struggle of the American Experience1
Most popular authors
Priest Luke A. Veronis237
Frederica Matthewes-Green171
Ryan Foley105
Pravmir.com team96
Fr. Theodore Stylianopoulos71
Peter Samore43