Israeli priest to testify at UN on Muslim oppression 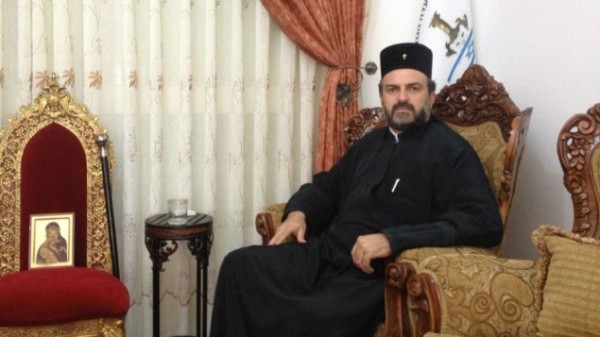 Father Gabriel Naddaf, in his living room, alongside a likeness of Mary, which, he believes saved his life in a road accident in 2011 (photo credit: Mitch Ginsburg/ Times of Israel)

A Greek Orthodox priest from Israel who supports enlistment into the IDF is set to tell the United Nations Human Rights Council about the plight of Christian minorities who are being oppressed by Muslim extremists.

Israeli-Arab Father Gabriel Naddaf, who is the head of the Greek Orthodox Church in Yafia near Nazareth, is scheduled to give his testimony to the 47 member nations of the council during a special debate on racism on Tuesday.

Naddaf’s appearance was announced by UN Watch, an Israel-linked group that monitors the multinational body for compliance to the UN charter.

The NGO said on Monday that a Christian is killed every five minutes for his or her faith.

Naddaf has become a controversial figure in Israel since joining the Forum for Drafting the Christian Community in October 2012 and for openly calling on Israel Christians to serve in the IDF. His activities have drawn criticism from Arab MKs and the threats against his family.

In December 2013 his son was assaulted and hospitalized because his father’s views.

Naddaf was asked by the forum to serve as a spiritual guide, along with two other clerics. But the other two dropped out following a campaign of intimidation, leaving Naddaf alone at the helm.