I find it difficult to imagine an Orthodox believer who writes directly to a mufti, disputes with him, and criticizes Islam the way Muslims are writing me to say that Orthodoxy is "a false religion." They cite Koran as saying that all unfaithful should be killed. I find it interesting because it is live contact. Such polemics can help us give a fresh critical look at some questions of Christian-Islamic dialogue in order to form more reasoned and clear position in the future.
Olga Kiryanova | 05 November 2009 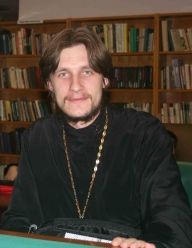 Christ called upon fishers, future apostles, to leave their nets, follow him and become “fishers of man”. Archpriest Viktor Gorbach, head of the Missionary Department of the Yuzhno-Sakhalinsk Diocese, is no fisher, but he is also close to the ocean and tries to answer this appeal his own way, but also using the nets, social ones. People from various parts of the world write to him, he answers the users and moderate different thematic groups.

Whether this mission of “fisher of man” is effective, what kind of people turn to him and what they write, Fr. Viktor told the Interfax-Religion correspondent Olga Kiryanova.

– You intensively communicate with young people in major social networks. Can we call it an Orthodox mission?

– Yes, I have a page at Odnoklassniki (Russian analogue for Classmates.com – IF) and V Konakte (In contact). There are communities we organized together with young people. I can’t evaluate this work, but I think it is very promising work for clerics as the majority of youth spends a lot of free time in the social nets. Today people are dissociated and Internet is the main source of communication. For this reason, Church representation is urgent here. Such work is characterized by informal communication aimed at real needs and demands of the society.

– What kind of people turns to you?

– Mission in social networks covers different people. Our geography is very extensive – people write to me from Sakhalin and Far East as well as from Central Russia, the Netherlands, the USA and Australia.

As a priest, I belong to several thematic groups. For example, at Odnoklassniki about seven-eight people a week ask me questions concerning them, which they’re afraid to ask the parochial priest or even discuss with their relatives.

A girl complained to me about moral qualities of young men. She was concerned that most young men are socially passive, they don’t have purpose in life, and some of them constantly drink and treat opposite s ex like consumers. The girl’s main problem is inability to set up a family.

Young men say that girls have high financial demands and lack feminity. Certainly, these problems are very difficult, but even few kind words can help a person to give fresh look at the most difficult situation and find the way out.

By the way, there’s a great number of pseudo-Orthodox sects, various healers and charlatans at social websites. They claim they’re priests or even elders. It proves that social networks trust in Orthodox Church and priests. It is rather difficult for an ordinary person to understand where a real priest is and who is a fraud. Thus, priests need to take part in them.

– Do followers of other religions turn to you?

– Yes, Muslims also address me. What is really interesting is that they usually question me about Islam teaching and oppose it to Orthodox dogmas. So people want direct interreligious polemics. It makes me respect them. I find it difficult to imagine an Orthodox believer who writes directly to a mufti, disputes with him, and criticizes Islam the way Muslims are writing me to say that Orthodoxy is “a false religion.” They cite Koran as saying that all unfaithful should be killed. I find it interesting because it is live contact. Such polemics can help us give a fresh critical look at some questions of Christian-Islamic dialogue in order to form more reasoned and clear position in the future.

– Do you think that missionary work in social networks can indeed bring a person to the Church?

– I think, yes. The most important task is to destroy certain negative stereotype of the Church that a concrete person may have and then he will make his deliberate choice. I remember very well how a priest came to Sakhalin fourteen years ago. I was almost a boy then and but when he was talking to me, he called me “brother.” He said it informally, very sincerely, and it sank into my heart. I wasn’t a practicing Christian, but I sympathized with Christianity. I still warmly recall this priest. Perhaps, his sincere address helped me come to the Church afterwards.

It’s difficult to evaluate the efficiency of Orthodox mission. God leads a person to the Church. It’s very difficult to find criteria for saying: this thing helps come to the Church and that one doesn’t. Some people sow and some come to reap. Every kind word we say and every good thing we do will give its fruit.

We have to work and remember that we work for God and not to some certain “effective” programs. Any such program stumbles over human factor. Certain technologies can help to lead a person to a certain structure, but only love leads to the Church. When a person sees this love and understands that it is not a pragmatic interest, but he is interesting and important to you because you are a Christian, it stands high. Sincere care of his Orthodox friend can help person make a choice and come to Christ. It may happen in five or ten years, but from my personal experience I can say that it won’t take long. Missionary work is more effective when it is custom made. Preaching at the stadiums is also important as such format covers larger audience, but personal contact is more important. It is indispensable. I am sure that social networks give a very serious resource that is vital for the Church to use.