Jeremić and Pozderac accepted the honor on behalf of their relatives who helped Jews in the Balkans during World War II.

The medal, bestowing the honorary title “Righteous Among the Nations” on non-Jews who risked their lives to save Jews from certain death during the Holocaust, was posthumously awarded to Nurija and Devleta Pozderac – Jeremić’s great-grandparents on the maternal side – and to Vojislav Knežević for saving a number of Jews during World War II.

Knežević, from the northern Serbian town of Kikinda, managed to help his Jewish wife, her sister and the sister’s four children get out of the Sajmište concentration camp that was run by German Nazis on the outskirts of Belgrade, while Nurija and Devleta Pozderac from Cazin, northwestern Bosnia, saved the lives of a Jewish doctor, his wife and one other Jew.

The bravery of those, who risked their lives and lives of their families to help people that were transported to death like cattle, was the victory of humanity over fear and indifference, said Israeli Ambassador to Serbia Yossef Levy while presenting their descendants with the recognitions at at a ceremony in Belgrade. 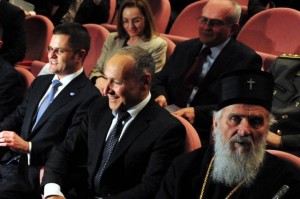 Receiving the special medal from the hands of the Israeli ambassador, Jeremić – Serbia’s former foreign minister and currently president of the UN General Assembly – said that he is immensely proud of his ancestors who stood up against the crimes committed against Jews and Serbs during the war.

“My immense excitement at receiving this recognition stems from a deep feeling of mine that this old family story is not alive in me just because it affirms the universal principles of humanity, but also because it makes my own understanding of today’s world events historically alive,” Jeremić said.

This is the feeling of danger that we have always been exposed to because of mutual misunderstanding, Jeremić added.

Noting that he personally did nothing to deserve the award since he was not even born at the time, Jeremić said that the Israelis’ not letting the deed fall into oblivion but entering it into history even though 72 years have passed since is a message that the meaning of life in the former Yugoslavia should not be sought only in remembering the evil suffered, but also in remembering good deeds.

This trans-generational Balkan experience unerringly testifies to the fact that a victory of cooperation, empathy and solidarity among nations over infliction of suffering and evil upon one another always leads to years of prosperity for all who inhabit this part of the Balkans, Jeremić said.

“On the other hand, whenever a lack of understanding or an idea that good can be secured for one’s people at the expense of others prevailed, the whole region, without exception, would slip into regression, poverty and loss of state independence,” he stated, and added:

“As a result of everything that has happened to us, today none of the nations here seem to be satisfied about their situation, and we can hear almost everyone blaming their neighbor for the evil that they are experiencing.”

He warned that certain powerful circles are working to ensure for the Balkans no other future than fragmentation of national and state territories, noting that the region is full of unstable societies facing cultural regression and the risk of returning to poverty.

Unfortunately, the majority of the Balkan elites are unaware or cannot understand the risk, said Jeremić. All too often we see this lack of awareness even here in Serbia, especially with those that believe that to dismember the country in this way is to lay a foundation for the betterment of all, calling it acceptance of reality.

Caught between the grim reality and a risky dream of the ideal, the Balkan nations are now turning to the future, and this future will be marked by the biggest changes on the world scene in the last seven decades, said Jeremić.

Anyone who does not see them coming will pay a price of their shortsightedness, and anyone who takes a step too early, will pay a price for their impatience, warned Jeremić, adding that only those will not go wrong who are self-confident and assertive enough to demand justice for themselves but at the same time sufficiently broad in spirit to demand it for others as well.

The Righteous medal is awarded to deserving individuals by Israeli Yad Vashem – Holocaust Martyrs’ and Heroes’ Remembrance Authority. Yad Vashem has awarded more than 140 Serbian men and women with a special medal for their unique deeds.