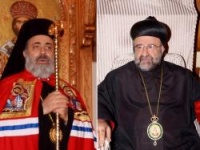 Next Tuesday, 21 May, Christians in Amman, Jordan, will hold a silent candlelit procession to demand the release of the two bishops of Aleppo, Mar Gregorios Yohanna Ibrahim and Boulos al-Yazigi in the hands of unknown kidnappers for a month.

Archbishop Maroun Laham, Patriarchal Vicar for Jordan of the Latin Patriarchate of Jerusalem said: “all the Christian churches will take part. We will leave from the Orthodox Cathedral of Amman to reach the Syriac Church, passing by the Latin Rite Catholic Cathedral.

“In this way the Christians of Amman and Jordan can join in the prayer that rises from all Christians in the Arab world, so our brother bishops and all the other victims of kidnapping are soon released.”

The silent march is being convened by the Assembly of the Heads of Churches in Jordan. In January 2009, a similar march was organized in Amman to demand an end to the military campaign ‘Cast Lead’ waged by the Israeli army in the Gaza Strip.