Keeping faith in the city

The majority of Hongkongers celebrate Christmas on December 25. However, a handful will set aside January 7 as their holy day – that’s the day the Russian Orthodox Church observes Christmas Day and many non-Russian Hongkongers have embraced the faith. 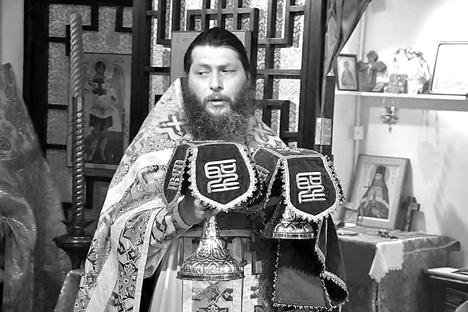 Christmas for Orthodox churches refers to the same holiday as the Catholic Christmas, but is based on the Julian calendar, introduced by Julius Caesar in 45BC, instead of the Gregorian calendar.

“Jesus Christ was born to sacrifice himself for mankind. So his resurrection is an ultimate proof of Jesus’ mission being accomplished,” he says.

The Russian Orthodox Church in Hong Kong has been steadily growing in recent years, with 25 per cent of its members being non-Russians and admits it focuses more on its Chinese followers.

Father Denis says there is a common ground between the Orthodox religion and Chinese culture, especially in moral and ethical values.

They translate the Bible and books about the Orthodox religion and do their services in multiple languages, including Russian, English and Chinese. The number of Orthodox Christians in China is estimated to be about 15,000.

Ambrose Lam, a Chinese Orthodox Christian who came from the mainland, says the early stage of his spiritual journey was not easy.

“Not many people understand the Orthodox religion, so my parents and friends were concerned at the beginning,” he says.

“One of the White Russian emigrants in Hong Kong was the first Russian Orthodox priest, named Dimitry Uspensky,” Pozdnyaeva Kira, also of Saints Peter and Paul Orthodox Church, says. “After 1917, he was sent to China and, in 1934, he was appointed as chief priest of the Hong Kong Russian Orthodox community that comprised about 300 to 400 people.

“He stayed in Hong Kong during the hard years of the second world war and passed through all difficulties shoulder to shoulder with locals.”

The life of Father Dimitry, who passed away in 1970, typifies the history of Russian immigration history to Hong Kong. There are 105 Russian Orthodox graves inside the Hong Kong Cemetery, and each of them has its own story to tell.

Historian Jason Wordie says: “The first wave of Russian emigration to Hong Kong could be traced to the 1920s, followed by the second wave in the 1940s. Driven by the October revolution in 1917, some of these emigrants sought refugee status and paved their way to the United States and Australia.

“In fact, there was a refugee category called the White Chinese, which referred to Russians. It also [in the very broadest sense] included those Chinese who did not agree with the communists and left China. White Chinese, in that respect, can be seen as a play on White Russian as opposed to Red Chinese and Red Russians.”

“The church first of all takes care of persons, not groups of people, and our mission is to bring the spirit of compassion, love and sense of being to anyone who searches for it in their contemporary, complex and fragmented life.”

Source: Russia beyond the Headlines