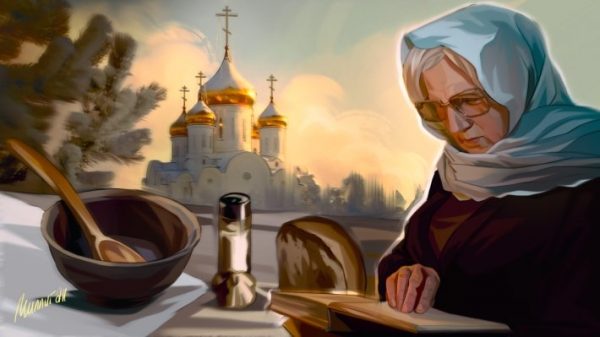 I’ve been reading the letters of Sts. Barsanuphius and John, written in the early sixth century in the region of Gaza.  One thing that has struck me as I am reading these letters is the pastoral compassion and just plain common sense these two holy men advocate in their correspondence.  These letters are written by and to monks living in extreme conditions.  Some are hermits, Barsanuphius has sealed himself into a room that he never leaves so that his prayer is undisturbed.  All are living an extremely ascetic life, living on as little food and sleep as possible in order to discipline the outer man and attend to the inner man.

However, despite this harsh lifestyle, one finds amazing condescension to human weakness in these letters.  One term often used in the letters is ‘measure.’  That is, each person has a measure and must come to know what that measure is.  The measure can grow, but it is nothing but pride to assume one’s measure is greater than it is.  So, for example, one might have a certain measure of sleep or prayer or work.  One’s measure in these areas refers to the amount of sleep or prayer or work one needs or can endure without becoming sick.  There are for Sts. Barsanuphius and John no hard and fast rules—except the rule to draw near to God and love your neighbour.  For them, even “the Hours and the Odes are ecclesiastical traditions” that serve a purpose in certain contexts, but may be abandoned for other forms of prayer in other contexts (letter 143).

I am bringing this up today because we have just begun lent.  One of the things I have discovered over the years is that part of what makes lent a successful journey to Pascha is knowing one’s measure.  There are many who do not know their measure—or feel guilty because their measure is not at the level they think it should be, or (and this is actually quite common) not at the level they think others think it should be.  That is, for a lot of people the Fast is about meeting the expectations they think their priest or their pious friends or their family expects of them.  And in some cases, people have put on themselves a measure that they think some elder (whose book they have read or talk they’ve heard) would have for them.  This always ends badly—either in self-righteous pride if they judge themselves relatively successful or in despondency if they don’t.

St. Isaac the Syrian tells us that the first person one comes to know when one really starts to see or know his or her heart is him/herself.  That is, to begin to know God, you must first begin to know yourself.  It’s amazing how much of our spiritual journey just leads us to this point, the point of starting to know ourselves and thus our measure.  For some of us, it is a decades long journey just to begin to see ourselves.  For many of us, perhaps, it is a life-long journey.

For some of us, part of that journey includes a zealous abandonment of ourselves to a regimen, a rule, a practice that is beyond our measure and leads us to physical sickness or mental breakdown.  There was a time in my life when I felt a strong need to prove to God that I loved Him.  And somehow in my psyche and in the context I found myself in it seemed to me that proving that I loved God meant pushing myself beyond my limits: fasting till I was bumping into walls, rising so early to pray that I was often falling asleep at work, and submitting uncritically to relationships and authority figures to the point of a mental breakdown that caused me to take a year-long vow of silence just to deal with the mental dissonance.  And if I were to distill the lessons of this season of my life into one insight it would be this: I am a mess, but I am God’s mess.  I can’t prove my love to God; there is no need.  God already loves me despite myself.

In letter 151, St. John responds to the concern of a brother who is struggling with a word he had received in an earlier letter from St. Barsanuphius.  The word is this: “Dying unto all people as well as to the world and its bodily comfort leads to perfect prayer.”  The problem this brother brings up is that he lives among people; he even has a responsibility that requires that he give orders to others.  How can he die to all people when he lives among people?  Furthermore, this brother queries, how can he die to fleshly comfort and the world if when he doesn’t get enough to eat and drink of the right foods, he can’t sleep at night and thus is irritable toward those around him.  This questions about food was particularly urgent as Holy Week was approaching.

St. John’s answer to this monk surprised me and amazed me with it’s compassion, wisdom and condescension to this brother’s measure.  Regarding dying to all people, St. John replies,

“What does one do when one is with people and wants to die to them?One neither judges nor despises anyone, while also not holding onto one’s own will; this is what it means to die unto people even as one is living among them.Now, if something happens which, because of some need, provokes you, then react with gentleness to your neighbour who did this saying: ‘God knows what is best.Perhaps God wants me not to find comfort in the flesh but only affliction.’”

Even in the world and among people it is possible to begin to “die to all people.”  Dying to all people is not about physical distance, it’s about letting go of your agenda for other people.

Regarding food, St. John says, “If you receive a second meal on account of your bodily weaknesses, then give thanks to God, judging yourself as unworthy and this will be to your benefit.”  Keep in mind that St. John is saying this about food eaten during Holy Week, a time when some monks eat almost nothing.  This brother is to eat two meals a day giving thanks to God and judging himself unworthy of the measure of the fasting of others.  Doing this, his two meals will be to his benefit (that is, spiritual benefit).  But it doesn’t stop here.  He goes on to say, “and if you cannot do without wine, then take whatever you see that you require, even if it is as much as two cups.  Do not hesitate at all, but do everything for the glory of God.”

Two cups of wine a day during holy week?  Yes.  It is according to this brother’s measure.  And if he acknowledges his weakness, if he judges himself as unworthy, then even this will be to his spiritual benefit, much more so than would be fasting more strictly, which would only increase his weakness and make him a greater burden to others.  St. Barsanuphius says of himself in letter 144, “I know that I am nothing; and if I neglect myself, I am also neglecting you….When I care for myself in the fear of God, am am also caring for you.”

St. John says something similar to a monk who writes him about how he should return to a disciplined life upon recovering from a prolonged sickness.  St. John says to him, “You ought to recite the Psalms a little, to recite [from memory] a little, to examine your thoughts a little….do not bind yourself with strict rules, but do whatever the Lord gives you strength to do….For the perfect fathers were not limited by any particular rule.  Indeed their daily rule included singing Psalms a little, repeating [verses] by heart a little, examining their thoughts a little, taking a little break for food, and [all] this with fear of God” (letter 85).

Growth in the ascetic life is little by little.  Grand gestures only hurt us and manifest how little we actually know of ourselves.  Like the brother who received the blessing to drink two cups of wine a day, even during Holy Week, our spiritual growth through ascetic practice lies not in trying harder or trying to prove to God or to ourselves that we are further along the path than we actually are, that our measure is greater than it actually is.  Rather our salvation lies in living humbly within our measure, pushing a little during lent, perhaps, but always judging ourselves unworthy of a higher or stricter measure.  This kind of fasting will be to our spiritual benefit.