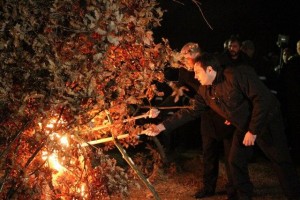 During his visit to this town in northern Kosovo, he attended holy liturgy in the Saint Demetrius Church, and said afterwards that that 2013 should go down in history as the year in which unity was achieved over the issue of Kosovo and Metohija.

Vulin expressed the wish for the year to be one of “great decisions and unity” in which Serbia will show that it will survive and that it has come to stay.

“Serbia is praying for peace, but is asking the world and all those who live in these areas to participate in the fight for peace, just as Serbia is,” the government official said.

He underscored that Serbia will not reduce its presence in Kosovo nor would it close down its institutions. Vulin noted that Serbia should resemble itself as it used to be and set a good example to those who are left behind.

In other areas of Kosovo, including those that like Priština, Peć and Prizren have few Serbs left, the holiday of the birth of Jesus Christ was marked in churches.

In those towns and enclaves where Serbs do live, there was visibly increased presence of the Kosovo police, KPS.

However, Christmas Eve did not go without incidents. In the town of Đakovica, members of the radical ethnic Albanian Self-Determination Movement party attempted to prevent a group of Serbs from reaching a local Orthodox church.

Central ceremonies marking Orthodox Christmas in Kosovo and Metohija are being held on Monday in the medieval Serb monastery of Gračanica, and the nearby enclave.

Speaking in Gračanica on Monday before the incidents there, Aleksandar Vulin stated that there can be no partition of Kosovo which the Serbian platform on Kosovo and Metohija clearly shows, and called on the international community to ensure safety for all those living in the area.

“This is the year of hope in which Serbia has come to face the world and said what it considers to be a just and lasting solution, “Vulin told reporters, and added that 2013 is the year in which Serbia expects the whole world and the international community to understand, accept and make it clear that there can be no just solution without consent of Serbia and Serbs in Kosovo and Metohija.

Vulin underscored that “this is the year in which the international community is expected to behave in keeping with the obligations it took on”.

“We hope this is the last time that the Serbian president is banned from being with his people because an external factor has set forcefully itself between them,” Vulin said and added that Serbia wants UNMIK to behave in keeping with its mandate and authorities and ensure rule of law in Kosovo and Metohija.

Vulin underscored that Christmas was a big holiday of hope and peace for all those who believe that Kosovo and Metohija is an integral part of Serbia and this will never change.

He noted that Serbia wants peace but it cannot fight alone.

There must be no violence in Kosovo and Metohija and we want the international community to behave in keeping with this, he said.

Vulin stated that this is the year in which major important decisions would be adopted.

“This is a historic year in which Serbia will hopefully win what everyone believes in,” he said.

Vulin noted that 200,000 displaced and banished Serbs are no longer in Kosovo and they cannot celebrate the holiday at the place of their birth.

He noted that everyone has to remember over 150 damaged and destroyed Serb churches and monasteries but thousands of murdered and missing Serbs also need to be mentioned, as well as over 5,000 Serb tombstones were destroyed.