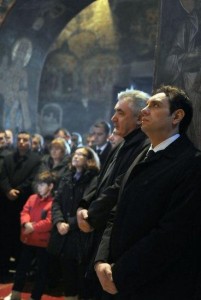 The medieval Serb Orthodox monastery is located near a Serb enclave south of the Ibar River.

Government Office for Kosovo and Metohija Director Aleksandar Vulin told Tanjug that he wished to visit the police station in Gračanica, where the Serbs were being held.

He explained that nine young men from northern Kosovo, and one local youth, who came to the police station to inquire about the group, were all brought in.

Vulin stressed that he discussed this development with EU’s special representative in Kosovo, Samuel Žbogar, and that the Serbs were “detained, but not arrested”.

After he headed toward the police station in Gračanica, Vulin was stopped by members of the KPS who told him they were ordered to “escort” him to one of the crossings on the administrative line between Kosovo and central Serbia.

Pantić, who is also Vulin’s deputy at the Office for Kosovo and Metohija, said that he had received the confirmation of this unofficially from the KPS, and that Belgrade expected the international community to prevent this type of provocation.

Pantić also revealed the reason the group was brought in: they are suspected of being “members of the civil defense of the Serbian security services”. This official denied the claims, and said the arrests were treated as “a serious provocation” staged on the “greatest and most joyous Christian holiday”.

Belgrade expects the international community to urgently exert influence on Kosovo’s Albanians to release the Serbs from custody, Pantić added.

Previously, the interior minister of the government in Priština, Bajram Rexhepi, said that nine persons were arrested in Gračanica and that he “was informed that the reason was that they were wearing insignia of the civil defense”.

A large number of KPS members were seen in Gračanica this Christmas Day, according to news agency reports.