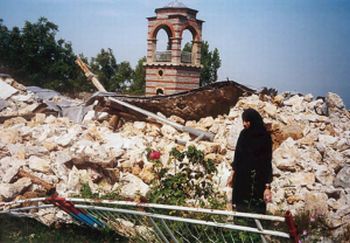 The funds allocated by Russia for the UNESCO-supported project for the restoration of the Serbian Orthodox Church’s shrines in Kosovo and Metohija were reported on August 1, 2012, to have reached the contractors. At present, a Serbian and two Italian companies, winners of the contest, have already started the work planned to be completed in May 2013.

An agreement between Russia and UNESCO on the participation of the Russian Government in financing the restoration work was signed in November 2010 at the UNESCO headquarters in Paris. The Russian Government has decided to make a 2-million usd voluntary targeted contribution to UNESCO for the purpose.

Russia’s financial participation in the UNESCO project provides for the repair of facades and the restoration of old frescoes in the monastery of the Pec Patriarchate, in the Grachanitsa and Vysoki Decani monasteries and in the church of Our Lady of Ljevis in Prizren. These shrines, just as over 150 buildings belonging to the Serbian historical and cultural heritage in Kosovo, were damaged in the course of the NATO bombings and the 1998-1999 armed conflict and the anti-Serbian pogrom in March 2004.

The Church of Our Lady of Ljevis in Prizren dates back to the 9th century. It is one of the oldest churches in Kosovo. Its frescoes created during re-panting in 1306-1306 are recognized as a masterpiece of the 14th century church art. The church’s support frame was damaged by bombs, and the frescoes were damaged and covered with a layer of soot from arsons committed by Albanians by throwing Molotov cocktails. With the connivance of the Kosovo police, the church of Our Lady of Ljevis was repeatedly loomed. The latest theft of a piece of the roof, which took place in April 2011, still remains uninvestigated. As a result of the damaged roof, rain water began to percolate through, thus affected the state of the old frescoes.

The monasteries whose restoration is sponsored by Russia have also been repeatedly subjected to vandalism. The Visoki Dechani Monastery founded by the Holy King Stefan Uros II in 1327 is one of the greatest specimens of the medieval architecture and painting. Extremists attacked it several times with grenades. Though it was under the KFOR protection, the monastery was mortared again in 2007, and in April 2012 there appeared on its walls the signs ‘The property of the Kosovo Liberation Army’, a terrorist organization notorious for the oppression and physical elimination of the Serbian Orthodox population of the region.