When the St. Simeon Serbian Orthodox congregation began building a new church in 2007, it adopted a centuries-old style with the idea that the building would be around at least that long. 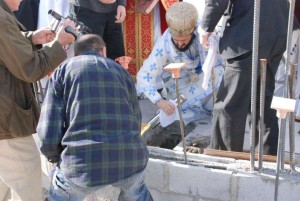 “We don’t want to go back to our people two or three times and say, we made a mistake and need to build another one,” said the Djordjo Kupresak, the full-time caretaker for the current church and social hall at 3950 S. Jones Blvd. “We want to make this church forever.”

The dream, however, collided head-on with the economy of contemporary Las Vegas. Work halted in spring 2009 while the church was still a shell, as the money contributed by the congregation ran out, no bank would underwrite a loan and no wealthy benefactor appeared with a check.

But rather than completely shut down, as has happened to projects across the valley, St. Simeon turned to grass-roots fundraising efforts such as dinners featuring different styles of Serbian food and a program to encourage contributions of $1 a day. Not only have the donations paid off all the debt but they have generated enough money to restart work earlier this year to finish the top third of the exterior, distinguished by its 100-foot tall copper-roofed dome and shorter bell tower cupola with brown and beige tile.

At this point, said local engineer John Grujicic, who has taken on the role of volunteer contractor, about $2 million has been spent on the church with about that much more needed for completion. Instead of pursuing a loan again in a slowly improving economy, he said the congregation will continue its approach of self-reliance even though it could extend the project a decade or more.

“In this economic climate, we are happy we don’t have a loan where we have to pay $15,000 a month,” he said. “We want to make sure that this property and this church stay with us.”

Variations of St. Simeon’s experience have played out among nonprofit organizations all across the valley. Starting in 2007, then intensifying the next three years, “Just about everybody was struggling because of the compounding of the economy affecting donations as economic needs rose at the same time,” said Elliot Karp, CEO of the Jewish Federation of Las Vegas.

In the past couple of years, nonprofits have seen a partial rebound, he said. The federation’s annual fund this year brought in $2.8 million, more than double the nadir of $1.1 million in 2010 but less than the $4 million peak of six years ago.

While not familiar with St. Simeon, Karp said it is “inherently more difficult” for individual congregations to raise money than larger groups because of a smaller donor base.

St. Simeon’s mailing list carries about 450 names, with attendance at Christmas and Easter nearly doubling that. About 300 of those steadily donate money. The large majority come from Bosnia, with many having fled the Balkans war in the 1990s, and work hourly jobs in the visitor industry.

United Way of Southern Nevada has seen flat to slight growth in contributions during recent years, anchored by about 30,000 people who designate a $5 or $10 deduction in each paycheck, said CEO Cass Palmer. But he has seen improvement recently as “people become more comfortable about their job security.”

By trying to develop steady income stream, “that is the way to go,” said Palmer, referring to St. Simeon. “I gotta commend them on their business strategy.”

He has seen a number of nonprofits stumble or even fail because they took on commitments or debt without the revenue to cover them.

St. Simeon has owned its land on South Jones Boulevard just north of West Flamingo Road since the late 1970s, with its current nondescript building dating to 1983. In the late 1990s, the congregation began planning the new church to look like something plucked from the 16th Century Balkans rather than in the modern style that predominates in Las Vegas. They went in this direction despite a construction cost estimate far higher than a contemporary design for such features as a copper roof, rosette windows, three 10-foot-tall bronze crosses and a planned plaster interior covered with frescoes of Orthodox icons.

By 2007, the congregation had raised about $1 million, but could not secure a bank loans for a modestly sized congregation with some white-collar professionals but mainly working-class people. Nevertheless, the project went ahead even as the economy darkened.

It cost about $1.6 million to get the church to the point it was enclosed and secure, forcing St. Simeon to borrow from its members before stopping work in 2009. Grujicic said the debt had reach about $400,000 at one point, but continued fundraising allow all the loans and contractor bills to be covered the next year.

Then, the fundraising was geared to the future. The dinners, with menus designed to highlight different regions of Bosnia, bring in about $15,000-to-$20,000 each. Another time, St. Simeon tried a $50 per person wine tasting, with the church as the backdrop.

Some St. Simeon parishoners have talked about lining up prominent local officials for fundraisers or perhaps some form of government financing, but Grujicic downplays hopes along those lines.

As the funds build up, Grujicic’s game plan calls for phases that include installing lightning protection – one strike could melt the entire copper roof, he said -finishing the middle third of the exterior, then the bottom third, the surrounding grounds that are now dirt before moving to the interior.

This strategy will remain in place, even though he is concerned that construction costs could rise in the coming years. “We can’t go anywhere else for the money,” he said. “This is our only option.”