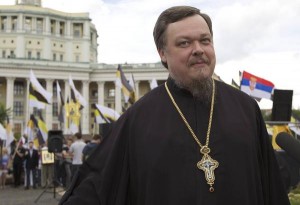 A leading official of the Russian Orthodox Church questioned “market fundamentalism” and said that “it is necessary to transfer from [an] economy of growth to [an] economy of self-sufficiency,” according to a report by the Russian news agency Interfax.

“Sooner or later [economic growth] will stop, as [the] resources of the planet are limited, and demand, even senseless, can’t grow forever,” said Archpriest Vsevolod Chaplin, who leads the Moscow patriarchate’s Department for Church and Society Relations.

“Self-sufficiency and self-limitation in acquiring earthly goods were always characteristic of Orthodox civilization,” he added. “Its traditions teach not to endlessly multiply material riches, but to be happy with the little or at least sensible amount of earthly goods. I think that the future belongs to such [an] attitude.”