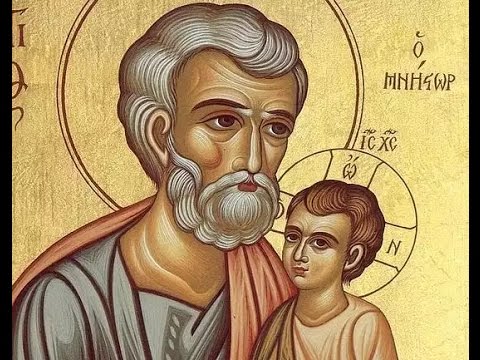 This Homily was given by Dcn. Michael Schlaack on the Sunday after the Nativity of our Lord

It is only appropriate that today, the first Sunday after the Nativity of Our Lord Jesus Christ, that we commemorate a man who played a pivotal role in God’s plan for the Incarnation of His Son.  Today is the commemoration of St. Joseph the Betrothed, the stepfather of Jesus; a man who not only shows us what it means to accept the vocation of fatherhood, but also provides a perfect example of the importance of listening and obeying when God speaks.

The Gospel accounts of St. Joseph the Betrothed are mainly limited to the Nativity narrative.  Other than a brief mention made by the Theotokos in St. Luke’s account of the 12-year old Jesus teaching the elders in the Temple (2:42-50), St. Joseph seems to have disappeared early in Jesus’ life.  We know from the Protoevangelium of James that Joseph was an old man when he was chosen by God to care for Mary.  According to the account, a dove came out of Joseph’s staff and flew upon his head.  This would prove to be the first of many signs from God regarding Joseph’s care of Mary and God’s future Son.

As demonstrated throughout the Nativity narrative, God was always in control, providing guidance to those who were willing to hear and obey.  We see this in the choosing of Joseph as well as the angel’s annunciation to Mary of the miraculous conception of God’s Son by the Holy Spirit.  God’s love and guidance continued throughout the first years of the young Christ child’s life as witnessed in the Gospel reading today. And God was even willing to use non-believers to achieve His ultimate purpose, for we read in the proceeding verses from St. Matthew’s Gospel that the Magi, pagans from the East, also listened to the revelation received in a dream and refused to tell Herod the location of the Christ child (Matt. 2:12).  It is amazing how God can use even those who do not believe in Him to achieve His purposes.

In our Gospel lesson we read of three incidents where God spoke to Joseph regarding the safety of the young Jesus.  First, an angel warns Joseph of the eminent danger to the Christ child should they stay in Bethlehem.  Herod, fearful of the young “King of the Jews” whom the Magi came to honor, decided to kill all the male children two years old and under who were living in Bethlehem and the surrounding districts.  This meant that the Holy Family would have to travel quite a distance to be safe from the edict of the murderous king.  The angel of the Lord told Joseph to flee with Jesus and Mary to Egypt and to wait for another revelation from the Lord (Matt. 2:13).  Being an obedient and faithful man, Joseph did as he was told, saving the life of the infant Jesus.  Once again Joseph’s family was on the move, but this time it was not with a pregnant woman but a young child.

The second of Joseph’s revelation occurred after the death of Herod, where Joseph was told again in a dream to leave Egypt and return to the land of Israel.  The Gospel account now takes an interesting twist when Joseph finds out that Archelaus, Herod’s son, was reigning over Judea.  It seems apparent that Archelaus’ cruelty was either equal to or greater than his father’s, since Augustus Caesar, the Roman Emperor, banished Archelaus for his cruelty.  Now Joseph receives his third revelation from God, and moves his family to the region of Galilee, in the city of Nazareth.

As we can see from all this interaction between God and Joseph, God was always in control, leading Joseph as he moved Jesus and Mary to safety.  And while it is quite remarkable that God, through His messengers, spoke to Joseph, it is even more remarkable that Joseph listened.  And he not only listened, but he also obeyed, and as a result tragedy was averted.

Notice how God communicated with Joseph: It was not by some great, miraculous sign.  It was not the result of direct, physical visitation by a heavenly body.  Either of these forms of intervention would surely be hard to ignore.  But instead, God chose to speak to Joseph in his sleep, through dreams.  This was the small, still voice not unlike the encounter of the prophet Elijah when he was at a low point in his life, hiding from Ahab and Jezebel on Mt. Horeb.  Not in the powerful wind nor earthquake nor fire did Elijah encounter God, but in the sound of the gentle breeze (3 King. 19:11-12).  This is where we will often receive our revelations: In the quiet of the night, or in the stillness of the day.  The same God who made the thunder and lightning, earthquakes and volcanoes, is the same Heavenly Father who made the gentle rain.  He is the same God, and we need to listen just as intently to His voice in the soft breeze as we would when He speaks with a voice of thunder.

As we see from this Gospel account, to hear God we must be open to His direction.  Revelation, the revealing of God’s will in our life, requires more than just a pair of ears: it requires a tender heart that is willing to listen when called.  Many of us today do not believe that God will communicate directly with us.  They go through the motions of prayer without any expectations that they will receive an answer.  Maybe God is trying to talk to us, but we are too busy trying to listen with our ears instead of with our heart.  Maybe we do not want the God who speaks in our dreams or in gentle breezes; maybe we want the God Who speaks in thunder and in earthquakes.  If that’s what we are waiting for then I am afraid that we be missing a lot of what God wants to tell us.

We need to begin to listen like Joseph, hearing God speak through His angels.  At our baptism and chrismation, we are each given a guardian angel.  Many of us see our angel as nothing more than a mute co-pilot who just goes along for the ride.  And while that is partly true, I do believe that our guardian angels are also the messengers of God’s revelations.  We see this in all three of the warnings Joseph received in our Gospel lesson.  God used His heavenly messengers to deliver His directives.  It is interesting to note that even the pagan Magi were warned of impending danger.  If God is willing to send His messengers to pagans, then certainly He will use our guardian angels to keep us safe as well.

To listen like Joseph means to listen with a heart that is tuned in and ready to receive direction from God.  And when we receive that message then we must obey.  The Gospel account would likely have had a much different ending if Joseph chose to ignore those warnings he received in his dreams.  Maybe he could have just discounted them simplify as nightmares and ignored the revelation that God provided.  I am sure if he counted the cost in time and money, he may have thought it would be easier to just stay where he was and take his chances.  But people who are willing to be used by God will not count the cost in time or money, for they know that God must be obeyed.

Our secular culture has no room for angels or heavenly revelation.  People who claim to have spoken to angels are generally considered crazy.  But as Christians we know that God is not some remote, absent collective consciousness, that has little or no influence in our daily lives.  Instead, we know that He is the God of the living; a loving Father Who acts every minute of every day on our behalf.

So, let’s give God a little credit!  Maybe the next time we hear that small voice in our heart nudging us to do something, we should thank God for this revelation and then obey.  Consider these thoughts to be direct messages from God through your guardian angel.  Remember that God is in the same place He has always been; it is we who have moved.  So, let us commit to moving back to the true center of our lives, leaving our selves open to be led by God.  Let us each learn to listen like Joseph, and maybe in some small way we, too, can save Christ from a world that is bent on destroying Him and His message of salvation.