Living Liturgy: the Liturgical Method of the Fathers

The Deacon says to all present, “In the fear of God and with faith, draw near!” and Eucharistic participation is expected from all—if not in fact, then at least in theory. (The Fathers, being realists, knew how little theory and fact sometimes went together!) Nevertheless, the liturgical texts themselves called all to Communion (not just the ones who felt they were worthy or ready that Sunday) and the Litany of Thanksgiving assumes that all have in fact received, for the Deacon says “Having partaken of the divine, holy and awesome Mysteries of Christ…”
| 07 April 2009 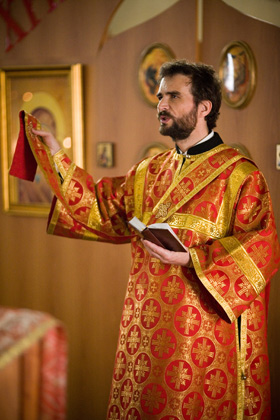 This is especially so in using the Fathers as models for our liturgical life. We cannot artificially reproduce the Liturgy of 1st century Palestine or 2nd century Rome or 4th century Constantinople. All liturgy changes and develops, and our Byzantine Liturgy perhaps most of all and we must receive with gratitude (and discernment) the Liturgy we have received throughout the past 20 centuries. Nonetheless, I would suggest that there are certain timeless principles we can glean from the Fathers which can and should guide us in our liturgical life.

First of all, for the Fathers, all words in the liturgical services had a counter-part in lived experience and a set purpose. Words were not just said because they had a religious feel to them or because they were inspiring or poetic. They were said as expressions of actual actions and experiences in the congregation.

For example, when the Deacon said “Pray to the Lord, you catechumens!”, he was actually inviting the catechumens present to pray to the Lord. When he said “Bow your heads unto the Lord, you catechumens!”, it was expected that this directive to those people would be followed by the appropriate action—namely, their bowing their heads unto the Lord. That was why it was said. When he said the words “Depart catechumens! All that are catechumens depart!”, it was said solely in order to make them leave—and the Church service waited until they left before proceeding to the next liturgical action. It was not a poetic, symbolic way of telling the faithful to “banish and cause evil thoughts to depart from our minds”, as a kind of mystical metaphor (as later writers have suggested). Rather, the words meant just what they said.

Thus, in a truly Patristic liturgical methodology, there was a direct correspondence between what was said and what was expected to happen. Words were said in order to accomplish something specific.

Secondly, for the Fathers, liturgical worship was a corporate and united action. That is, in the Liturgy, all people present had their particular and different roles to play, but all were conscious that the Liturgy was something they all did together. Each had his own contribution to make, and their contributions were different. But they were contributions towards one and the same thing. The Liturgy was not something that the clergy and the choir did, while the passive faithful watched, listened and were edified. The Liturgy was not a sacred concert put on for their benefit. Rather, it was something they did along with the clergy and the choir.

For example, the Anaphora—the prayer consecrating the Bread and Wine to become the true Body and Blood of Christ—was their prayer as well. In this prayer, of all parts of the Church had their specific function to perform. The priest (or bishop) uttered the words of the prayer. The deacons assisted physically, pointing to the Gifts and lifting them up. The sub-deacons fetched the censer and the hot water. The faithful interjected their “Amens” and other praises, and sealed the entire Anaphora with the final “Amen” at its conclusion. Thus the Anaphora was not so much done for the people, as by the people.

Thus in a truly Patristic liturgical methodology, there is a felt and tangible unity between clergy and laity, as they work in concert as partners in the liturgical actions.

Finally, for the Fathers, fervent commitment of the entire Church is assumed. In the classic liturgies, those not committed or canonically allowed to commune of the Gifts were dismissed and sent away. This is the meaning of the dismissal of the catechumens and the closing of the Doors. It was not a matter of the assembled Church being some sort of “gathered sect”, a kind of collection of the pure and elite. The Church knew that it was territorial, gathering good and bad together (cp. Mt. 13:47—50) and it had no interest in pre-empting or anticipating the Final Judgment. Nonetheless, it did preserve an inner integrity and maintain some basic outward standards. Those present were assumed to be committed to Christ—or at least, they had professed that they were—and were treated as such.

Thus, for example, it called everyone in the Church to Holy Communion. The Deacon says to all present, “In the fear of God and with faith, draw near!” and Eucharistic participation is expected from all—if not in fact, then at least in theory. (The Fathers, being realists, knew how little theory and fact sometimes went together!) Nevertheless, the liturgical texts themselves called all to Communion (not just the ones who felt they were worthy or ready that Sunday) and the Litany of Thanksgiving assumes that all have in fact received, for the Deacon says “Having partaken of the divine, holy and awesome Mysteries of Christ…”

Thus, in a truly Patristic liturgical methodology, real faith on the part of the worshippers at the Eucharist is assumed.

In the liturgical practice of the Church today, many questions are being asked—questions about the use of a more open iconostas, about the audibility of prayers, about congregational singing—in fact, a multitude of difficult and controversial questions. It is not necessary, perhaps, to achieve complete uniformity in these things—nor perhaps is it even desirable. There was a multitude of usages and variations in the Patristic Church, even in their ways of serving the same Liturgy of St. John Chrysostom and perhaps allowance of some variation might prove useful today . And certainly, mutual love should characterize our relations between us, in this as in all things. As the Church today struggles with these questions and finds its way in things liturgical, (obviously in obedience to its hierarchs), the underlying principles and methodology of the Fathers may prove to be a helpful guide.