Living the Gospel: the Life of St. Anthony 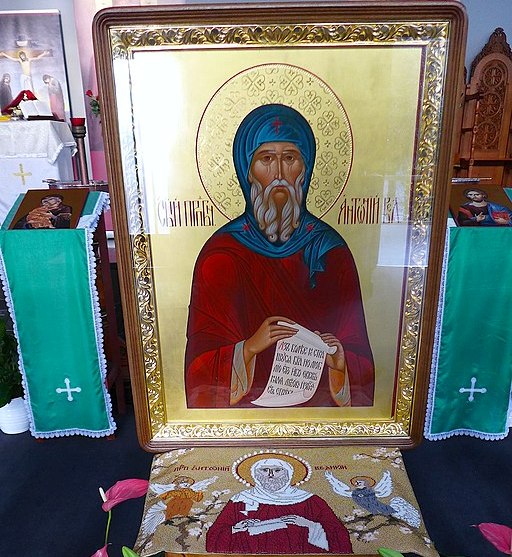 Today, I want to tell you a story about St. Anthony, who is one of the Great Saints of the Early Church and considered by many to be the Father of Monasticism.

When his parents had died, St. Anthony was around 18 years old.  Living in Egypt with his sister, they spent six months tending to the 300-acre property that was the inheritance from their parents.  St. Anthony had a relative simple life.  He listened to the words of scripture in the Church.  He prayed at home and kept the fasts.  His discipline and obedience to the Church was not unlike what we see with so many faithful that flock to Churches today for the Divine Services.

6 months after his parents had passed away, St. Anthony found himself in Church one Sunday, thinking deeply about what his future would hold…specifically in his relationship with Christ.  While he was deep in thought, the Priest came out for the Gospel reading…and read these words:

“You still lack one thing. Sell all that you have and distribute to the poor, and you will have treasure in heaven; and come, follow Me.”

The Gospel reading of the Rich Young Man that St. Anthony heard the priest chant, caused an immediate change…an immediate state of repentance to overcome him.  He didn’t leave the Church dejected like the Rich Young Ruler, he heard those words…heard the Good News…and allowed it to penetrate his heart.

St. Anthony left the Church, didn’t even go home.  He first turned over his property to the elders of the village and then went home, sold all of his possessions, gave them to the poor, made sure his sister was taken care of…and went and followed after Christ.

St. Anthony went out under the tutelage of many holy people who he had known throughout the villages.  He didn’t just hear the Gospel, he learned to live it.

St. Athanasius, who wrote his life, said that all of his desire and energy were focused on the disciplines that he had learned from scripture.  He worked with his hands and never allowed himself to sit still…because he remembered in St. Paul’s letter to the Thessolonians, words like:  “He who is idle…let him not eat.”  He would eat what little bread he earned, and then split some of it apart to give to the needy.  He was in constant prayer, because the Gospel says to pray without ceasing, and in secret.  St. Anthony didn’t just know the Bible, like so many of us do…he LIVED IT with every breath that He had.

Obedience, that difficult virtue that we always seem to have a difficult time mastering, St. Anthony learned it to perfection.  When he visited holy people, he would learn from them the various virtues that they had mastered.  He learned unceasing prayer from one and how to combat anger from another.  He was taught from one endurance in the spiritual life, and another he learned how to fast and how to sleep on the ground.  He learned meekness from another and long suffering from someone else…taking the qualities of many Holy Teachers and practicing them all.

To the surprise of so many out in the world…this is actually where St. Anthony’s struggles began.  As Christians, we will never get attacked harder by Satan and his demons, then when we are trying to live a holy life.  The devil ignores people who live in filth and darkness…because he knows he has them.  He focuses his attention on people trying to live a Holy Life…and St. Anthony was no exception to these attacks.

St. Athanasius said that the devil “attacked the young man, disturbing him by night and harassing him by day, so that even the onlookers saw the struggle that was going on between them.  The one would suggest foul thoughts and St. Anthony would counter them with prayers.  The one would fire him with lust, and St. Anthony as one who seemed to blush, would fortify his body with faith, prayers, and fasting…

The rest of the account of St. Anthony’s life talks about all kinds of ways that St. Anthony was tempted…and how he was able to overcome them.  The blessed Saint struggled with the devil for 20 years in the dessert alone, before finally achieving some measure of calm.  His ascetical way of life became known all throughout the Christian world, and men and women travelled from all over to seek his guidance.  They eventually started setting up little monasteries around his cell, and he taught them all how to live a holy life.

A lot of St. Anthony’s writings and words have been passed down to us today, and on his feast day, I thought I would share just a few…in the hopes that perhaps, like him on that Sunday when he heard the Gospel…one of these might speak to our hearts, and cause us to radically devote our entire life unto Christ our God.

+Whoever has not experienced temptation cannot enter into the Kingdom of Heaven. Without temptations no-one can be saved.

+What is slander? It is every sort of wicked word we would dare not speak in front of the person whom we are complaining about.

+The devil is afraid of us when we pray and make sacrifices. He is also afraid when we are humble and good. He is especially afraid when we love Jesus very much. He runs away when we make the Sign of the Cross.

+The time is coming when men will go mad, and when they see someone who is not mad, they will attack him, saying, ‘You are mad; you are not like us.

Through the Prayers of St. Anthony, O Lord have mercy on us and Save us…AMEN