In marriage, love must be an ever expanding circle. Our children naturally expand its boundaries, but each partner must expect and understand the full implication of "sharing their love" with each other's family. They should also understand the proper boundaries to this sharing of love, and firmly resolve that their love for each other and the marriage are their first considerations.
Archbishop Lazar Puhalo | 15 June 2010

From “A series of talks and discussions for young adults”

Marriage unites two people in a growing bond of love and makes them “one.” But marriage involves more than the two people being united. The relationship between each individual and their family and friends is going to change __ sometimes dramatically. In some instances, old friendships will slowly disappear. Family relationships will not disappear, however, and each partner in a marriage will acquire a new or “extended family.”

From an Orthodox point of view, parents and family are very important. An Orthodox couple who are planning to marry should work out their relationship with each other’s parents and family before their marriage takes place. Much pain and difficulty can be avoided if there is a loving, harmonious relationship among the extended family, on both sides. The basis for this love and harmony is the love between husband and wife. A person is expected to “leave mother and father and cling” to one another. In reality, however, when a couple marry, each of them usually marries into a new family of in-laws. The manner in which each spouse relates to the new “expanded family” can have a dramatic effect on the condition of the marriage. It should not always be this way, but it usually is, and this should be taken into account in the early stages of planning for a marriage. There are two special reasons for this in modern society.

First of all, we do not have the cultural and social support which existed in previous times, and which controlled and helped shape our clan and tribal relationships. The old, clear and inviolable standards of relationships __ even the beautiful and enduring Serbian “Kumstvo” __ have all but vanished in the modern hi-tech and highly mobile society.

The second problem is complex; we find that marriages in which a young couple live at home and go directly from their family setting into marriage, are especially vulnerable. This was not the case when the former cultural and social frameworks were strong, but it is now. We now find that when two people have lived on their own for a while and “discovered themselves” before they enter into marriage, the marriage tends to be stronger. There are clear reasons for this, but it is an unfortunate situation. From a spiritual point of view, it is better if a person does not live alone, subjected to extra temptations. It is better to live with one’s family, and leave home only when one marries but, in our society, this is only an ideal. When it does happen, each partner is obviously more closely bound to his or her family, and too often the other partner is not merely marrying the spouse, he or she is “marrying the spouses family.” 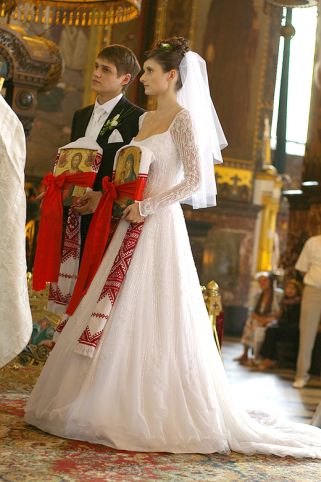 It is important for the priest to discuss this with a couple who plan to marry. It is important for a couple to realize that their love is going to have to extend outward to their new relatives. Their love must expand beyond themselves and encompass the “new family” they are marrying into.

Each partner should weigh his or her relationship with and feelings toward the extended family and realize the full implications it holds for their marriage. This matter must be examined and discussed frankly as part of the priest’s preparatory discussions with the couple.

In marriage, love must be an ever expanding circle. Our children naturally expand its boundaries, but each partner must expect and understand the full implication of “sharing their love” with each other’s family. They should also understand the proper boundaries to this sharing of love, and firmly resolve that their love for each other and the marriage are their first considerations. The couple should carefully resolve, ahead of time, questions about the limits of their parents influence and involvement in their married life. They must put each other first and their marriage above every consideration, while resolving to love and respect each other’s parents and relatives.

The priest, counselling a couple who desire to be married, should never neglect to discuss this important matter of relationships with the “extended family.” Continued parental dependency in one or both marriage partners is a frequent source of conflict and stress. It occurs predominantly by (but not exclusively among) individuals who have not lived away from home before their marriage.

Over dependency on parents and/or parental over protectiveness can be a real destroyer of marriages if it is not recognized and dealt with effectively. Gentleness, compassion and understanding are necessary in these cases, but firmness and a primary loyalty to the spouse are equally necessary.

Other related problems are discussed in the section, “Stress Points in Marriage.”

There are many stress points in marriage, and we cannot discuss all of them here. There is, however, one important and pivotal problem which must be looked at.

One major stress point which can be quite serious, and which often requires special love and work to come through, is the differing rate of growth and maturity which is often experienced by each partner in a marriage.

In this present context, let us repeat something that was said earlier. None of us is a “complete package.” We are all constantly changing, hopefully growing and developing. No two people grow and develop at the same rate and to the same degree. Unfortunately, some of us actually stop growing mentally, emotionally and spiritually, and begin to stagnate and then degenerate. Often the elusive, almost un-definable gradual breakdown in a marriage is precisely this difference in the growth and development of the partners in marriage. It does not matter whether both partners are working outside the home or the wife is working in the home, one of the two will almost certainly mature more quickly and more completely, and the spiritual, emotional and intellectual growth rate may very easily be different. This difference in development can cause a subtle development of a gulf or division between a couple and, very often, neither party realizes the source of the gradual feeling of “drifting apart.” If they do realize it, it can be difficult to discuss in a positive manner. Men often feel threatened by a wife’s growth and women who work in the home often feel oppressed and “cheated” of the opportunity to grow.

Actually, in a relationship with true love and commitment, a couple should grow and develop not merely with each other, but because of each other. It is important to realize the possibility of this problem arising and discuss it at the very beginning of a marriage; indeed, it should be an integral part of the pre-marital counselling. Personal and individual growth, maturing and development is something that should be planned for, and from the very beginning of an Orthodox marriage, it should be resolved that this process is going to be founded on genuine spiritual growth. It should be clearly understood that mutual spiritual growth and development is a fundamental reason for an Orthodox marriage in the first place. If this is clearly established, and the possibility of differing rates of intellectual and emotional maturing is understood from the beginning, it will be infinitely easier to cope with such a problem if it should arise. Any family, whether it consists only of husband and wife, or includes a number of children, must constantly struggle to grow, develop and mature spiritually, emotionally and intellectually together, as a unit. This is difficult to accomplish and, from an Orthodox perspective, it requires much prayer and a clearly Christ-centred family life.

It is evident that this is something which must be carefully planned for in pre-marriage discussions and during the early years of a marriage. From an Orthodox Christian perspective, it is an essential part of the reason for a couple to want to marry each other, and it is a fundamental aspect of the very nature of marriage.

When we speak of true morality, we are not referring to simple obedience to a system of law…

As we prepare to celebrate the Nativity of Christ, it is customary for all hierarchs to issue a…

The majority has departed from the Orthodox Christian gospel, world view and approach to life to such a…