Manifesto in a Grocery Line

A lot of life happens in the grocery checkout lane. Sometimes when I am waiting to make my purchase, clerical garb and all, people quite naturally engage me in conversation. Recently, however, I had the odd experience of being a catalyst for a conversation between two young men in line—merely by just standing there. I was clearly not invited to participate; it was far from comfortable.
Fr. David Thatcher | 21 January 2010 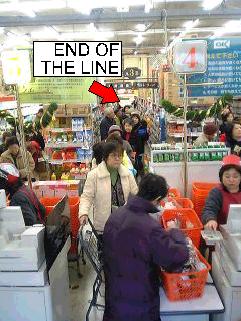 A lot of life happens in the grocery checkout lane.  Sometimes when I am waiting to make my purchase, clerical garb and all, people quite naturally engage me in conversation.  Recently, however, I had the odd experience of being a catalyst for a conversation between two young men in line—merely by just standing there. I was clearly not invited to participate; it was far from comfortable.

“If someone could prove to me that there is life after death, I’d consider being good,” said the clean-shaven one.

“Yeah, no one can prove it.  It’s better to just have a good time.”  And on they went (their language altered to protect the innocent): young buck philosophers in ball caps, buying beer for a Saturday night reverie.

My guess was that their conversation was not simply metaphysical speculation—life after death, a God who judges, and all that.  If it was, I would have jumped in with both feet (hopefully not in my mouth).  No … my presence, as clergy, made them uneasy—and they didn’t like that one bit.  Their so-called conversation was more a defiant manifesto, to me and to all within earshot: their lifestyle was subject to no scrutiny by God or man, least of all by a beefy, bearded, bald man in a cassock.

Yet, I will not attack the shape of their reasoning. In fact, I would go so far as to say that their logic is impeccably biblical, was it not?  St. Paul said it himself:

“For if the dead rise not, then Christ is not raised: And if Christ be not raised, your faith is vain; ye are yet in your sins.  Then they also which are fallen asleep in Christ are perished.

One may doubt whether our two young friends knew that they reflected divine logic, or that they’d much care. Theirs is a far too convenient skepticism: a macho act of bravado masking uncertain hearts.  Why?  Because their logic is only as good as their premise—the Big “IF.”  IF this life is all there is, then….  It is a huge assumption—one that we as Christians obviously do not share.

So how do we connect with folks like these?  How do we as Christians persuade the “worldly wise” that they are dead wrong?  First, we are not in the business of proving anything; as Christians: we base our position regarding eternal life, regarding the resurrection, on FAITH. Of course, there are good reasons for believing in the resurrection of Jesus Christ, and so in “life after death.”  But it always comes back to FAITH, and embedded in that is the tremendous reality of HUMAN FREEDOM.  God doesn’t overwhelm us with Himself.  He doesn’t shove anything down our throats when He revealed Himself to us in Jesus Christ.  In fact, if anything, the opposite is true.  God comes to us most meekly, humbly.  God’s glory is the Messiah nailed to the Cross.  Jesus stands before us, the One whose Kingdom is not of this world, as He once did before Pontius Pilate. And He awaits our decision as well: how will we judge this One? As Father Alexander Schmemann once wrote:

“God Himself stands in front of us, not in greatness and glory, for then we would submit ourselves to Him as cowardly slaves; no, He stands before us in a crown of thorns and a purple robe. It is only in relation to Him that we are free, as Pilate was free, and in this freedom each of us determines his own eternal destiny.”

And so the real question that each one must confront is: What are we going to do with this One called Jesus?  It was Pilate’s question, and we know his answer.  It was also the question that confronted those at the Cross: the Centurion, the thief who believed, and others.  Perhaps these young men, who we do not judge, never really encountered such a one as our crucified Lord.  If only they beheld the Lamb of God, the eternal Word of God become flesh, dying for them, they would finally have all the proof and true freedom they needed.  God knows.