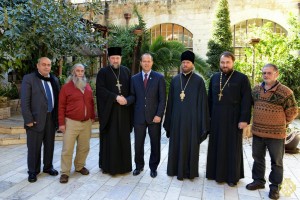 Archimandrite Isidor and hegumen Feofan, head and deputy head of the Russian Ecclesiastical Mission respectively, clerics and sisters met Mr. Barkat at the entrance to the Mission.

The participants in the meeting discussed activities of the Russian Ecclesiastical Mission and pilgrimage to the Holy Land. Mr. Barkat noted that the number of tourists and pilgrims to the Holy Land in 2012 had reached a record figure of over three million people, with around five thousand pilgrims having come from Russia.

Raised at the meeting were also issues relating to the buildings and other immovable property belonging of the Russian Ecclesiastical Mission.

Mr. Nir Barkat invited the head of the Russian Ecclesiastical Mission to the traditional New Year’s reception and to the International Conference “World Pilgrim Cities” due to be held in Jerusalem next spring. Archimandrite Isidor thanked the guest for the visit and expressed his hope that decisions would follow the discussion.

Mayor of Jerusalem made an entry in the Book of Guests of Honour, expressing his gratitude to the members of the Mission for warm hospitality, web-site of the Russian Ecclesiastical Mission in Jerusalem reports.