Meditations on the Nativity of Christ

Nearly 1600 years ago there arose a great controversy between the Patriarchs of Alexandria and Constantinople over the nature (or natures) of our Lord Jesus Christ.

Nestorius, the Patriarch of the Imperial City (Constantinople) had declared that it was wrong to refer to the Virgin Mary as ‘Theotokos’ (Birth-giver, or, Mother of God). He stated that Mary was the mother of the man Jesus, but could never be the Mother of God (who has no beginning and who cannot be limited in any way). He stated that it was foolish, if not sinful, to refer to a mortal woman as the mother of the immortal God. 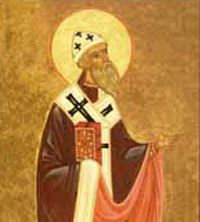 On the surface Nestorius’ argument seemed quite logical. But Cyril saw more deeply into the implications of his opponent’s point of view. If Mary is not the Mother of God but simply the mother of a man, he reasoned, then why should we worship him? In fact, offering worship to a mere man would make us idolaters!

Nestorius said that He believed that Christ consisted of two separate subjects (identities) one of which was human and the other of which was divine.When the Gospels spoke of the human subject (the one who hungered, was afraid of death, wept for his friend Lazarus, etc.), it was the man, Jesus, that they were referring to. When they spoke of the One who raised Lazarus and the son of the widow of Nain from the dead, who walked on water and stilled the raging storm, then it was the Eternal Word of God who was being referred to. For Nestorius the two were united in the “Christ”.

St. Cyril objected to this by saying that there could only be one ‘subject’ in Christ—only one ‘identity’, only one ‘Person’, the Eternal Word and only begotten Son of God. In this case, Mary, as the one in whose womb the Eternal Word of God took flesh, could and must be called the Mother of God. Of course, Cyril did not believe that Mary gave birth to the Son of God from all eternity. She gave birth to Him in the flesh, at a certain time and place in history—in the ‘fullness of time’ as the Scriptures teach (Galatians 4:4-5).

And that is very heart of why Cyril’s teaching matters so much. In the fullness of time God Himself became a man—a human being in the tininess of a young maiden’s womb, carried for nine months, born among animals in amanger, growing in wisdom and strength through the years of childhood and adolescence, preaching the Kingdom of God and doing miracles in His manhood, and suffering a violent death at the hands of His own creatures that He might rise in glory by His own divine power! God, Who is without beginning,Who is infinite and without any kind of limitations, became finite and limited, “emptying himself and taking on the form of a slave” (Philippians 2:7). The great mystery of the Incarnation, according to St. Cyril, is that we can truly say that God— personally—united Himself to our broken and limited condition in order to heal our nature and to restore us to communion with Himself.

He left nothing that is natural to us outside His experience. He took on a human body (from the moment of conception); He had a human mind, soul, will, emotions—everything that pertains to being human, while at the same time remaining unchanged in His divine nature. He became what He was not (human) while remaining what He was (the eternal, almighty, all knowing Word of God). We confess this every week when we sing:

Only Begotten Son and immortal Word of God, Who for our salvation willed to be incarnate of the holy Theotokos and ever-Virgin Mary, Who without change became man and was crucified,Who are One of the Holy Trinity, glorified with the Father and the Holy Spirit: O Christ our God, trampling down death by death, save us!

St. Cyril, as with all truly Orthodox teachers, was wise enough to say that this is a mystery beyond human comprehension. We can believe it, but we cannot fully explain it. In fact, Nestorius’ problem was exactly the same problem that all heretics have—he relied toom uch on intellectual reasoning alone to try and ‘solve’ the mystery of God. He attempted to put everything into neat, logical, categories, forgetting that the wisdom (logic/reason) of God is foolishness to the world and the foolishness of God undoes the wisdom of the world (see 1 Corinthians 1:21-25).

This directly relates, of course, to the great mystery we celebrate on Christmas—that a weak and tiny baby is at the same time the eternal God. He is not merely ‘veiled in flesh’, He is made flesh. He unites Himself fully and completely with human flesh, and He will never again be separated from it. We can never speak of Jesus without at the same time speaking of the Eternal Word and Son of God. Jesus is the Eternal Word and Son of the Father. JESUS IS GOD. And on that our salvation depends. If Jesus were a man somehow united to the Word of God (as ‘the Christ’—whatever that means), then we are not saved. Unless Jesus IS the Word of God made flesh, then He can do nothing for us. He would be nothing more than another prophet, as the Muslims teach.

St. Cyril, along with all the Orthodox teachers, confessed that the flesh of Christ is life giving because it has been united inseparably with God. The fact that we receive holy communion—believing it to be the “body of our Lord and God and Savior, Jesus Christ”—is a concrete statement of our faith that Christ is one, that He cannot be divided into a ‘human’ side and a ‘divine’ side. They is only One Christ, One Divine Person, who has taken on our human nature so that we might be lifted up from degradation, death, and satanic oppression.

Our faith is not ‘neat’. It does not accommodate itself to human categories of thought. It cannot be explained or contained by philosophical arguments. But neither can love. Love cannot be explained or contained in mathematical equations. It must be experienced. It must be given and received. It is a mystery beyond comprehension, and yet, anyone who has ever experienced it knows that it is real—perhaps the most real of all experiences. And in the end, the deepest and truest expression of God is that of Love. “For God so loved the world that He gave His only-begotten Son…”

St. Cyril knew that. Nestorius just couldn’t get it.

The mystery of Christmas is that Infinite and everlasting Love entered into the world, into our smallness, into our weakness, into our foolishness that we might one day be made great and strong and wise in Him—that we too might Love fully and without limit, even if we will never be able to find words to adequately explain it.