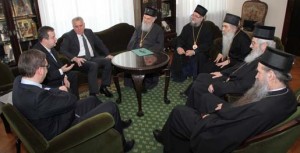 At the Serbian Patriarchate, on 8 April 2013, His Holiness Irinej, Serbian Patriarch, met with Mr. Tomislav Nikolic, President of Serbia; Mr. Ivica Dacic, Prime Minister of the Government of Serbia and Mr. Aleksandar Vucic, First Vice President of the Government of Serbia. The members of the Holy Synod of Bishops attended the meeting, Their Graces Bishops: Vasilije of Srem, Irinej of Backa, Jovan of Sumadija and Joanikije of Budimlje-Niksic.

Spokesman of the Serbian Orthodox Church, Bishop Irinej of Backa, addressed the media representatives after the meeting and said: “However, I am dismissing as improper and malicious all the insinuations that the Church allegedly wants to engage in politics and deliver decisions instead of the legally elected officials. That exists neither as an intention nor a thought. But if any non-government organization with small membership  thinks that it has a right to be consulted by the government of the state, then the Church has even more rights to do the same since its believers are at the same time the absolute majority of citizens of this country.“