Specifically with respect to Memorial Day, as an Orthodox Christian, we naturally raise the question: “Why would Americans set aside only one day a year to celebrate our departed loved ones?” Now, this question compels us to understand the history of memorial Day, which was originally set aside to remember the sacrifices of those who died in the armed conflict in the service of our country.
Priest Gregory S. Patsis | 24 May 2009 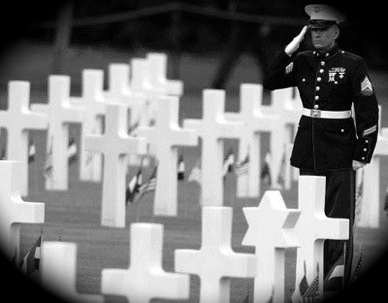 As Orthodox Christians living in a non-Orthodox society, we are constantly confronted with situations and circumstances that challenge our notions of our faith and tradition. And as with many of our American holidays, the commemoration of Memorial Day is cause to take pause and reflect upon what our Holy Tradition informs us of such celebrations of the dead and what to make of the American cultural expression that we observed this past weekend.

Consistent with our Orthodox understanding of life and our human adaptation to this worldly existence, we as Orthodox Christians do not need to set aside one day to be reminded of the importance of acknowledging all aspects of life, whether it be birth, growth and maturity or, finally, death. Specifically with respect to Memorial Day, as an Orthodox Christian, we naturally raise the question: “Why would Americans set aside only one day a year to celebrate our departed loved ones?” Now, this question compels us to understand the history of  memorial Day, which was originally set aside to remember the sacrifices of those who died in the armed conflict in the service of our country. So, from the onset, Memorial Day, (originally referred to as “Decoration Day” based on the efforts of Southern women to decorate the graves of both Confederate and Union soldiers who died during the Civil War), was a special, one-day commemoration.

So, it is not that Memorial Day is at all like our Orthodox “Psychosavvato” or Saturday of the Souls. It was always intended to be a one-day commemoration of a particular group of individuals; our fallen brethren in armed conflict. Yet, with the ever-increasing commercialization of all that is sacred, accelerated perhaps by of the U.S. Government to create a three-day, Federal holiday, Memorial Day has been reduced to the “official start of summer” and another three-day shopping opportunity. But another phenomenon has emerged with the commemoration of Memorial Day; what originally was intended to commemorate a select group of individuals is now an opportunity to remember all who have departed from this life. It has, in other words, become personalized; a most particular Orthodox trait.

When exactly did this special, unique one-day celebration of our fallen brothers and sisters in the armed forces transform itself into a day in which all departed loved ones are honored? The answer to this I could not determine; however, and this is the important part, the fact that it has been transformed into a more inclusive commemoration reflects a natural tendency in human beings. It is only natural that when one particular segment of our society is honored, that eventually all members of our society are so honored. In other words, it seems that in the case of death it is only natural for human beings to commemorate all the dead if we are going to commemorate any of our dead.

As Orthodox Christians, this natural progression should not be construed as somehow demeaning the meaning and significance of the sacrifice of our fallen brothers and sisters in the armed forces; but, rather, it should be construed as a noble and beautiful gesture of humanity that yearns to unite themselves, in body and spirit, with our loved ones departed this life. What originally was understood as a day to identify with those who gave up their lives for the noble cause of God and Country, is now more naturally understood as desiring to reunite ourselves, through prayer, to those who we continue to love regardless of the separation of time and space.

Given that the transformation of Memorial Day has taken root; from a holiday to commemorate a select group of individuals, our war dead, to one commemorating a broad group of individuals, all our departed brothers and sisters, it seems then that it is only a matter of time that this basic human need, to unite ourselves through prayer to those who have passed on from this life, will be done more frequently; let’s say, on Saturday’s throughout the year. Well, low and behold, such is the practice in our Holy Tradition of Orthodoxy. When our society, through the prayers and outreach of Orthodox Christians, comes to understand that the bonds of love, established by our Lord, God and Savior Jesus Christ, whether by blood or spirit, can never be destroyed, then naturally, Saturday of the Souls will be a much sought after church service.

Jesus Christ, “by death, trampling down upon death,” destroyed the chains of Hades and thus released “those held in prison” (from the prayers of the Trisagion Service.) Christ is Risen! So Death no longer has dominion over humanity hence our brothers and sisters merely repose awaiting the return of the Lord. Yet, even in their state of repose, they mysteriously our present with us, hearing our prayers to them and interceding with the Holy Ones of the Lord on our behalf. We, also, by natural inclination, yearn to ensure that our departed loved ones receive all the care and comfort in their state of repose that our Lord, as Immortal King, can provide them, so we offer our prayers on behalf of those we love.

The mark of an advanced and civilized society is one that does the same; for this we continue to pray.

Care for the Graves of our Beloved Brothers and Sisters

The following came to me via email; I hope you find it as enlightening as I did.

compiled from Orthodox Life, Vol.42, No.3, May-June, 1991; and “The Elder Joseph of Optina,” Holy Transfiguration Monastery,1984, Appendix B

We direct these words to all Orthodox Christians when the summer arrives, when almost all of us will visit the remains of a close one. Protect the graves of your loved ones. Preserve from disarray God’s vineyard from which the angels will gather the great harvest into God’s storehouses. Do not destroy the tombstones which were erected by loving hands. Do not disturb the peace and tranquility of those who have reposed from earthly cares.

Do you know where the custom of meticulously protecting graves from crude vandalism comes from? (It comes) from very early in the Christian era, from apostolic times. If we were to descend into the catacombs, where the first Christians buried their deceased brethren, we would see with what love they treated the tombs! What heartfelt, gentle, and deeply touching messages and images are engraved there! What light-filled faith breathes therein! Death itself is never called a misfortune, but the passing on to a better life; the deceased one rests in peace, his body is only temporarily given over to the earth, the cemetery itself is referred to as a place of rest. With what supplications did the Christians turn to people – not to disturb the sweet dreams of the departed, not to disturb their serenity! On the contrary they warned of damnation if the graves were disturbed.

While visiting a cemetery, who has not noticed how some tombstones are broken by some daring hand, how crosses and holy images are defiled. What sorrow this brings to the heart! Is it possible that they do not know what a great sin this is? The wrath of the righteous Judge does not always descend immediately, but God’s punishment will sooner or later come upon those vultures who have lost their conscience and sense of shame. Be wary of such a heavy sin. Do not disturb the peace and tranquility of those who have reposed from earthly cares.

Although grave robbing is not prevalent in America, on the other hand desecration of graves by occultists is widespread. For this reason one should carefully guard the sanctity of graves. Church tradition as recorded in the lives of saints teaches that the soul of the departed is present in a special spiritual way at the place of its burial. Therefore graves should be protected from desecration by occultists and properly maintained. Prayerful commemoration of the departed should be observed at the place of burial.

May the Orthodox pray for their non-Orthodox departed ones while visiting their places of burial?

Of course! But we ought not to pray in a self-willed manner, not as we wish and as it comes into our head, but according to the direction of persons experienced in the spiritual life. The Optina Elder Leonid gave an example of such prayer when asked by a spiritual child how he could comfort himself in the grief of his father’s death. The Elder Joseph points to this prayer as a model. One can pray for a non-Orthodox person in the following manner:

“Have mercy, O Lord, if it is possible, on the soul of Thy servant (Name), departed to eternal life in separation from Thy Holy Orthodox Church! Unsearchable are Thy judgments. Account not this my prayer as sin. But may Thy holy will be done!”

Experience has shown that such a prayer tempers the burning sorrow of the heart felt by the one praying for the soul of the person close to him, even though he died outside of Orthodoxy. We pray exactly as our Lord Jesus Christ taught His Apostles to pray, “Thy will be done!” This all embracing petition gathers within itself all our needs and the needs of all our brothers, even though they be non-Orthodox. In it we entreat the All-good Lord for the souls of the departed non-Orthodox Christians that He may accomplish with them that which is pleasing to His holy will. For the Lord knows immeasurably better than we to whom to show mercy and what mercy to show.