Memoriam: His Holiness, Patriarch Aleksy II of Moscow and All Russia

Source:  The Russian Orthodox Church Outside of Russia 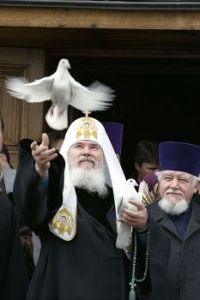 In truth, as St Symeon the New Theologian, says, “The beginning of life is the end, the end, the beginning, and I know not whence I come, where I am, I know not where I will go tomorrow.” Such is the lot of each mortal. And now, in our common funereal prayers, we see the bright image of His Holiness Patriarch Alexy, who was truly a kind and selfless podvizhnik, working for the rebirth of the Russian Orthodox Church, which arose from ruin after so many years of godless persecutions. The newly-reposed Patriarch was a preacher of repentance and the return of the Russian nation to its historic roots, its Holy Russian ideals.

I call upon my brother archpastors, clergymen and flock of the Russian Church Abroad to pray for the soul of His Holiness Patriarch Alexy

Metropolitan Jonah sends letter of condolence to His Grace, Bishop Mercurius of Zaraisk, Administrator of the Patriarchal Parishes in the USA, on the repose of Patriarch Aleksy II of Moscow

SYOSSET, NY [OCA Communications] — On December 5, 2008, His Beatitude, Metropolitan Jonah sent a letter of condolence to His Grace, Bishop Mercurius of Zaraisk, Administrator of the Patriarchal Parishes in the USA, on the occasion of the repose earlier that day of His Holiness, Patriarch Aleksy II of Moscow and All Russia.

“On behalf of the Holy Synod of Bishops, together with the clergy and faithful of the Orthodox Church in America, I express my heartfelt condolences on the falling asleep in the Lord of His Holiness, Patriarch ALEKSY II.

“The falling asleep of His Holiness is a tremendous loss for the Russian Orthodox Church and the entire Orthodox world.  In particular, His Holiness had a special relationship with our Church, being the guest of the Orthodox Church in America on several memorable visits.  He will be remembered as an excellent Church leader, a man of great spiritual insight, wisdom and pastoral understanding.

“His Holiness also possessed the wonderful quality of great personal warmth and sensitivity, which he graciously shared with me, as he did with thousands of other people.

“To Your Grace and the members of all of the Patriarchal parishes under your omophorion, we offer our sincere affection and brotherly love at this sad time.  Our mourning will be joined with yours and that of all of the hierarchs, clergy and faithful of the Russian Orthodox Church.  Also know that the memory of His Holiness, the newly-departed Patriarch ALEKSY will remain forever in our hearts and thoughts.

“May Our Lord and Savior, Jesus Christ, grant to His noble servant, His Holiness, the ever-memorable Patriarch ALEKSY, rest with the saints and make his memory to be eternal.”

Information on funeral services for His Holiness, Patriarch Aleksy will be posted on the OCA.org web site when it becomes available. 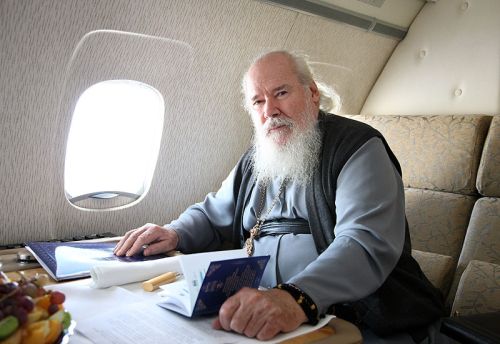 Metropolitan PHILIP writes to the U.S. Representative of the Russian Orthodox Church in the U.S.:

I greet you in the name of our Lord, God and Savior Jesus Christ who is the Resurrection and the Life of all who repose in him. 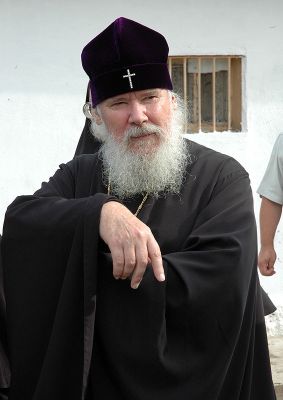 It is with great sadness that I awoke this morning to the shocking news of the passing into eternal life of His Holiness ALEXY II, Patriarch of Moscow and All Russia. The loss of this great man is not only a loss for the Church of Russia, but for the entire Orthodox world. I recall with great fondness the two occasions I had to be in his presence, once on his visit to the United States in the early 1990s when we hosted him at our Archdiocese Chancery and the second when I accepted his kind invitation to visit Russia in 1997. It was during this trip in 1997 that I came to realize the greatness of his leadership and vision for the Church of Russia and the Orthodox world at large. Having met with him at the Danielov Monastery and having served with him in the historic Dormition Cathedral in the Kremlin and again at the dedication of the awe-inspiring Christ the Savior Cathedral in Moscow (that he was instrumental in rebuilding as a symbol of the resurrection of the Russian Orthodox Church after more than 70 years of oppression), I felt assured that the Church would continue to thrive under his leadership.

Patriarch ALEXY lived in two worlds, one under the Soviet oppression of the Church and the other whereby he led the Church from glory to glory after the fall of Soviet rule. I have no doubt that this will be his legacy. The courage he showed by leading the nation through a difficult time that could have led to civil war when he addressed the country in the midst of the night, in the midst of darkness at 1:42 a.m. on August 21st, 1991 will stand out as one of the greatest addresses of the 20th Century. Out of this darkness, his address to the nation became a new light of hope for a new nation.

Like the captain of a great ship, he guided the Russian Orthodox Church through troubled waters, rejecting those who would take the Church backwards to pre-revolutionary monarchist times, and at the same time rejecting those who would liberalize the Church and make it something other than it had always been. At the same time, he capably oversaw the rebuilding and restoration of thousands of churches and monasteries, the reeducation of the faithful and the clergy and the reestablishment of the Church as a great force in the Russian Federation. His untiring work which led to the reunification of ROCOR and the Russian Orthodox Church is yet another example of his bold leadership.

Personally, I had the greatest respect for him on the level of international Orthodox relations. He adhered to and respected the canonical norms for territorial boundaries of sister churches and dealt pastorally with the uncanonical situation that we have here in North America and other places. While he often faced resistance, he led with integrity and love. As the leader of more than 100 million Orthodox believers, in my eyes, he was the true leader of the Orthodox world.

On behalf of our Local Synod and all the clergy and faithful of the Self-Ruled Antiochian Orthodox Christian Archdiocese of North America, please accept our sincere condolences. We ask that you extend our prayers and sympathies to His Eminence Metropolitan KIRILL and the Department of External Church Relations and the entire Holy Synod of the Russian Orthodox Church, praying that in the midst of this sad time, another great leader will arise from the depths of your sorrow and lead this great and venerable church to new heights.

Archbishop of New York and Metropolitan of all North America

NEW YORK – This morning, His Eminence Archbishop Demetrios of America received the sad news of the passing of Patriarch Alexy II of Moscow and All Russia. Archbishop Demetrios, who has known the late Patriarch for many years, had been with him in Moscow last May, and recently at the Synaxis of the Heads of the Autocephalous Churches in the Ecumenical Patriarchate of Constantinople, said in his letter of condolence to the Holy Synod of the Russian Orthodox Church:

On behalf of the Holy Eparchial Synod and the Clergy and Lay Faithful of the Greek Orthodox Archdiocese of America, I am offering our profound condolences on the falling asleep in the Lord of the most blessed Father of the Russian Orthodox Church, the deeply beloved and respected late Patriarch Alexy II. The passing of the Patriarch is a deeply felt wound not only for the pious Russian People, but for all Orthodox Christians who have admired his wise and pastoral stewardship of the Russian Orthodox Church during this most significant period of Her rebirth, after decades of very harsh times for Her.

Having learned that only yesterday the Patriarch served the Divine Liturgy for the Entrance of the Virgin Mary into the Temple, we take a measure of comfort from the knowledge that he is now within the Holy of Holies not-made-by-hands, and in the presence of the Theotokos and her Lord and Son.

Your Eminences and dearly beloved and respected brothers in the Lord, as you reflect on this incalculable loss, prepare to bid farewell to the beloved Patriarch Alexy II, and face the extraordinary task of electing his successor, please be assured of our prayers for you and all the pious Russian People. As we remember you in this time of national grief and mourning, we shall also offer our fervent supplications to God for him, that he may find the reward of “the faithful and wise steward” that he most surely was, and that he may rest in the blessed hope of the Resurrection of our Lord Jesus Christ. May his memory, the memory of this exceptional leader of the Church, be eternal.