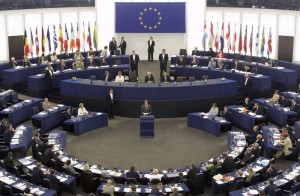 The European Parliament has passed a resolution, condemning violence and persecution against Christians in Syria, Pakistan, and Iran.

MEPs expressed “deep concern” on October 10 about the general situation of religious minorities in Pakistan, especially the Christian churches.

They urged the authorities to overhaul the blasphemy laws, saying they can be misused against people of all faiths.

European lawmakers also called for the immediate release of an American-Iranian pastor jailed for eight years for his role in establishing underground churches in Iran.

The resolution cited concerns that Saeed Abedini may have suffered “physical and psychological violence” in prison.

In a separate resolution, MEPs condemned acts of terrorism and sectarian violence in Iraq.

They said all leaders and players in society should “start to work together to end the bloodshed.”

With reporting by AFP