Mercy As a Way of Life

A red cross on a white scarf, a white apron, and a modest gaze… One can meet these unusual women everywhere there are people in need, from prisons to closed psychiatric institutions. In Ukraine the largest community of sisters of mercy is in Kiev, at the Church of St. Michael, first Metropolitan of Kiev, on the grounds of the Alexandrov Hospital. ForUm paid them a visit to learn about the life of these modern sisters who have dedicated themselves to serving this noble cause. 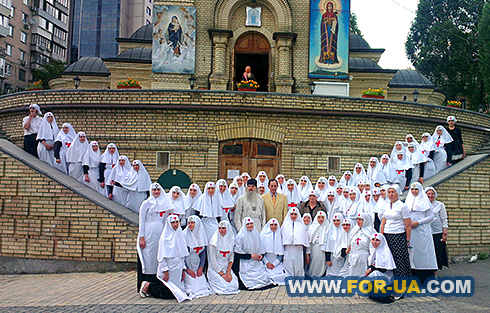 The first accounts about help given by sisters of mercy to the suffering date back to the Middle Ages. Communities of sisters existed in the East (Constantinople, Beirut, Jerusalem, Cairo), in Germany, and in Protestant churches in Russia (St. Petersburg, Vyborg, Riga). Beginning in the middle of the nineteenth century, Protestant nuns and sisters of mercy continually cared for the wounded during military hostilities. In the Russian Empire, voluntary care for the wounded arose as a social movement during the Crimean War of 1854-56. Two courageous women from warring countries – the Englishwoman Florence Nightingale and the Grand Duchess Elena Pavlovna of Russia [formerly Princess Charlotte of Württemberg], the wife of Grand Duke Michael Pavlovich, brother of Emperor Nicholas I – began actively helping soldiers whose blood was being shed on the battlefield.

One of the most famous followers of this moment in Russia was the Grand Duchess Elizabeth Feodorovna, who in 1909 founded the Martha and Mary Convent of Mercy, which resembled a monastic house in its rule of life. A hospital, an outpatient clinic, a pharmacy, a home for orphaned girls, a Sunday school, a library, and a soup kitchen were all constructed in the convent. The Grand Duchess herself, along with her pupils, spent sleepless nights as a nurse at the beds of the seriously ill, assisted at operations, and visited Moscow slums. The sisters lived in the religious community itself, where they followed a monastic way of life without themselves being nuns. They gave temporary vows (for one, three, or six years, and only later for life) and had the option of leaving the convent to get married or of being tonsured directly to the small schema.

The noble work of the sisters of the Convent of Martha and Mary and the martyrdom of its superior served as the ideological impetus for the emergence of a multitude of such communities of mercy in the late 1980s and early 1990s throughout all of historical Russia.

The Sisterhood of Mercy dedicated to the Grand Duchess Elizabeth and the Nun Barbara opened in Kiev in 1998, founded by Fr. Roman Baranovsky, rector of the hospital church dedicated to St. Michael, first Metropolitan of Kiev. Now 145 sisters carry out their obediences at this church.

Their white garments with crosses can be seen as soon as one enters the grounds of the Alexandrov Hospital. Each is busy with numerous obediences.

From noon until late at night there is a line of people around the refectory church waiting to warm themselves and be fed. The sisters prepare and serve food to all comers.

The Psalter is read continuously in church. This is a fairly rare practice, normally performed only in monasteries and convents.

The sisters carry out their obediences in the church and refectory and visit the sick… The principle task of sisters of mercy is to help, comfort, and be with those needing help during difficult times.

Even if today the sisters do not need to remove wounded soldiers from the line of fire, their work has not become any easier. Just as before, their work multiplies good, bringing warmth to every heart.

As St. Inna, a senior sister, told ForUm, today there are around twenty communities of sisters of mercy active in Orthodox churches in Ukraine, the members of which care for the sick, feed and clothe the homeless, and provide religious education.

At the present time, these sisterhoods’ social projects receive no funding from the state, for which reason the sisters are forced to raise funds on their own.

“All of our funds come from the private donations of parishioners and people who want to help their neighbors,” explains Sister Inna. “For this, sisters go through the markets with donation boxes to collect offerings. This is one of our most difficult obediences. Today love and mercy are not a priority for people. These qualities of soul are not profitable, so the practical world rejects them. But it is thanks to such qualities of soul that a human being can remain a human being, able to love and sacrifice himself for his neighbor. The sisters explain to people that the funds collected are used for the needs of the suffering, people in even more difficult circumstances than their own.”

In order to have at least some source of regular income, the sisters opened a kiosk on the grounds of the church. The earnings go towards purchasing food and medicine for people seeking help.

The sisters also minister to the patients of the psychiatric hospital in Glevaha [outside Kiev] and regularly visit the Orthodox community in the women’s penal colony in Chernigov.

Today we are going with Sisters Catherine and Julia to the Alexandrov Hospital to check on Yuri, who yesterday had a difficult operation on his leg.

“Helping the sick is not simply a matter of turning them over on their beds or of bringing them food,” says Sister Catherine. “It is about helping people spiritually. If God has placed you on your sickbed, that is already a sign that you should review your whole life – since we are not meant to get sick, but do so because of sin. The sisters prepare Orthodox patients for Confession, invite priests, and bring holy water and spiritual literature. We have even had cases of people who wanted to accept the Orthodox faith and were baptized right in the hospital. The most important task of a sister of mercy is to help the ill to love their illnesses. When someone comes to terms with his illness ­– when he can say, ‘Lord, may Thy will be done’ – then there are cases when everything goes away without any further assistance.”

If someone without means enters the hospital, the sisterhood helps him to acquire the medications he needs.

Yuri had already been brought breakfast this morning, so now it was time for conversation and reading.

Those in the beds next to him were a bit envious of the attention the young man was receiving. The sisters offered them holy water and books.

The life of mercy is not easy, just as their paths leading to it were not easy.

Sister Catherine has been fulfilling her obedience in the sisterhood for ten years already.

“First my youngest son died at the age of twenty-seven, and then my mother died. After that I started coming to this church. Hearing Fr. Roman’s preaching warmed my soul, so I reached out here to serve God. I left on a procession in September ten years ago, and I am still here,” she told ForUm.

Despite her youth, Julia has been a sister of mercy for four years now. With the rector’s blessing, she regularly travels to the Alexander Nevsky Compound in Jerusalem on obedience.

“Our sisters go there by rotation for three months,” she said. “They prepare food, clean, look after the orderliness of the compound, and greet pilgrims. Sometimes they lead tours. As is done here, they also read the Psalter continuously.”

Sr. Inna, the senior sister, has three children and her husband carries out his obedience in the skete.

“I had a completely normal life. I was raised in full atheism, inasmuch as my parents held high-ranking positions under the Soviet regime. It was the same in school: I participated in all the relevant rallies, speeches, and lessons of atheism. But my Orthodox genes nonetheless took hold. Orthodoxy has been in Rus’ for 1,000 years and in every family there are Orthodox people who have pleased God. By their prayers, the Lord leads us onto the path of salvation. We begin to look for the meaning of life and to feel dissatisfaction with what we see around us. Sorrows hasten this process of understanding. My first son has been seriously ill since childhood, but this was not the only thing that changed my life dramatically – although it likely hurried it along in the right direction. I always had an inner quest. One cannot live without faith; one will always believe in something. Even an atheist believes that there is no God, although his faith is meaningless.”

Sr. Inna, the senior sister, told us that any woman can become a sister of mercy, but that she is first required to pass through a trial period.

“Those sisters who come to us and say ‘I want to be a sister of mercy,’ generally look at this as completing some sort of workload. This is a Protestant approach to Orthodox social service,” she explains. “In Orthodoxy, sisterhoods are inextricably bound with spiritual growth. We do not help our neighbors simply for the sake of helping. It is more important for us to lead someone out of his state of helplessness, depression, and disbelief. The sister’s task is to reveal to a person the spiritual principles that led him to his state of distress. A sister’s trial period is a sort of novitiate to the sisterhood, and is unique for each person. During this period they receive training and attend spiritual discussions covering the principles of Orthodoxy. It is difficult even to imagine how much effort it takes the sisters to overcome their accustomed indifference, hardheartedness, and selfishness. After all, it is only by changing yourself that you become capable of changing others. Mercy is sacrifice. Self-sacrifice is very difficult, for it is the beginning of the love of God. It is when you give away your last piece of candy that Orthodoxy only just begins.”

Sister Inna insists that their sisterhood is only a school of sisters of mercy, among whom there is no genuine Elizabeth Feodorovna.

Today the sisters of mercy dream of the state creating social projects alongside the Orthodox Church, in which they would be able to take part. With such support they could create a community like the Martha and Mary Convent in Moscow and live near the church, open handiwork shops, and even open their own hospital, in which sisters with professional medical training could work.

For the time being, the heirs of Elizabeth Feodorovna’s great work continue their difficult everyday work, offering a good life to those in need.

Translated from the Russian version published on the ForUm website, November 8, 2012