Message of Kornelius Mitropolitan of Tallinn and all Estonia

The Estonian government, ignoring the position of the city authorities based on the opinion of the members of the roundtable on the “Bronze Soldier” issue, and disregarding the statements and opinion of many other local and foreign political and societal activists and organizations and, moreover, contrary to common sense, just before the celebrations dedicated to the victory over Nazism, began the process of transferring the monument to Soviet soldiers who perished during the Second World War. The process started on April 26, 2007 in Tallinn.
admin | 04 May 2007 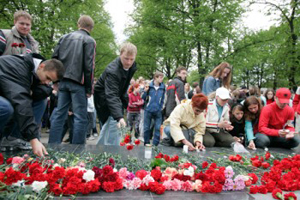 The
Estonian government, ignoring the position of the city authorities
based on the opinion of the members of the roundtable on the “Bronze
Soldier” issue, and disregarding the statements and opinion of many
other local and foreign political and societal activists and
organizations and, moreover, contrary to common sense, just before the
celebrations dedicated to the victory over Nazism, began the process of
transferring the monument to Soviet soldiers who perished during the
Second World War. The process started on April 26, 2007 in Tallinn.

The
matter itself is not in the fact of the actual re-interment of the
remains but in the attitude towards history and duty. For many years
this place was sacred for all those, who understood that Nazism was
fatal for the humanity. It was sacred for all those, who honored the
memory of the fighters who sacrificed their lives so that all of us now
could live in a free society (it’s well known that in every family
there were killed, disabled, or missing people after the war).

What
was the reason for transferring the monument that was not glorifying
the punitive troops or institutions of repression? It is intolerable to
be lenient towards distorted stereotypes which interpret the monument
as the symbol of occupation.

The monument symbolized those
fighters who sacrificed their lives to save ours; there was no purpose
to subjugate Estonia and other liberated countries by a Communist
dictatorship in the end as some politicians try to interpret it. By
imposing on society the point of view that this monument is dedicated
to the occupiers, they essentially are guided by the stereotype of the
Soviet ideology according to which the army and the Communist Party are
indivisible.

However, there was no such a unity. People of
different nationalities, religions and beliefs fought together in the
Soviet Army. Some soldiers were saddened by the Communist ideology, but
others were not. Many suffered under Soviet power and had no warm
feelings towards it.

It is not a secret that some fought bravely
and others besmirched the honor of the armed forces. The monument,
however, was dedicated to the soldiers of different nationalities and
beliefs who were selflessly fighting united by one single desire – to
free their own and other peoples from Nazism.

The “Bronze Soldier” was a symbol of honor and dignity for all those who revere the memory of fallen heroes.

And therefore it is quite natural that people protested against the attempt to exile the monument to the cemetery.

It
is much worse that those who supported a rightful cause, could not
control themselves and allowed their low passions to prevail; they gave
in to the provocation and behaved unworthily towards the memory of the
perished worriers by acting in the favor of those who unleash ethnic
hatred. It is bad that the innocent had to suffer.

The
Estonian Orthodox Church of Moscow Patriarchy is praying for the
politicians and ordinary people to make common sense prevail over
emotions with the God’s support after all these events. The Church also
prays for peaceful life of people of different ethnic backgrounds in
our country.

CHAIRMAN OF THE SINOD OF EOCMP

The Bronze Soldier (Estonian: Pronkssõdur), originally Monument to the Liberators of Tallinn, sometimes called the Tõnismäe Monument, was a Soviet World War II war memorial designed in the socialistic realist style and located in
central Tallinn, Estonia. The memorial was erected by the city of Tallinn and unveiled on September 22, 1947, on the third anniversary of Red Army re-entering Tallinn in 1944.

The monument
consisted of a mastaba-like stonewall structure of dolomite and a two meter (6.5ft) bronze statue of a soldier in a Soviet uniform.
It was located on Tõnismägi (literally:
“St. Anthony’s hill”) above a small mass grave of reburied Soviet
soldiers’ remains, created in April 1945. The statue had significant symbolic
value to Estonia’s community of
mostly ethnic Russian post-World War II immigrants; not only symbolizing
Soviet victory over Nazi Germany in the Great Patriotic War, but also their claim
to rights in Estonia.

Amid
political controversy, in April 2007 the Estonian government started
preparations for the relocation of the statue. Although the general intention
had been public since the winter, no specific timeline was released in advance.
Disagreement over the appropriateness of the action led to mass protests and
two nights of the worst rioting Estonia has seen. In the early
hours of the first night’s rioting, the Estonian government decided at an
emergency meeting to dismantle the monument immediately. By the afternoon of April 27, 2007 the stone structure had been dismantled. As of the
afternoon of April 30 the statue without the mastaba had been placed at the Estonian Defense Forces Military
Cemetery in Tallinn. An opening ceremony for
the relocated monument is planned for May 8, VE-Day. (Significantly, Red
Army veterans celebrate Victory Day a day later, on May 9.) Reassembling the mastaba and reburial of the
remains of the war victims found in the graves under the monument are expected
to be completed by end of June. (from Wikipedia)