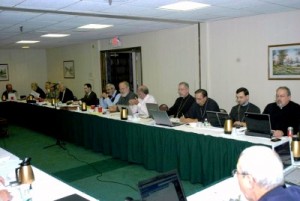 Members of the Metropolitan Council of the Orthodox Church in America will gather at the Chancery here for their fall session September 23-26, 2-13.

According to Archpriest Eric G. Tosi, OCA Secretary, the session will begin with a one-day retreat at which Priest Nicholas Solak, Rector of Holy Trinity Church, Stroudsburg, PA, and Dr. Albert S. Rossi, Director of Field Education at Saint Vladimir’s Seminary, Yonkers, NY, will address the issue of conflict resolution.

“The retreat,” said Father Eric, “is the most recent in a series that had been recommended by the Metropolitan Council’s Internal Governance Committee as a means of professional and group development.”

In addition to His Beatitude, Metropolitan Tikhon and the members of the Lesser Synod of Bishops, the chairs of two of OCA’s departments also will participate.

“As part of a rotating cycle that aims to bring in departmental chairs to update Council members on their ministries, the Department of Evangelization’s Priest John Parker and Mrs. Donna Karabin of theDepartment of Christian Service and Humanitarian Aid, will report on accomplishments and future plans in their respective fields,” Father Eric added.  “At the Council’s spring 2013 session, reports were received from the Departments of Continuing Education and Youth, Young Adult and Campus Ministry.”

In addition to the report of the Chancellor, Archpriest John Jillions, Mrs. Melanie Ringa, Treasurer, will present the proposed 2014 budget, which reflects the second round of assessment reductions as mandated by delegates to the 16th All-American Council in 2011.

Preliminary plans for the 18th All-American Council, slated to convene in 2015, and the composition of the Preconciliar Commission will be considered in depth.  Finalized proposals will be forwarded to the Holy Synod of Bishops for approval.

The Metropolitan Council, as defined in Article 5 of the Statute of Orthodox Church in America, “is the permanent executive body of the Church Administration which exists for the purpose of implementing the decisions of the All-American Council and continuing its work between sessions.”

Chaired by the Metropolitan, the Council’s membership includes the Chancellor, Secretary, and Treasurer; one priest and one lay from each Diocese, elected by their diocesan assemblies; three priests and three lay elected at the All-American Council.

Minutes, reports and updates of the meeting will be posted on the OCA web site as they become available.