On June 18, 2012, Metropolitan Hilarion of Volokolamsk, head of the Moscow Patriarchate’s department for external church relations, arrived in Beijing for the 2nd consultations of the Russian-Chinese group for contacts and cooperation in religious sphere.

He was met at the airport by Ye. Tomikhin, minister-counsellor of the Russian embassy in China, A. Povalyaev, first secretary of the embassy, Ms Syao Hun, deputy director of the State Administration for Religious Affairs’ department for international relations, and Mr Hao Zhuyang of the SARA Fourth Department.

On June 19, the commemoration day of St. Hilarion the New, Metropolitan Hilarion celebrated the Divine Liturgy at the Cathedral of the Assumption in the Russian Embassy in Beijing, in which the Russian Orthodox Mission used to be located in China. 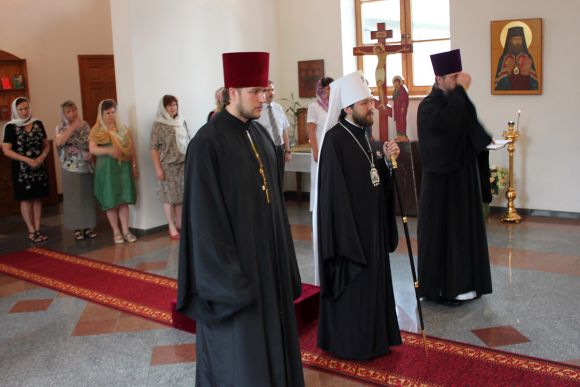 Present at the service were members of the international Orthodox community in Beijing. Most of them partook of the Holy Communion.

After the service, Metropolitan Hilarion was warmly greeted by Father Sergiy Voronin, dean of the cathedral, who congratulated the DECR chairman on this name day and the 25th anniversary of his monastic tonsure.

‘People’s fate develops mysteriously, but God’s Providence is visible in the life of each. When in the late 17th century a group of Albasian Cossack captives were brought to Beijing, they hardly thought at that moment about themselves as apostles. But it was their coming to this place that made the beginning of the Chinese Church which is alive to this day and is in strained circumstances now. A special link of times is felt here, a link with those who found rest in this soil, who were exiles here but did not forget their Orthodox faith. Their descendants, citizens of China, keep up the faith of their fathers.

‘And you, too, keep the Orthodox faith and remember that the Eucharist helps people carry their life cross. You all came to Beijing by various ways and kept the memory of your native land and hope for return. Prayer in the church enables us to keep the memory of the Heavenly Homeland, the Heavenly Jerusalem, which is the same everywhere, be it Moscow or Beijing. It is communion that united us in Christ and makes us citizens of the Heavenly Jerusalem. Being exiles on the earth, we feel themselves citizens of the heavenly city. For communion unites us with Christ not only spiritually but also in our nature. His Body becomes our body and His Blood becomes our blood. This Sacrament accomplished in human history uninterruptedly since the Last Supper unites us into the Church…

Let us ask the Lord to help us keep the faith and hand it down to children. Let us pray that Orthodox faith may flourish in Russia and China.’