November 29, 2012 – Metropolitan Hilarion of Volokolamsk, head of the Moscow Patriarchate’s department for external church relations, met with Syria’s ambassador to Moscow Dr Riad Haddad and representatives of the Association for the Support of Families of the Dead ‘July’. 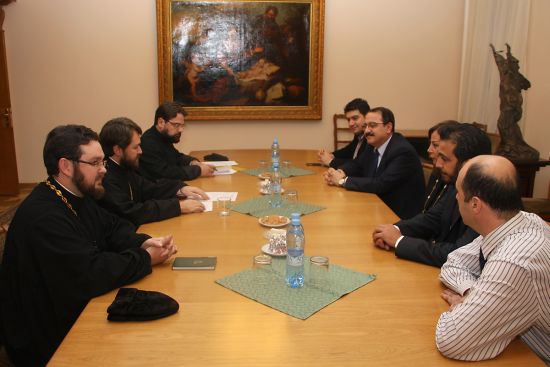 Dr. Haddad spoke of the recent developments in Syria, and Ms Mrakkadi of the July Association described the miseries experienced by Syrian Christians as half of them were deprived of shelter as a result of the hostilities and needed medicines and normal food. She spoke about the mass exodus of Christians from Syria. Thus, in the city of Homs there is not a single Christian left, while in Aleppo about 70% of Christians have fled the city. Most of them are now in Damask and its suburbs. The situation of refugees is constantly worsening with the coming of cold weather and halting of humanitarian aid supplies. The guests from Syria also related some details about the murder of Christians, many of them killed barbarically. However, despite this, many Christians wish to remain in their homeland even in face of danger.

Metropolitan Hilarion, on his part, stressed that Russia was the only country which consistently upheld the position of a peace settlement of the conflict in Syria. He told the guests about the Russian Orthodox Church’s efforts aimed to support the suffering brothers and sisters in the Middle East and North Africa. ‘The Holy Synod has made several statements in connection with the intensified persecution of Christians. In late October, I made at Session III of the UN Committee a report on the discrimination of Christians in the world’, he said.

Metropolitan Hilarion expressed concern that Christians in Syria may face the fate of Christians in Iraq whose number has decreased almost tenfold. In this connection, he pointed to the need of joint efforts for protecting their right to live in their native land.

He said the defence of the persecuted brothers and sisters in the Middle East and North Africa is one of the most important and urgent tasks, and the Russian Orthodox Church is ready to join those who render humanitarian aid to Syria.