Source: ROCOR
Epistle of the Council of Bishops of the Russian Orthodox Church Outside of Russia.
Metropolitan HIlarion of Eastern America and New York | 06 July 2014 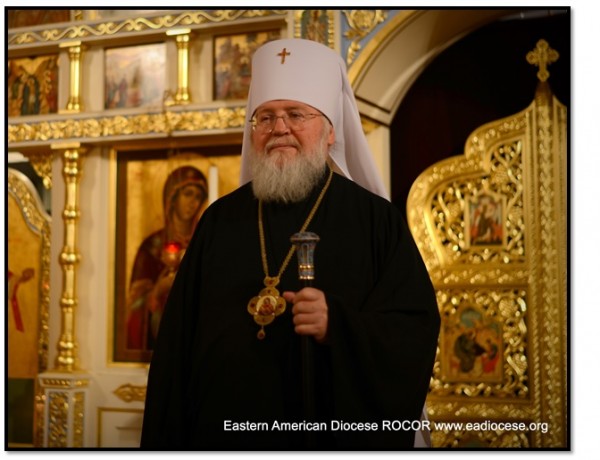 We, the hierarchs of the Russian Orthodox Church Outside of Russia, having convened a regular session of the Council of Bishops in the God-preserved city of San Francisco, hereby mark an important spiritual event in Church history. It was here, where by God’s will, the oldest cathedra of the Russian Church Abroad was established, and which is now the last hierarchal cathedra according to the world clock, once occupied by St John, Archbishop of Shanghai and then of San Francisco. We celebrate the 20 th anniversary of his glorification this year . Here also lie the holy relics of St John, here thousands and thousands of pilgrims gather. During these days, the All-Diaspora Russian Orthodox Youth Conference is convening, in which our hierarchs are also participating.

Marking this anniversary on Sunday , June16/29, during Divine Liturgy at the Cathedral of the Mother of God “Joy of All Who Sorrow,” the nominee of the Council of Bishops, Archimandrite Nicholas (Olhovsky), was consecrated to the episcopacy as Vicar of the Eastern American Diocese, with the title of Bishop of Manhattan. The Council of Bishops congratulates His Grace Bishop Nicholas and wishes him Divine aid in his archpastoral service to the Holy Church, and asks the God-loving flock to remember the new Bishop Nicholas in their prayers.
St John, the wonderful miracle-worker and Righteous saint of God was fated to become the first glorified Russian saint who shone outside of the borders of Russia, outside the borders of our Fatherland. The Lord manifested through him miracles of healing, here the love-filled heart of St John prayed for us with utter empathy, rejecting no one.

The descendant of the southern Russian noble family of the Maximoviches, which had already given Rus a holy hierarch, Metropolitan John of Tobolsk, Vladyka John of Shanghai and San Francisco never forgot his earthly homeland—Kievan Rus. In his childhood and youth, he more than once visited Dormition of the Mother of God Lavra of Svyatogorsk, where in our days, almost within its very walls, blood is spilt by those who die in internecine war.

In the akathist to St John, he is worthily called “a miracle worker of latter days,” but the hierarch was not alone. It is no accident that almost in the same years of his service in the diaspora, in the lands of his fathers, now part of the Ukrainian state, Holy Monks Lavrenty of Chernigovsk (who reposed in the Lord in 1950), and Kuskha of Odessa (the 50 th anniversary of whose death will be marked in December), suffered for their homeland of Ukraine.

How do they now look upon what today, indeed in these very hours and minutes, is happening in their much-suffering lands?

May the Lord not allow the 100 th anniversary of the onset of World War I, which initiated the terrible catastrophes not only for Russia, but for the whole world, spark new fatal sufferings and killings in Eastern Europe.

War always leads to more war. Barely two decades passed from the start of the First World War, when in 1934, 80 years ago, the pious monarch, the godson of Emperor Alexander III, Yugoslavia’s King Alexander, friend of Orthodox Rus and defender of Russian refugees who found asylum in his Kingdom, was killed. Thence, World War II became inevitable.

But 2014 should not be bound exclusively with dark foreboding. For this year we mark the 700 th anniversary of the birth of St Sergius of Radonezh. This date has a special, Providential meaning for the founding by the holy man of Holy Trinity-St Sergius Lavra, and for the fate of historical Russia. In the words of historian Vasily Klyuchevsky, the name of St Sergius recalls in the minds of the people their moral rebirth, which enabled the renascence of the state.

That is why one of the main challenges of the Russian Orthodox Church, in the Fatherland and in the diaspora, is to lead the people of Russia to church, so that through this process we could return to the piety of our forefathers of Holy Rus, which in turn leads to the salvation of all.

Hoping for the prayers of the Holy Fathers, the sons of Kievan Rus, let us humbly pray for the softening of hardened hearts, and for the end of internecine strife. The long-suffering Lord, deriving “no pleasure in the death of the wicked; but that the wicked turn away from his way and live,” may He keep “the world from falling into the abyss which is prepared for it,” as foretold by St Kuksha of Odessa. Let us call to untiring prayer all of our God-loving flock, for today more than ever we are in need of unity within Christ Jesus. For this reason, we appeal to our brothers and sisters in the Fatherland and abroad: before it is too late, let us set aside all divisions and strife, remembering the words of our Savior: “By this shall all men know that ye are my disciples, if ye have love one to another” (John 13:35 ), and let us seek shelter within the boundaries of the Holy Local Russian Orthodox Church, our common Mother. We do not know how much time is given to each of us to come to our senses and to repent, so let the Lord grant us, with spiritual joy which shall be shared by us all, to the measure given to each of us, to serve towards the new renascence of Holy Rus.

Paschal Epistle of His Eminence Metropolitan Hilarion of Eastern America and New York, First Hierarch of the Russian Church Abroad

CHRIST IS RISEN! The blessed and all-joyful night of the radiant Resurrection of Christ has come again, eminent…

It is with pain of heart that I am following the events unfolding in California, which is engulfed…

Paschal Epistle of His Eminence Metropolitan Hilarion of Eastern America and New York, First Hierarch of the Russian Church Abroad

Most viewed articles
Good News from His Eminence Metropolitan Joseph158
Courage,  Anyone?106
The Emigration of Abraham79
Moleben for Peace in the Holy Land to Be Held Tomorrow in Moscow72
By Love and Loyalty to God Women Build Up the Church68
Go and Proclaim the Good News44
Metropolitan Onuphry Gives Advice on How to Make Important Decisions28
Metropolitan Hilarion: “Human Life Must Be Protected Even at the Embryo Stage”24
Most popular authors
Archbishop Joseph of New York and Metropolitan of All North America158
Pravmir.com team124
Archpriest Geoffrey Korz106
Archpriest Lawrence Farley79
Metropolitan Hilarion (Alfeyev)67
Priest Luke A. Veronis44
Maria Trushanina1