On June 17, 2012, DECR Chairman Metropolitan Hilarion of Volokolamsk, after the Divine Liturgy celebrated at the church of Our Lady the Joy of All the Afflicted in Moscow, conveyed 20 thousand copies of Holy Scriptures for free distribution to military units and penitentiaries. The copies were printed with the support of the St Gregory the Theologian Charity. Present at the ceremony were Bishop Irinarch of Krasnogorsk, chairman of the Synodal Department for Prison Service, Archpriest Dimitry Smirnov, chairman of the Synodal Department for Cooperation with the Armed Forces and Law Enforcement, and Archpriest Vladimir Silovyev, editor-in-chief of the Moscow Patriarchate Publishers. 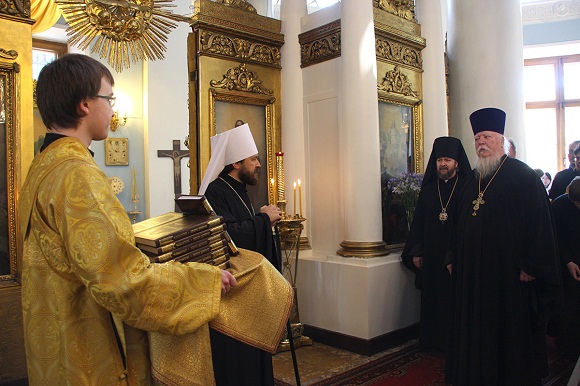 Addressing those present, Metropolitan Hilarion said in particular: ‘With my blessing, the St. Gregory the Theologian Charity together with the Moscow Patriarchate Publishers began printing copies of Holy Scriptures including the New Testament and Psalter, for free distribution to military unites and prisons in which people have had no opportunity as yet to come in touch with the Word of God. I wish that every Orthodox Christian, wherever he may be, in the army or, for some reason, in prison, on a train or in a hotel, could have a copy of Holy Scriptures ready at his hand. For this reason, we have printed this edition in yet a small number of copies, 20 thousand, but we will continue the task we have initiated so that every Orthodox serviceman and every prisoners who confesses Orthodoxy and wishes to read Holy Scriptures could have an opportunity to do so’.

Bishop Irinarch thanked Metropolitan Hilarion for the copies and spoke briefly about how the Russian Orthodox Church has carried out pastoral work with inmates of penitentiaries.

Archpriest Dimitry Smirnov, on his part, thanked Metropolitan Hilarion and Archpriest Vladimir Silovyev for the edition and reported that most of the copies will be sent to the military serving in Chechnya within the next few days.

Should One Kill Moles? Or, How to Avoid Falling Into Traps While Reading Contemporary Orthodox Literature

Something happened that led me to write this work. Somehow, while correcting papers on one and the same…

The more Fr. John discovered about Orthodoxy, the more he spoke of it in homilies and lectures. In…

If we have not found ourselves in a Moslem environment due to increased migration and conversion to Islam,…