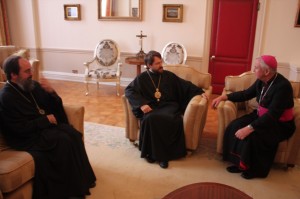 On September 24, 2013, Metropolitan Hilarion of Volokolamsk, head of the Moscow Patriarchate’s department for external church relations, during his working visit to London, met with Archbishop Vincent Nichols of Westminster (Roman Catholic Church). They talked about Orthodox-Catholic relations, the state of religion in the modern society and prospects for students’ exchange between theological schools.

The DECR chairman informed Archbishop Nichols about the present state of the Orthodox-Catholic dialogue, the Church’s situation in Russia and the character of church-state relations in the post-Soviet space. The Archbishop of Westminster told his guest about the initiatives of the Roman Catholic Church in England, her charity projects, priority tasks and the difficulties experienced by the Church in the secular society.

They gave special attention to the crisis situation in Syria. Metropolitan Hilarion told the head of the Catholic diocese of London about the initiatives made by the Russian Orthodox Church to help overcome the crisis and the cooperation of leaders of various Christian Churches in these efforts.

Most viewed articles
First Church in the Antiochian Archdiocese Named for St. Xenia of St. Petersburg Prepares for Feast Day290
Patriarch Kirill: Not Only People, But Churches Too, Can Depart from God178
My World’s Different105
A Christianity of the Catacombs105
Patriarch Porfirije of the Serbia: Our Position on the Church Issue in Ukraine Has Not Changed90
Thoughts on Theophany and Revelation82
Archbishop Makarios of Australia: ” the Great privilege of the Orthodox Church is that we live in communion”39
1
Most popular authors
Pravmir.com team597
Protopresbyter Themistoklis Mourtzanos105
Archpriest Lawrence Farley105
Elissa Bjeletich82